How Did Plate Tectonics Get Started on Earth?

by Dr. Andrew A. Snelling on March 2, 2016
Featured in Answers in Depth
Share:
Email Using:
Gmail Yahoo! Outlook Other

It has long been a puzzle to secular geologists as to how conventional slow-and-gradual plate tectonics got started. But recently a multi-national research team, led by geophysicist Taras Gerya at ETH-Zurich in Switzerland, has claimed to finally have a solution. Their co-authored paper was published on November 12, 2015, in one of the leading weekly science journals.1

It is currently widely believed among secular geologists that early in the earth’s history the earth’s entire surface was covered by a thick, cold, and buoyant layer of basaltic crust that acted to keep the earth’s surface rigid and motionless. It has therefore been a puzzle how plate tectonics might have gotten started under these unfavorable, early conditions. By contrast, in today’s world, new subduction zones seem to be explainable through existing plate forces and existing zones of lithospheric (crustal) weakness. But in the scenario secular geologists imagine for the early earth, there are no zones of lithospheric weakness or any plate-driving forces.

Oceanic plates sliding under continental plates produce many distinctive features that can be explained only by this “subduction.”

So how do these scientists believe their research has solved this perceived problem? They concluded that subduction initiation processes must have been markedly different in the past! In other words, the present is not the key to the past! Flood geologists have been saying this for almost two hundred years, ever since Charles Lyell started his crusade to rid geology of Moses, that is, the biblical account of the Flood in Genesis 6–9. After all, God was there in the past as a reliable eyewitness to tell us in writing what happened, unlike Lyell and his adherents who were not.

They came to this discovery and conclusion by first recognizing that the Caribbean Large Igneous Province, a hot, buoyant plateau of oceanic crust created by vast rapid outpourings of humungous quantities of lavas unlike anything we experience today, formed due to the arrival of a large mantle plume head beneath the oceanic crust in the Caribbean. The molten rock being injected up through that plateau weakened it, eventually causing it to collapse. That then induced its edges to override the surrounding oceanic crust, pushing it down, deforming and weakening it until it ripped, thus producing several independent downwarped slabs. These cold, dense slabs immediately started to sink into the mantle, and so subduction zones were off and running. Today in the same region, slow plate movements are still causing deadly earthquakes and volcanic eruptions.

The next step for this research team was to explore whether a similar mechanism might have been responsible for initiating subduction and thus plate tectonics back during the Precambrian (so-called because in the biblical framework those strata are from before the Flood). Previously such a mechanism had been investigated by two members of this research team by means of two-dimensional (2D) thermomechanical modeling.2 However, a mantle plume’s interaction with the lithosphere (crust) is intrinsically a three-dimensional (3D) process. So this research team designed a 3D high-resolution plume-lithosphere interaction model that allows for self-organization of new plate boundaries.

Once started, this 3D thermomechanical modeling proceeded through five stages:

In the first stage, hot rock rises from deep in the mantle in a plume, and when the plume head reaches the uppermost mantle, melting occurs to produce magma which rises to the earth’s surface and erupts to form the hot, buoyant plateau of oceanic crust, at the same time weakening and thinning the underlying lithosphere.

In the second stage, the magma continuing to push up through the plateau weakens it so that its edges collapse and thrust radially outward over the surrounding cold, oceanic crust. This surrounding cold oceanic crust bends down and penetrates into the mantle, which causes the formation of an incipient trench (a depression in the ocean floor) around the plateau’s margins, and becomes a nearly circular slab, which starts descending around that incipient trench.

This inevitably leads to the third stage in which the circular slab tears away from the plateau’s margins under its own weight, resulting in the formation of several self-sustained retreating subduction zones in the fourth stage.

Thus in the fifth stage, the pulling on the oceanic crust between the retreating subduction zones creates the space for spreading and cooling of new lithosphere to occur. The result is a mosaic of nearly independent moving, growing, and cooling small, young, non-subducting plates heading toward individual retreating subduction zones. The plates are separated by spreading centers (ridges), triple junctions and transform faults, and thus the newly formed multi-slab subduction system operates as an embryonic plate-tectonic cell.

However, the researchers found that the subduction could only begin under certain conditions. The plume had to intrude into the old, cold lithosphere that would sink easily, and it had to be powerful enough to sufficiently weaken the crust above it to induce its collapse. In addition, the subduction needs water to lubricate the moving tectonic plates. But when these conditions are met, their numerical experiments demonstrated that if energetic mantle plumes with large temperature excess were feeding large plume heads, then the old, cold lithosphere would be weakened enough for subduction to be initiated.

Back to the Early Earth

Conventional uniformitarian geologists maintain that the earth’s mantle during the Archaean (2.5–4.0 billion years ago) was 100–300°C hotter than today’s mantle. They base this inference on the dominant presence of volcanic rocks called komatiites in sequences of volcanic rocks called greenstone belts. These volcanic rocks are primarily found in the Archaean basement rocks found only on the continents. Those komatiites erupted as lavas as hot as 1600°C, whereas today’s basalt lavas normally erupt at temperatures around 1200°C. A hotter mantle is certainly capable of producing a powerful plume, but the start of subduction and plate tectonics required an ocean floor crust at that time which was old, cold, negatively buoyant, and strong.

Interestingly, the Precambrian rock record contains apparent evidence of several episodes of very strong mantle activity, the largest of which preceded a hypothesized Archaean transition to the first episode of plate tectonics. Of course, such conjectures are based on assuming billions of years of slow geologic processes operating only at the behest of their own naturalistic forces. We reject such conjectures on the basis of God’s Word as our authority, because He has told us He initially created the earth instantly out of nothing only about 6,000 years ago, and then formed and filled it in readiness to be man’s home over the ensuing passage of only six literal, normal days.

What Happened During the Creation Week?

So what are we to make of this research and these observations of the rock record within the biblical view of earth history provided in the Creator’s eyewitness account in Genesis? Most creationist geologists place the beginning of the global Flood cataclysm in the rock record near the top of the so-called Precambrian, not far below the abrupt transition to sedimentary rock layers containing prolific fossils of solely marine creatures, nearly all shallow water ones. Below that pre-Flood/Flood boundary in the rock record, the rocks date back to the pre-Flood era and to the creation event about 1,650 years earlier.

There would also be common agreement that so-called Archaean rocks date back to the creation event. Even though many of such rocks look similar to rocks formed during the Flood, Archaean rocks would have been the result of God’s supernatural creative activity on Days One and Two of the Creation Week. The similarity is not a problem because it can be understood in the same way as the similarity between the wine Jesus created instantly from water at the marriage feast in Cana that looked the same as the wine consumed earlier by the guests, wine which had resulted by “normal” processes from human cultivation of grapes, etc. (John 2:1–11).

Then the hypothesized Archaean transition to the first episode of plate tectonics may possibly have resulted from God’s supernatural activities early on Day Three, when He raised rocks from under the globe-encircling waters of the first two days of creation to make the dry land (Genesis 1:9–10).3 Such earth movements at super-catastrophic rates may possibly have involved the first episode of catastrophic plate tectonics. The waters draining off the emerging land surface would likely have catastrophically eroded it and deposited the resulting sediments offshore.4 Then in the pre-Flood era that followed, there likely would have been a stable supercontinent for man to live on, because all the waters had been gathered into one place (Genesis 1:10), so all the land may have been also in one place. 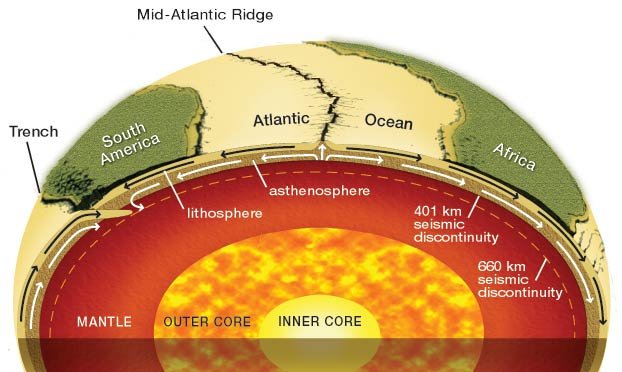 Cross-sectional view through the earth. The general principles of plate tectonics theory may be stated as follows: deformation occurs at the edges of the plates by three types of horizontal motion—extension (rifting or moving apart), transform faulting (horizontal shearing along a large fault line), and compression, mostly by subduction (one plate plunging beneath another).

What Happened to Initiate the Flood?

It is also near the top of the Precambrian at the presumed pre-Flood/Flood boundary that the “modern” cycle of plate tectonics began, which ended with today’s continuing slow plate movements. The Genesis account specifically states that the Flood was started by “all the fountains of the great deep” being broken up (Genesis 7:11). Many creation geologists have interpreted this as a description of the initiation of the catastrophic plate tectonics that drove the global cataclysmic Flood event.5 It is postulated that the pre-Flood ocean floor crust split open all around the globe as a result of large plumes of hot rock welling up inside the mantle, rifting the ocean floor, and producing new hot ocean floor lavas and supersonic steam jets. This rifting also cut across the pre-Flood supercontinent, ripping it apart into a few continental fragments as part of crustal plates, which started to be moved across the earth’s surface. At the same time the edges of the old, cold, pre-Flood ocean floor crust abutting the continental crust broke loose and, being negatively buoyant, started to subduct beneath the margins of the continental crust.

Thus this latest numerical modeling research by Gerya et al. is very helpful for many creation geologists. It confirms how they envisage the initiation of the catastrophic plate tectonics that drove the global cataclysmic Flood event. Strong, hot mantle plumes rising to the top of the mantle burst through the old, cold oceanic crust (and lithosphere) to set off rifting and subduction all around the globe. Nevertheless, Scripture makes it clear that no matter what the mechanisms were involved in the global cataclysmic Flood event, God was sovereignly in control, unleashing mind-boggling catastrophic forces under His command to destroy the earth and blot out man and beasts from the face of the earth because of pre-Flood humanity’s utter wickedness and rebellion against Him, the holy and just Creator of all (Genesis 6:6–7, 11–13).

Previous Article Do Deep-Sea “Purple Socks” Hold Early Evolutionary Secrets? Next Article The Gorilla-Human “Split”: Where Do Gorillas Hang on Our Family Tree?