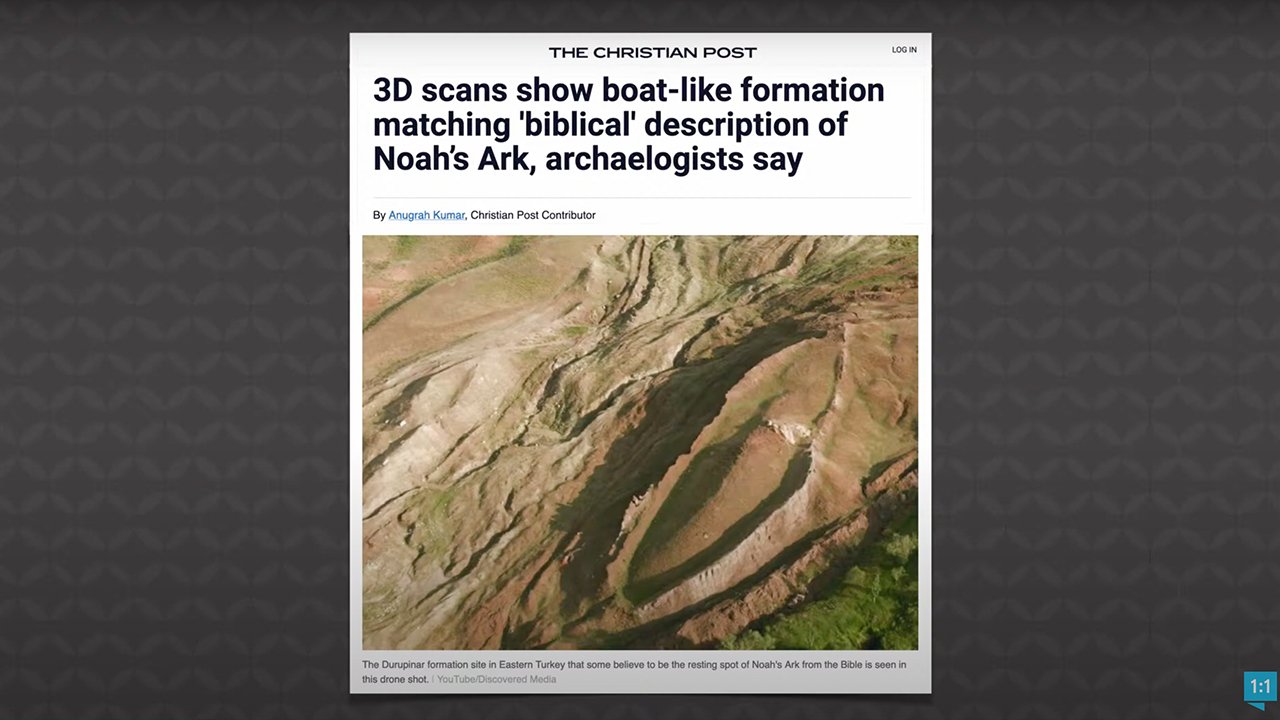 You may have seen exciting headlines like this one: “3D scans show boat-like formation matching 'biblical' description of Noah’s Ark, archaeologists say.” According to reports, researchers using ground-penetrating radar have discovered a boat-shaped formation matching the dimensions of the biblical ark, including “parallel lines and right angles,” on Mount Tendürek in Eastern Turkey. Could it be true—has Noah’s ark been found?

Well, this isn’t a new find—this is the Durupinar site we’ve written about many times before (for example here, here, and here). It was first postulated as an Ark site back in 1959 and has been disputed (and refuted) ever since, including by Christians and creationists who believe God’s Word and would certainly love to find the ark (although we don’t have to). But we don’t believe researchers have discovered Noah’s ark at Durupinar (or anywhere else) for a number of reasons. Geologist, and director of our research department, Dr. Andrew Snelling, explains:

We do not expect the Ark to have survived and been available to find after 4,350 years. With no mature trees available for Noah and his family to build shelters after they got off the Ark, there is every reason to expect they dismantled the Ark (which they didn’t need anymore) to salvage timber from it.

Besides, this claimed Ark site is in a valley and not on a mountain as described by the Genesis account. It is unclear exactly the identity and location of the “mountains of Ararat” [Genesis 8:4; notice the plural word “mountains”], but even this site sits on volcanic lava flows (under the mud flows), which like Mount Ararat itself is a post-Flood volcano that even recently erupted. The Ark landed on a mountain on Day 150 of the Flood, so if it landed on a volcano that was still erupting and erupted again later during the Flood, the survival of Noah and his cargo would be at risk.

These investigators can do all the geophysical imaging they like, but all geophysical imaging involves computer modeling of the raw data, the electrical and other signals the detectors record, and those models are subject to interpretation based on the bias of the interpreter. The reality is that these “investigators” will never be able to establish what is inside this “boat-shaped formation” until such time as they actually excavate the site by digging through it. They can theorize all they like about the unusual parallel linear and angular features shown up by the geophysical imaging, but until they actually dig into the site to expose those features for visual identification, their theorizing simply remains that. And we will continue to doubt their claims!

These claims regarding this site have been made for more than 25 years and have been refuted many times before. We don’t need to find the Ark to accept it as a historical reality. We already have the infallible testimony of the ever-present, all-knowing Creator in His Word. And even if the Ark were found, scoffers would still reject the evidence, dismissing it as a replica built by worshippers to a myth they believed in.

These claims regarding this site have been made for more than 25 years and have been refuted many times before. We don’t need to find the Ark to accept it as a historical reality.

So, has Noah’s ark been found? We would say no. And we don’t need to find the ark to demonstrate the Bible is true (though it certainly would be the find of the century!)—the Bible is testimony enough to the historicity of this event. And, as Dr. Snelling said, skeptics "would just explain away the evidence, as they do the mountains of evidence for a global flood. The unbelieving heart doesn’t want to believe, “even if someone should rise from the dead” (Luke 16:31).

That doesn’t mean apologetics and presenting evidence aren’t used by God to open hearts and minds to the gospel—we receive testimonies on a regular basis of how God is doing just that. But it does mean our hope shouldn’t be in “a silver bullet” that would convince massive numbers of skeptics or forever vindicate the Bible. Rather our hope should be in the power of the gospel (Romans 1:16), the absolute truth of eternal God’s Word (Psalm 119:89) and the promise that Christ will build his church and not even the gates of hell can stand against it (Matthew 16:18)!

This item was discussed yesterday on Answers News with cohosts Tim Chaffey and Roger Patterson. Answers News is our twice-weekly news program filmed here at the Creation Museum and broadcast on my Facebook page and the Answers in Genesis Facebook page. We also covered the following intriguing topics:

Watch the entire episode of Answers News for October 6, 2021.