Where Is Noah’s Ark?

There have been many claims over the years that explorers have found the remains of Noah’s Ark. While this great ship really did exist thousands of years ago, what can we say about it today? One challenge in finding the Ark is the enormous size of the area to search. While many people believe the Ark landed on present Mt. Ararat, the Bible actually states that it landed on the “mountains of Ararat” (Gen. 8:4). AiG’s geologist Dr. Andrew Snelling thinks it unlikely that the Ark landed on Mt. Ararat (in modern-day Turkey) because of the geologic nature of that mountain.

Dr. Snelling told me that Mt. Ararat was formed as a result of a volcano:

We can’t be sure of whether there was already a mountain there prior to the volcanic eruptions, but from all our knowledge of volcanoes and of the eruptions that have been witnessed, it would have to be concluded that it is likely there were no mountains or hills there previously.

Indications are that the lavas making up the Mt. Ararat volcano today are of considerable thickness, much higher and thicker than the Ark itself. This would mean that should the Ark have landed at the place currently known as Mt. Ararat, on Day 150 of the Flood (Gen. 7:24), it would eventually have been buried under thousands of feet of hot burning lavas. 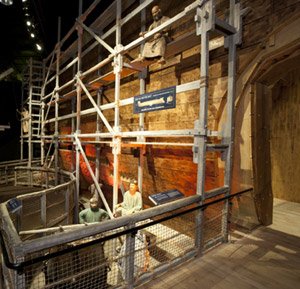 This large exhibit in the Creation Museum shows how Noah’s Ark could have been constructed.

Dr. Snelling also stated that much more geologic research still needs to be done in this area. Certainly, if the remains of Noah’s Ark were found, it would be the greatest archaeological discovery in history. A few months ago, a poll conducted by America’s CBS TV network and Vanity Fair magazine asked people which archaeological discovery they would want to see. The response: Noah’s Ark (43%), Atlantis (18%), Amelia Earhart’s plane (16%), Nixon’s lost tapes (13%), and Cleopatra’s barge (5%).1

Now, what if the remains of the Ark were found? Would it result in mass conversions? It would certainly spark tremendous interest and be headline news. But I believe we need to put all this in perspective, and I think it will be helpful to understand a conversation in Luke 16 about a rich man, Abraham, and Lazarus:

Then he [the rich man] said, “I beg you therefore, father [Abraham], that you would send him [Lazarus] to my father’s house, for I have five brothers, that he may testify to them, lest they also come to this place of torment.” Abraham said to him, “They have Moses and the prophets; let them hear them.” And he said, “No, father Abraham; but if one goes to them from the dead, they will repent.” But he said to him, “If they do not hear Moses and the prophets, neither will they be persuaded though one rise from the dead.” (Luke 16: 27–31)

The bolded words are a reminder that we, like the rich man’s brothers, have God’s Word! If people are not prepared to believe God’s Word (the Bible), they won’t be persuaded even if a dead person came back to warn them. In Matthew 28 we read that the chief priests had money given to the soldiers so they would report the body of Jesus was stolen instead. Jesus had obviously risen from the dead, and they refused to believe!

Even though finding Noah’s Ark would be another phenomenal confirmation of the truth of Scripture (and we would love to see that happen), we already have overwhelming confirmation of the reality of the Ark and a global Flood. That includes the massive fossil record in the ground, Flood accounts that abound in dozens of cultures around the world, and other evidences.

Noah’s Ark was a sign to the pre-Flood world that God judges sin—and that in His grace He provides a way of escape from that judgment. All through the Scriptures, God gave the Israelites sign after sign—and they still rejected His Word. The discovery of Noah’s Ark would be another sign to this world that God’s Word is true. But I believe we could also say something like this: “If they do not hear Moses and the prophets, neither will they be persuaded if Noah’s Ark is found.”