Natural Selection from an Evolutionist Perspective

National Geographic offers this definition of natural selection from an evolutionist perspective:

The process by which genetic traits are passed on to each successive generation. Over time, natural selection helps species become better adapted to their environment. Also known as “survival of the fittest,” natural selection is the driving force behind the process of evolution.1

Natural selection brings to mind TV nature shows of the lions overcoming the sickly zebra so that the genetic mutations it carried will be culled from the zebra herd. Or we might think of the fittest rabbit escaping the claws of the owl, and thus passing its stronger genes on to its offspring.

In his book On the Origin of Species by Means of Natural Selection,2 Charles Darwin popularized the idea of natural selection (a process that had been previously explained by a creationist3). Darwin observed that the finches on the Galápagos Islands had different sizes of beaks, with each beak shape uniquely suited to the food source. Darwin proposed that the finches had all descended from an original pair or flock, and that, through natural selection, the finches had adapted with different sizes of beaks to their diverse habitats.

Darwin applied those small-scale changes to the large-scale evolution of all life forms from a common ancestor. He credited natural selection as a force behind evolution. Given enough time, he believed a simple organism could change into a higher life form.

If it seems somewhat of a stretch to go from bird-beak variation to goo-to-you evolution, that’s because it is quite a stretch. After we ooh and aah about the bird-beak changes, we must concede that the finches are still reproducing finches, not a different type of creature. The same can be said for other icons of evolution, such as the peppered moth.

In the classic case of the peppered moth, biology textbooks report how increasing pollution made the light-colored moths less camouflaged on tree trunks and therefore easy targets for a bird snack. The dark-colored peppered moths were the “fittest” in this case. The natural selection we observe here led to a loss in variety as it worked to reduce the numbers of light-colored moths. While it was a change, it wasn’t an upward change with increasing genetic information that would be required for a change to a different kind of animal.

Showing a change within an animal kind as an example of natural selection and then saying this is proof of molecules-to-man evolution is a logical fallacy of equivocation. Equivocation is often called a “bait and switch” fallacy because the observable process of natural selection is switched in a “sleight of speech” for the unobserved process of particles-to-person evolution.

If we take a loose definition of evolution, meaning “change,” then yes, natural selection is evolution/change. But what is typically meant in this argument is that natural selection is molecules-to-man evolution. That is, by survival of the fittest, natural selection has the power to move a single-celled organism in a step-wise fashion to a higher life form, eventually to humans themselves. Is this scientifically possible, or is it a just-so story?

In Darwin’s time, genetics was not yet a field of science. It is evident today that natural selection can only result in changes with already existing traits in the gene pool. Natural selection may result in changes (and sometimes speciation) within a particular animal kind. But these changes often lead to a loss of genetic information. Natural selection certainly cannot add the new genetic information that would be required to change, say, a reptile into a bird. For example, the African wild dog and Arctic wolf are related but quite different from one another, and each is well suited to its unique environments. Many scientists (both evolutionist and creationist) would credit natural selection for the differences, saying the thin-haired, dog-like ancestors fared better in the warm African climate and the thick-haired, dog-like ancestors fared better in the cold, northern climate. Yet both the African wild dog and Arctic wolf are still dog-like creatures and will always produce more dog-like creatures. Similarly, natural selection may have played a role in the differences between polar bears and brown bears, but the two species still belong to the same bear kind. 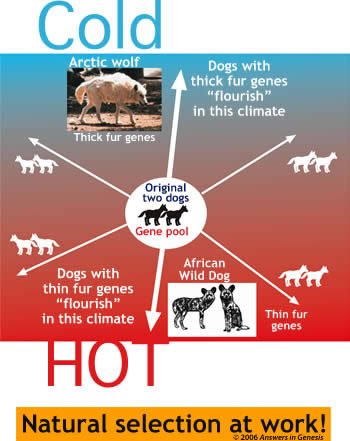 The term natural selection seems to give nature a superpower of selecting, as if nature is a picky coach at tryouts, selecting the players most suited for his team. But natural selection is actually a passive process with the means being death.

In reality, this doesn’t happen so neatly. Maybe the diseased zebra survives long enough to pass mutant genes on to its offspring; or the stronger rabbit just happens to be at the wrong place at the wrong time and gets picked off by the owl; or perhaps Darwin’s finches that had a survival advantage with larger beaks will face extinction when the environment changes.

After scientists observe which organisms are “fittest” (i.e., survived in greatest relative numbers), then they can begin to speculate on why. Was it camouflage, speed, intelligence, fecundity (having lots of oﬀspring easily), disease resistance, some combination or none of these, or just “blind luck”? Ecclesiastes 9:11 says, “The race is not to the swift, nor the battle to the strong [in our fallen world] . . . but time and chance happeneth to them all” (ASV).

Natural selection is a fact because it’s a tautology or truism, a form of circular reasoning. It is argued that the fittest are those that survive in greatest relative numbers and those that survive in the greatest relative numbers are defined as the fittest. That’s definitely true, but it’s really just an observation, not a profound theory, and begs the question of what makes some organisms fitter than others. . . .

Perhaps the most important role of natural selection in a fallen world (corrupted creation) is acting as a brake, slowing down the accumulation of harmful mutations, eliminating or reducing genetic decay by producing “unsurvival of the unfittest.”

All scientists agree that elimination of the unfit is a major consequence of natural selection in our present world, but a process that works at best to make tomorrow no worse than today is no process for producing the evolutionist’s dream of upward, onward progress. Eliminating defects to repair an old car may keep it running, but it will never turn a mini-van into a Formula 1 race car!4

Even if we give natural selection the benefit of the doubt and assume it is typically beneficial—still, no matter how fit the survivors of natural selection, there’s no genetic hocus pocus happening to transform a salamander into an elephant, or an ape-like creature into a human. Natural selection is not a genetic magician. It cannot lead to upward change (even if paired with mutations, which will be addressed in a future article in this series). Natural selection is not a creative process; it’s a change within the already existing gene pool. Rather than a directional, stair-step progression to different kinds, natural selection is more like a merry-go-round of variation as the scenery changes, but when the carousel stops, you’re still riding on the same kind of animal.

Natural Selection from a Creationist Perspective

A creationist does not start from the naturalistic worldview where everything has to be explained without God: we start with the Bible as the Word of God. God tells us from the very first verse that he is the Creator of all things (Genesis 1:1). Rather than taking billions of years, God created the heavens and earth in six days. Rather than starting with a single-celled organism that would evolve, God created complete plants and animals, “each according to its kind” (Genesis 1:11–12, 21, 24–25).

The biblical “kind” corresponds in general to the family level of classification. At each family level, God placed astounding variety in the genetic code so that each kind could produce a diversity of variants or species, but still within its own kind.

Before the Flood, God instructed Noah to take two of each kind of animal. The representative animals had the genetic potential to lead to the species we find today. After the animals exited the Ark, processes such as migration and natural selection helped them adapt to different habitats and form many new species. The God-given genetic variety enabled the animal kinds to fulfill God’s command of multiplying and filling the earth, from the Arctic tundra to the Sahara Desert.

So what is the biblical view of natural selection? Why would a good God allow so much bloodshed and death in his creation? On the sixth day of creation, we read that God gave plants as the food for man and animals (Genesis 1:29–30; contrast with Genesis 9:3), so death was not originally part of his “very good” creation (Genesis 1:31). But we read in Genesis 3 how Adam and Eve fell into sin, bringing suffering and death. Creation was cursed.

Does God turn a blind eye while natural selection runs its deadly course in the animal world? Certainly not. Jesus said that not even a little sparrow falls to the ground “apart from your Father” (Matthew 10:29). Our Creator is sovereign—he is in control, not only over spinning planets, but also over a sparrow’s life and death.

Any natural processes we observe, such as natural selection or the food chain—God oversees it all (Job 38:39–41). God’s sovereignty over the animal kingdom is not indifferent or harsh, but providential care (Psalm 147:9; Matthew 6:26). How much more is God’s providential care of people made in his image (Genesis 1:26)? Jesus said his followers need not fear, as “you are of more value than many sparrows” (Matthew 10:31).

You were made to glorify the one “in whose hand is your breath, and whose are all your ways” (Daniel 5:23). You cannot rebel against him and get away with it. Jesus said, “fear Him who can destroy both soul and body in hell” (Matthew 10:28).

Unlike the “survival of the fittest,” God does not save the “fittest” or self-righteous person, but rather the person who recognizes his own spiritual unfitness and calls out in faith for salvation in Jesus (Isaiah 57:15, 64:6; Ephesians 2:8–9).

God sent his own perfect Son to take on the punishment for sin at the Cross. The Resurrection proves Jesus conquered sin and death. Jesus is coming again, and his followers will live in the new world that he makes, free from natural selection.

[God] will wipe away every tear from their eyes, and death shall be no more, neither shall there be mourning, nor crying, nor pain anymore, for the former things have passed away. (Revelation 21:4)

Previous Article “It’s Here, so It Must Have Evolved.” Next Article “Common Design Means Common Ancestry”