The Fallacy of Equivocation

When debating on any topic, it is very important that we pay close attention to the meaning of words and how they are being used in the debate. Most words have more than one meaning, but only one of these meanings will properly fit the given context. When someone shifts from one meaning of a word to another within an argument, he or she has committed the fallacy of equivocation.

Here is a facetious example: “Doctors know a lot about medicine, and Dr. Lisle is a doctor. So, he must know a lot about medicine.” This short argument shifts from one meaning of the word doctor (medical doctor) to another (Ph.D.), making the argument fallacious. This use of equivocation is sometimes called a “bait and switch” fallacy because the listener is baited on one meaning of a word, and then the meaning is switched to draw a faulty conclusion.

Evolutionists often commit the fallacy of equivocation on the word evolution. This word has a number of meanings. Evolution can mean “change” in a general sense, but it can also refer to the idea that organisms share a common ancestor. Either meaning is perfectly legitimate, but the two meanings should not be conflated within an argument. Many evolutionists seem to think that by demonstrating evolution in the sense of “change,” that it proves evolution in the sense of “common descent.” 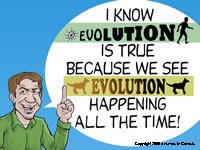 You might hear them say something like, “Creationists are wrong because we can see evolution happening all the time. Organisms are constantly changing and adapting to their environment.” But, of course, the fact that animals change does not demonstrate that they share a common ancestor.

I cannot overstate how common this fallacy is in evolutionary arguments. Bacteria becoming resistant to antibiotics, speciation events, changes in the size and shape of finch beaks, the development of new breeds of dog, and changes in allele frequency are all examples of change, but none of them demonstrate that the basic kinds of organisms share a common ancestor. When you hear evolutionists cite these as examples of “evolution in action,” you need to politely point out that they have committed the fallacy of equivocation.

You might notice that at Answers in Genesis, we often use phrases like “particles-to-people evolution.” This may seem overly cumbersome, but we do this precisely to avoid equivocation.

Another word on which people sometimes equivocate is the word science. Science commonly refers to the procedures by which we explore the consistent and predictable behavior of the universe today—the scientific method. This is operational science. But science can also refer to a body of knowledge (e.g., the science of genetics). Furthermore, science can also refer to models regarding past events; this is origins science. Or it can refer to a specific model. When any of these meanings are switched within an argument, it is an instance of the fallacy of equivocation.