Species and Kinds and the Ark

A reader writes, “If evolution is wrong, then that means that god created every single species that now exits. Given this, how did all these species fit on Noah's single ark?” Paul Taylor responds.

If evolution is wrong, then that means that god created every single species that now exits. Given this, how did all these species fit on Noah's single ark? How big was this ark? What if one individual of a pair died, then the species would go extinct right?

Thank you for sending this short feedback. It enables me once more to emphasize some very basic misconceptions about both the creationist position and what the Bible actually says.

If evolution is wrong, then that means that god created every single species that now exits.

There is frequently an assumption among those who wish to ridicule creationists that if they give us an argument with the words “if” and “then,” then they have proved their point. Unfortunately, this would only work if the second clause really were an automatic corollary of the first.

The scholarship conducted and presented at AiG, as well as related articles, has helped me hang on to my faith and become bold in my assertions that God's word is in fact truth. When I started attending college, I was a person of firm faith in the word of God, but was not prepared for the incredible deluge of information that directly challenged my beliefs. From evolution to relativism (a form of perpetual doubt) to a general rejection of the Bible as a reliable source of truth, I was almost converted from Christianity to Humanism, a crisis of faith if you will. After reading through the articles in AiG, though, I am able to make a stand for my faith. I seek to know exactly what I believe and present a reasonable defense for why I believe it. I can readily attest that Humanism is established in American academia and seeks to convert others, especially Christians, though none dare call it conversion.

Natural selection, as has been stated, is operational science. It is observed. Therefore it would be erroneous to claim that God had created every single species in exactly the form we now see them. Most creationists (including those at AiG) make no such claim. This is stated in an article on our website along with many other Arguments creationists should NOT use.

The Bible does not say that God created every single species. Instead, it says that God created various plants and animals “after their kind” (Genesis 1) . This biblical kind is far broader than the concept of species. For example, horses, donkeys, zebras and ponies are probably all from one created kind. The biblical kind is therefore approximately similar to the taxonomic classifications of “genus” or “family.” Lest the skeptic think that this is just playing with words, let’s use some simple science. The formation of new species always comes about by a rearrangement—or often a loss—of genetic information. In order for a creature to develop from one kind to another, it would be necessary for there to be an increase in new genetic information. Such increases in information are not observed, and, in fact, Dr. Werner Gitt’s work on information science would suggest that these theoretical increases in new information are not possible (see In the Beginning Was Information).

Given this, how did all these species fit on Noah's single ark?

The above discussion shows that God did not have to fit every species on the Ark. He had to fit two of every kind. Woodmorappe has suggested about 8,000 kinds—including extinct kinds—in his very detailed work, Noah’s Ark: A Feasibility Study. Therefore the Ark would have contained about 16,000 animals (there are not many clean animals, of which Noah required seven pairs).

How big was this ark?

Apparently you have not checked for this answer on our website. There are several places where the size of the Ark has been illustrated using the measurements given in the Bible. The Ark was truly enormous. 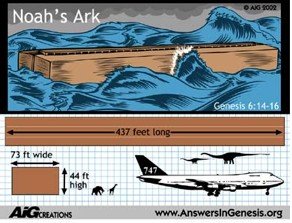 Woodmorappe shows that the average size of the animals on the Ark could have been that of a large sheep or bison. Many animals, including dinosaurs, were rat-sized. Even considering the very large sauropods, there would still have been room, especially considering that the oldest and largest animals would likely not have been chosen for the Ark—smaller, younger, more fertile animals would have been preferred. It is clear from the picture that there was plenty of room for 16,000 sheep!

What if one individual of a pair died, then the species would go extinct right?

With this question, you are asking whether God, having miraculously brought the animals to the Ark, and having miraculously closed the door from the outside, accidentally let one of them die before they could breed. Having said that, it is clear that there have been many extinction events after the Flood, and these may have occurred because there was insufficient breeding stock even after a few generations.

It is our normal practice not to answer feedbacks where the answers could easily have been gleaned from articles already on our website. However, we have answered this one because of the opportunity it provided to highlight baraminology and the great detail of creationist research on Noah’s Ark feasibility provided by Woodmorrappe (as mentioned earlier), as well as to expose the paucity and puerility of many of the arguments thrown at us.

Previous Article “God Shut My Mouth” Next Article Is This Answer in Genesis?