Evolution of live-bearing lizards from lizards makes the news.

Evolutionists generally view “live-bearing” as an evolutionary advance over more primitive “egg-laying.” Most lizards and snakes are egg-layers, but many species bear live young. Evolutionists estimate that this ability—ovoviviparity—evolved over 100 different times in various lizard and snake lineages but debate the conditions that favored its emergence. Because there are so many such ovoviviparous animals, many evolutionists consider them a source of information about the presumed evolution of live-birth (viviparity) in mammalian evolutionary history.

“Evolution of viviparity: a phylogenetic test of the cold-climate hypothesis in phrynosomatid lizards,” published in the journal Evolution and presented by graduate student Shea Lambert at the June meeting of Evolution 2013,1 explains the supposed scientific relevance of lizard research to molecules-to-man evolution. The authors write:

[D]etermining the selective forces that led to the evolution of viviparity is difficult or impossible in mammals, in which viviparity seems to have evolved only once among extant lineages and >100 million years ago. The single origin makes statistical analysis difficult, whereas that ancient timing makes it problematic to infer the ecological conditions that were associated with this transition.2

Lambert’s study deals not with mammals, however, but exclusively with lizards. After correlating climate, geography, and lizard reproductive styles, he describes the conditions that make ovoviviparity advantageous and the geographical influences on lizard speciation. But are these answers, which involve only lizards, ones we can trust?

Unlike live-bearing viviparous mammals, whose embryos never reside inside an egg, live-bearing reptiles are ovoviviparous. In other words, their embryos initially develop inside eggs but complete their maturation inside the mother’s body before entering the outside world as live-born young. Thus, all the lizards in question enclose their embryos inside eggs at some point; the key difference between egg-layers and live-bearers is the location at which the embryos mature, and in some cases how much nourishment the embryo obtains directly from the mother’s body.

It has generally been assumed that the ability to mature embryos inside the mother’s body is an advantageous reproductive strategy for cold climates. “Retention of eggs in utero and behavioral thermoregulation by pregnant females allows for faster development and avoids lethally cold temperatures for developing embryos,”3 according to this “cold-climate hypothesis.” In fact, studies have shown that temperatures inside a pregnant lizard’s body are warmer than ground temperatures.4 However, the fact that many live-bearing lizards are native to hot tropical lowlands—and the additional fact that many egg-laying lizards are native to cold mountainous regions—cast some doubt on this hypothesis.5 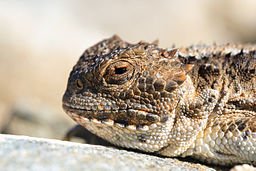 Phrynosoma hernandesi, the short-horned lizard, is one of the six species of horned lizards (Phrynosoma) to give birth to live young. Like other reptiles that do so, they actually have eggs which hatch inside their bodies. This process is called ovoviviparity, in contrast to mammalian live birth in which no actual egg-enclosed-embryo is involved. Image by Calibas, via Wikimedia Commons.

This crevice spiny lizard (Sceloporus poinsettii) is one of the ovovivparous species of spiny lizards. Along with the horned lizards, spiny lizards are members of the very diverse Phrynosomatidae family. Image Tim Vickers, via Wikipedia Commons.

To unravel this living lizard mystery, Lambert compared the habitats and reproductive habits of 117 species of the Phrynosomatidae family of lizards and correlated that data with what is believed about their evolutionary relationships. This family includes lizards native to cold Canadian climes, the western deserts of North America, and tropical Central America. The latitude, elevation, and typical maximum temperatures in each region were all factors in the analysis as Lambert tried to determine what ecological niches nurtured the evolution of ovoviviparous lizards. (Lambert and coauthor Dr. John Wiens chose the highest temperature rather than the lowest because these lizards typically reproduce in summer.)6

Phrynosomatids are a very diverse group that includes spiny lizards and horned lizards. Spiny lizards (genus Sceleporus) and horned lizards (genus Phrynosoma) include both live-bearing and egg-laying species. But Phrynosomatidae also includes seven other lizard genera that are strict egg-layers. The most commonly accepted current view of lizard lineage suggests that ovoviviparity had to evolve six different times among phrynosomatids. Lambert reports that his findings support the “cold hypothesis” and suggests past cross-breeding patterns that might have resulted in the somewhat paradoxical lizard demographics we see today.

The 117 species Lambert studied included over 40 live-bearing species. Many were spiny lizards (Sceleporus). Horned lizards are of the genus Phrynosoma, popularly known as “horned toads”—a crummy nickname because they are not and never have been toads. Six species of the fifteen North American horned lizard species bear live young. Ovoviviparous species of horned lizards include the short-horned lizard (Phrynosoma hernandesi)—Wyoming’s state reptile—which ranges from high elevations in Alberta, Canada, all the way into Mexico.7 Horned lizards eat live ants and are perhaps best known for the ability of some species to squirt nasty-tasting blood from the corners of their eyes into the mouths of attacking predators.

While many ovoviviparous lizards inhabit cold mountainous tropical regions, two species of live-bearers in Lambert’s sample are native to  tropical lowlands. However, based on the phylogenetic tree depicting the suggested relationships between species, Lambert suspects the live-bearing lizards at lower elevations—and even those that now live farther north in temperate regions—descended from these cold-adapted tropical lizards. “Viviparity is favored in the tropics,” he says.

Adding to the Facts

While the likelihood of shared ancestry between the various lizards is based on genetic similarities, that information is calibrated using the unverifiable assumptions inherent in molecular clock dating. Thus, the ancestral lizards are assigned their positions on the lizard family tree based on how many “millions of years before present” these assumptions indicate they diverged. Furthermore, conclusions about the conditions under which each species, with its oviparous or ovoviviparous nature, is supposed to have evolved are based on beliefs about the environmental conditions millions of years ago. In each case, information about the species living in various habitats at present is extrapolated backward into the unobservable past in order to draw conclusions about the conditions that selectively favored shifts between egg-laying and live-bearing in lizards.

The adaptive advantages of ovoviviparity in lizards have yet to be fully worked out, but this study’s contribution consists only of its database cataloging climate and mode of reproduction. The idea that cold climates offer the selective pressure that favors the survival and reproductive success of ovoviviparous species intuitively makes sense. However, lowland tropical live-bearers and cold-dwelling egg-layers still cast a wrench in this idea. While it may be the case that lowland tropical live-bearers descended from tropical mountainous varieties, as Lambert concludes, this study cannot actually confirm. Why? Because Lambert’s analysis is heavily based on unverifiable assumptions about climates and lizard lineages “millions of years” ago.

The cold-climate hypothesis is flawed because it is based on unverifiable assumptions about the past.

Furthermore, no molecules-to-man evolution is supported by this study. All the animals are lizards of the same family, quite probably even of the same created kind. A lizard with the genetic potential for either egg-laying or live-bearing would be equipped to adapt and thrive in a variety of environments. Thus what we see here is an illustration of the variability available within each created kind of animal that God made about 6,000 years ago. Experimental observation shows that animals vary and reproduce within their created kinds, just as the Bible records God created them to do, and this variability has made it possible for animals to adapt to many ecological niches.

Previous Article Cholera Clues Uncovered: Did Cholera Exert “Evolutionary Pressure” on People? Next Article How Did Birds Get To Be So Smart: Are They “Feathered Apes”?