Cholera—most prevalent in areas where water or food is contaminated—causes severe diarrhea that can kill within hours. There have been seven pandemics in the past two centuries, but the disease has a long history. It is even described in ancient Sanskrit medical texts. Still highly prevalent in the Ganges River Delta, researchers suspect the long presence of cholera in the area has shaped the genetic makeup of the people there. Genomic analysis of the indigenous population does not reveal that people are evolving—as some headlines have suggested. By pinpointing genes that occur in sufficiently high frequency to suggest they have been concentrated in the population over a number of generations, however, this analysis did find important clues to help understand this ancient disease. As a journalist for the Broad Institute of Harvard and MIT aptly writes, “Evidence of the battle against this disease has been recorded not only in medical texts, but also in the ‘text’ of human genomes.”

Cholera has historically killed over half its victims, and it still afflicts 3–5 million people annually. Victims of this bacterial disease suffer severe diarrhea and dehydration, often dying of the resulting electrolyte imbalances and shock. If treated aggressively with fairly simple medical intervention, most people today can survive. But left untreated, 25–50% of cholera victims still die.1 And because cholera most often occurs in developing countries with limited access to care, the overall worldwide mortality rate remains about 1.3%—meaning over 100,000 people still die from this menace every year. 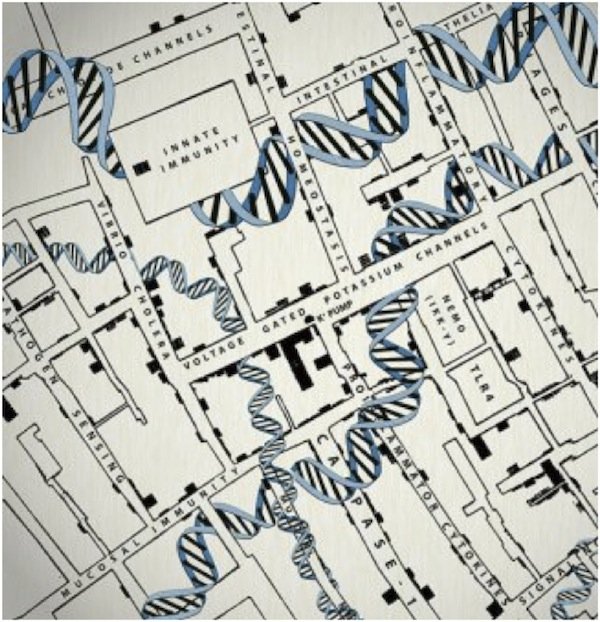 This “map”—drawn in tribute to physician John Snow who mapped out the clusters of cholera outbreaks in the London epidemic of 1854—is a reminder that many cellular processes and genetically modulated immune functions interact to influence susceptibility to this ancient and deadly disease. Image by Sigrid Knemeyer, via www.broadinstitute.org

Researchers have long suspected that there is a heritable component to cholera susceptibility. Close relatives of cholera patients have three times the chance of catching the disease.2 And for reasons only now beginning to be understood, people with blood type O are at an increased risk for severe cholera. Because the Ganges River Delta, where cholera has an ancient history, has the world’s lowest prevalence of that blood type, researchers set out to see whether cholera had exerted “strong evolutionary pressure”3 on the population of Bangladesh.

When people are subjected to the “selective pressure” of a deadly disease that for generations diminished the survival and reproductive success of those most vulnerable, any inheritable traits that enhance survival likely become concentrated in the population. “When a disease has been in a population for thousands of years, it leaves behind a very powerful signal in the genome that tells us where adaptive traits may have emerged,” explains Harvard researcher Elinor Karlsson. “When we’re looking for signals of natural selection, we’re looking for something that was imposing selective pressure on a population long ago.”

By studying the “text” of the human genome long exposed to cholera, researchers have learned more about cholera’s effect on its victims as well as factors that make some people better able to resist the infection. “Our goal is to better understand the interaction between the human immune system and the organism that causes cholera,” according to Massachusetts General’s Regina LaRocque. “These insights could teach us a lot of important lessons about how to develop better vaccines, and maybe even better therapies, for cholera.”

Cholera is caused by toxin-producing strains of the bacteria Vibrio cholerae. Not all V. cholerae serotypes cause disease. Those few strains of V.cholerae that do cause deadly diarrhea epidemics possess toxin-producing genes. Bacteria typically pass genetic information between themselves through a process known as horizontal gene transfer. Those bacterial genes are typically ferried by viruses called phages. Vibrio cholerae bacteria, including the many non-pathogenic varieties, live in brackish or marine water, coexisting with the plankton and even the shellfish there. Those containing the phage-carried toxin-producing gene, once they infect people, quickly become widespread in the environment if the bacteria-laden diarrhea contaminates drinking water sources.

The toxin produced by pathogenic cholera bacteria binds to cells lining the small intestine. The toxin disrupts the cellular processes that regulate the amount of water passing through the intestinal walls, causing an outpouring of fluid into the intestines and thus a dangerous diarrhea. People with blood types other than O have protein markers on the surfaces of many cells, including those in the small intestine’s lining. Medical researchers elsewhere recently learned that those protein markers chemically react with the toxin, possibly diminishing its effects and explaining the relative protection that blood type A, B, and AB people have against severe disease.4

Most microbes are still harmless, having been created as part of the “very good” world that God created in the beginning.

The fact that only a few strains of Vibrio cholerea are dangerous illustrates the fact that most microbes are still harmless, having been created as part of the “very good” (Genesis 1:31) world that God created in the beginning. Microbes that are disease-causing (pathogenic) have become so in this sin-cursed world through mechanisms such as displacement from their proper environment (such as Dr. Joseph Francis5 discusses in “Proceedings of the Microbe Forum, June 2007”) or mutations and genetic shuffling of their genetic material that in no case involve the evolution of new genetic information producing the types of change necessary for molecules-to-man evolution. Despite many variations, bacteria remain bacteria, just as people remain people.

“Again, natural selection is not equivalent to molecules-to-man evolution,” explains Answers in Genesis molecular geneticist Dr. Georgia Purdom. “Natural selection can only select from the variety already present in the genome, such as the different blood types. It does not result in the formation of novel information to combat cholera but rather the selection of pre-existing genetic information.”

To ferret out the clues buried in Bangladeshi genomes, a multinational team of researchers from Harvard University, Massachusetts General Hospital, and the International Centre for Diarrhoeal Disease Research in Dhaka, Bangladesh, sequenced the genomes of hundreds of Bangladeshis of Bengali origin. They compared their genomes to those in general databases. They also compared the genomes of cholera victims to those of exposed family members, both infected and uninfected. The team looked for patterns in the similarities and differences of the genomes.

This technique enabled the team to pinpoint the forms of several genes common in cholera-resistant people. One is involved in maintenance of the small intestine’s lining. Another modulates the body’s inflammatory response to invading microbes; in fact, a gene responsible for production of the inflammation-modulating protein that is attacked by cholera toxin differs between the cholera-susceptible and cholera-immune people tested. Another important gene affects the function of the potassium channels in cell membranes. “At first, this category of potassium channel genes confused us,” Karlsson says. “But it turns out that these genes are part of a set that is expressed in the lining of the intestine and control water loss. That’s exactly the kind of gene you would expect to be under selection if you are selecting against cholera.”

Hope via Experimental, not Evolutionary, Science

This information about the way cholera bacteria and their toxin interact with the body’s innate immune system will hopefully help researchers to develop effective vaccines that offer long-term immunity. “The first stage is for us to figure out the biology governing disease response. This gives us a place to start looking,” explains Karlsson.

“Understanding the basic biology of a disease is fundamental to making clinically relevant advances in treatment. Our laboratory is now working on further studies of the innate immune response to cholera, and we believe this work will be highly relevant to developing improved vaccines,” LaRocque adds. “Our findings are just a first step, but they demonstrate how combining ancient history with the current impact of an infectious disease can be a powerful way of identifying human genes that are important to disease outcome.”

This research illustrates the way natural selection can act to shape a population of people to become more generally resistant to a disease. It also shows, as Dr. LaRocque says, the efficacy of genomic analysis to uncover the pathogenesis of complex disease processes where that selective process has taken place over many generations. Yet nothing in this work demonstrates a need for medical researchers to accept molecules-to-man evolution in order to address these problems. The work represents a powerful application of experimental science, operating on observable data in the present to see the long-term effects of a disease process.