When the king cobra is scared or excited, it spreads the loose skin on its neck into the shape of a “hood.” 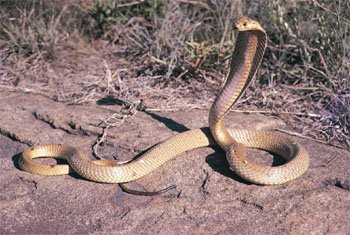 When the king cobra is scared or excited, it spreads the loose skin on its neck into the shape of a “hood.” There are false eye spots on the hood, which probably serve to fool and/or scare potential predators. The female can keep the sperm of her mate for years, using it to impregnate herself several times. This design ensures that these animals can reproduce even if adult males are sparse. Right after the young hatch, the female king cobra abandons them.