Where Did Morality Come From?

Never take your theology from a chimp.

Prominent primatologist Frans de Waal of the Yerkes Primate Center has, on the basis of his observations of primates, shared with the world his answer to the question, “Where did morality come from?” De Waal is an atheist but doesn’t mind it if other people cling to religious ideas because he believes religious ritual strengthens community ties. His book, The Bonobo and the Atheist, asserts that morality evolved as humans evolved. He further holds that humans eventually invented religion in order to codify a blueprint for moral behavior.

De Waal, having observed chimps and bonobos for years, says that they display empathy, fairness, altruism, grief, and guilt. De Waal writes, “Some say animals are what they are, whereas our own species follows ideals, but this is easily proven wrong. Not because we don't have ideals, but because other species have them too.” Thus in the usual approach taken by evolutionists in explaining biological similarities, common designs are claimed as evidence for evolution rather than for a common Designer. Thus, de Waal believes that apes possess the “basic building blocks” for morality, those “seeds of morality” that flowered in humans evolving from ape-like ancestors. 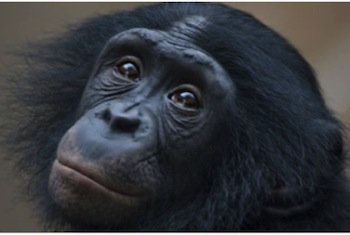 This bonobo, while not a moral agent, according to atheist primatologist Frans de Waal, possesses the seeds of morality that in our ancestors evolved to create a moral sense in humans. Image by ABC News, via Yahoo! News

De Waal does not claim that chimps are actually moral, as they are often extremely violent with each other and with humans. They “are ready to kill their rivals.” And “they sometimes kill humans, or bite off their face.” Therefore he is “reluctant to call a chimpanzee a ‘moral being.’” He seems, on the other hand, to rather admire the bonobo “morality” that frequently turns warlike posturing into an orgiastic party.

Nevertheless, he writes, “There is little evidence that other animals judge the appropriateness of actions that do not directly affect themselves. In their behavior, we recognize the same values we pursue ourselves. I take these hints of community concern as a sign that the building blocks of morality are older than humanity, and we don't need God to explain how we got to where we are today.” Note here that de Waal is considering human beings as animals too, just the sentient sort that can judge the appropriateness of what they do. This error—the view that humans are merely highly evolved animals—is the root of de Waal’s erroneous position.

Evolutionists generally believe that the fact that we exist is self-evident proof that we evolved from simple ancestors through a long process of molecules-to-man evolution.

Evolutionists generally believe that the fact that we exist is self-evident proof that we evolved from simple ancestors through a long process of molecules-to-man evolution. Likewise, the fact that humans have a sense of moral judgment and standards of moral behavior is taken as prima facie evidence that such morality is also a product of evolution. The question for the evolutionist is not “whether” evolution occurred but to trace its steps. Thus, as an atheist and an evolutionist, de Waal is musing about which came first, morality or belief in God. But he never considers the possibility that an actual Creator created morality and life, and all that is.

Because apes sometimes exhibit behavior we would interpret as guilt or shame, de Waal concludes that human morality springs from within and that somewhere along our evolutionary path we evolved a religious tendency in order to effectively apply that moral sense to regulate society. De Waal claims, “The moral law is not imposed from above or derived from well-reasoned principles; rather it arises from ingrained values that have been there since the beginning of time.”

Well, those “ingrained values” have been present in humans since God created our first parents about 6,000 years ago, but not because morality evolved.

Well, those “ingrained values” have been present in humans since God created our first parents about 6,000 years ago, but not because morality evolved. On the contrary, God created Adam and Eve in His own image and therefore with both an understanding of what was good and the choice to obey their Creator or to rebel against Him. Humans have not lost that sense of right and wrong, and we usually call that sense a conscience. Romans 2 explains how the moral standards people tend to impose on others proves they have a concept of right and wrong for which they are responsible, and that moral standard comes from the law of God expressed in the Ten Commandments in Exodus 20 and written on every human heart (Romans 2:14–16). But our propensity to ignore our conscience and sin leaves our moral sense—our conscience—marred, sometimes even seared (1 Timothy 4:2). Romans 1:18–28 indicates how the process of sinful rebellion hardens people’s hearts against godly morality.

Our sinful natures and our marred perception of right and wrong make our conscience an imperfect guide to morality. Therefore, we need the Word of God to truly know God’s authoritative standard by which each of our consciences is judged. As our Creator, God alone has that moral authority.

Humans have a great tendency to anthropomorphize animal behavior, interpreting animal actions in accord with our human thoughts. But animals are not human, as de Waal acknowledges. They do not actually abstractly judge the appropriateness of their actions. If the nature of the animals or the conditioning imposed by interaction with humans or animals produces behaviors we can label in human terms, we should recall that the abstract interpretations are our own and prove nothing about the moral status of the animals. Neither do such moral-mimicking animal behaviors prove anything about our moral origins. If we want to know why we have a conscience, a moral sense, then we only have to look at the eyewitness account of our origins provided by our Creator. And if we want to know whether there is a universal standard of morality, we should understand that the Creator of all people provided a single standard authoritative yardstick of morality in the Bible (Micah 6:8). Since we all—everyone of us—fall short of that perfect moral standard God demands, God has graciously made forgiveness for our sin available through the sacrifice of Jesus Christ.

Previous Article News to Note, April 6, 2013 Next Article Tinkering With the Molecular Clock