Are “Adult Magazines” Immoral? Only 22% of Britons Say “Yes” 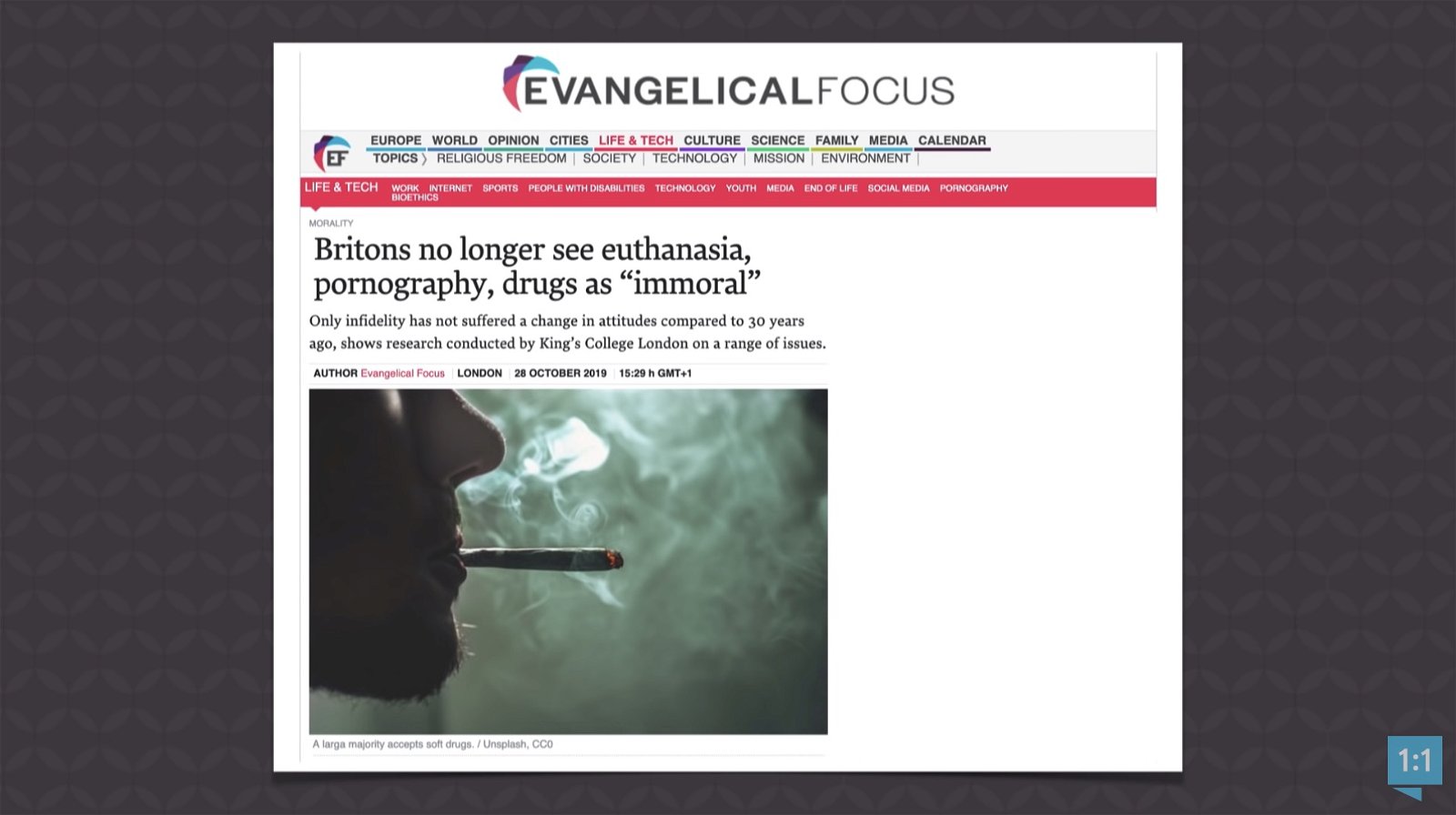 Abortion, pornography, and taking drugs—are these things immoral? Well, that depends on your foundation for morality. In much of the West, the foundation for morality is now predominantly subjective human opinion, so, as time passes, attitudes and beliefs on various moral issues change. With no moral absolutes, everyone does what’s right in their own eyes (Judges 21:25). Ultimately anything goes. And that’s what a new study out of the United Kingdom clearly showed.

This study from King’s College London compared figures from 1989 with polls taken this year to see how Britons’ views on various issues have shifted. And, as you might expect, it’s a downward trend. The outlier of them all, by the way, was infidelity. In 1989, 49% of people viewed unfaithfulness as morally wrong, but now 55% do. Here’s more on what the study found:

The Director of the Policy Institute for King’s College London explains these changes by saying, “On all sorts of issues, from . . .  nudity and violence on TV, to drug use and abortion, we are much more relaxed as a nation.” But is Britain more relaxed, or more desensitized to sin and more steeped in a secular worldview—one that has humanism (i.e., man is his own god) at its heart?

Generations have been raised in a government education system in the UK that teaches atheism, naturalism, and humanism. Church attendance rates since WWII have fallen dramatically, and the number of Christians in Britain is very low. (I have visited the UK many times and have seen firsthand the spiritual darkness there.). It’s no wonder people have given up biblical ethics! Without the absolute foundation of God and his Word, “anything goes,” and the ethic essentially becomes, “if it makes you happy, do it” and “let everyone do what they want—don’t judge.” Sadly, the USA is well on the way to becoming like the UK if the trends continue.

Morality comes from our Creator, who has given us his Word.

How is morality determined? Morality comes from our Creator, who has given us his Word. The Bible tells us what is right and wrong and gives us an absolute standard upon which to base our thinking. And someday, each individual will be judged—not according to our arbitrary standard, but according to God’s perfect standard. We’ve all broken God’s standard, “for all have sinned and fall short of the glory of God” (Romans 3:23), and therefore all stand guilty before God, deserving death (Romans 5:12).

But we don’t have to face God’s wrath for our sin! Jesus stepped into history, lived a perfect life, obeyed God completely and kept his perfect standard, died in our place, and took our sin upon himself (2 Corinthians 5:21). He rose from the grave, conquering sin and death, and now offers the free gift of eternal life to all who will repent and believe (Romans 10:9). We can be forgiven and receive eternal life if we believe the gospel! What a wonderful promise for every sinner!

This UK study was discussed Monday on Answers News with cohosts Dr. Gabriela Haynes, Avery Foley, and Bodie Hodge. Answers News is our weekly news program filmed live before a studio audience here at the Creation Museum and broadcast on my Facebook page and the Answers in Genesis Facebook page. We also covered the following topics:

Watch the entire episode of Answers News for November 4, 2019.