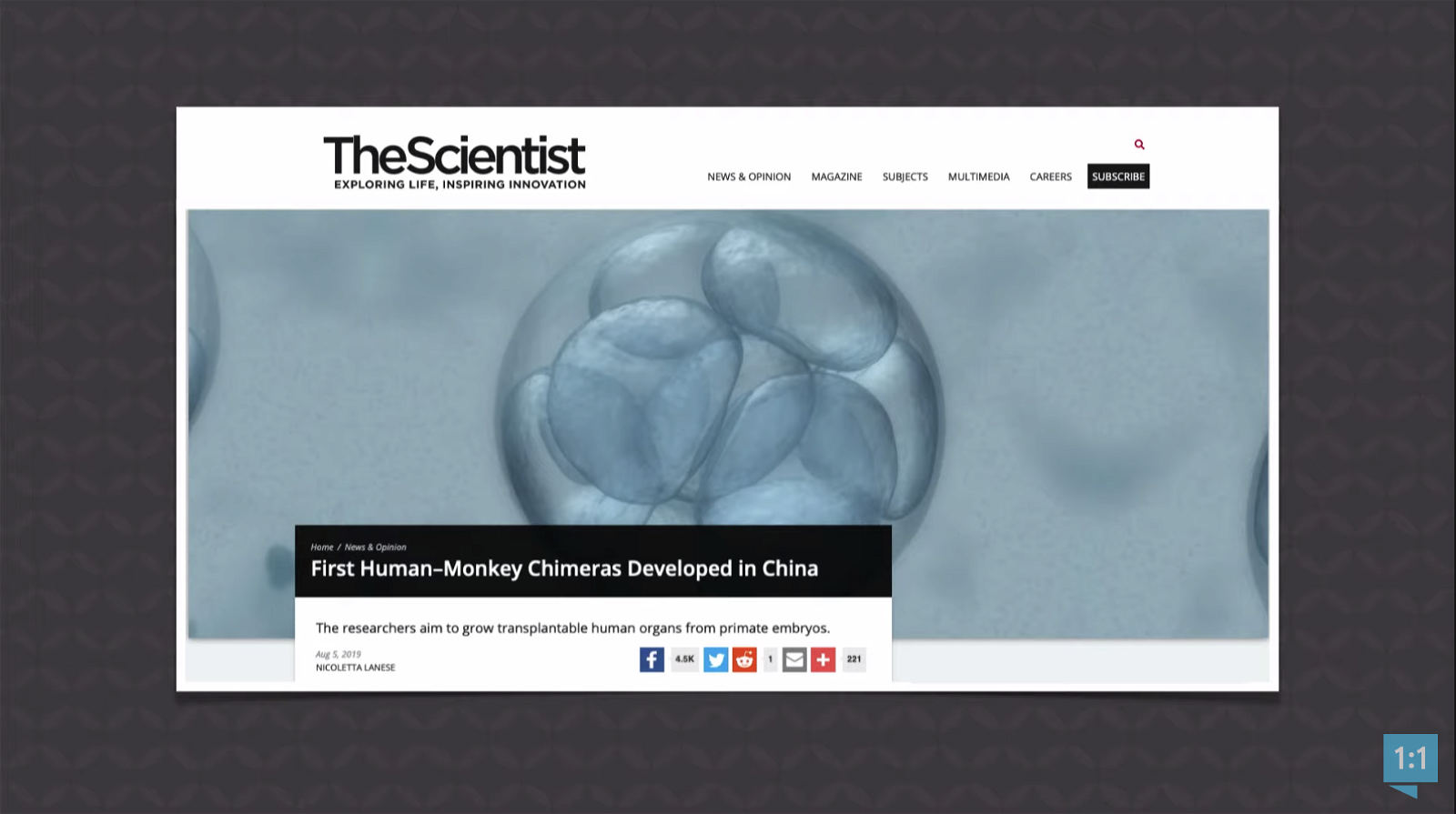 Headlines around the world announced that an international team of scientists working in China had created human-monkey chimeras. These “chimeras,” grown as embryos, have both human and monkey cells, and the goal is to grow organs able to be transplanted into humans waiting for an organ donor. This kind of research shows a complete and utter disregard for human life on a number of levels and crosses lines I don’t think should be crossed.

Dr. Georgia Purdom, a molecular geneticist here at Answers in Genesis, sent me her thoughts on this troubling news item:

When I first saw the news of human-monkey chimeras, I thought of Paul’s words in 1 Corinthians 10:23. Just because something is lawful, doesn’t make it the right thing to do. The researchers have good intentions in wanting to grow organs in monkeys that could be used for transplant purposes, saving many human lives. However, there appears to be no way to control where the human cells* migrate and what organs they are ultimately incorporated into. If they become incorporated into the brain, this raises serious ethical issues. Could these chimeras develop a human consciousness? It would seem an unwise chance to take.

Those commenting on the research think it’s “unclear” if a human-monkey chimera will fully develop to the point where the organs could be useful for transplant. Their reasoning? The evolutionary distance of “30–40 million years” since humans and monkeys last shared a common ancestor may be too great. From a biblical worldview, our reasoning for the chimeras not developing is very different. God created animals according to their kind, including several different monkey kinds, but man was made separate and different because man was made in the image of God and given dominion over the animals (Genesis 1:26–28). Monkeys and humans are not the same kind; therefore, a fully developed chimera seems highly unlikely.

Just because the end goal is good (growing organs to transplant for needy individuals) does not make the means justifiable.

Because many—if not most—scientists refuse to recognize that humans are uniquely made in the image of God (Genesis 1:27), and are not animals, they continue to cross and blur ethical lines. But the ends don’t justify the means. Just because the end goal is good (growing organs to transplant for needy individuals) does not make the means justifiable. We need to have an ethic in scientific studies that recognizes the inherent value of human life, including human life that is in the earliest stage of development. In other words, we need to have a truly Christian worldview when examining such issues, based on God’s Word!

This item was discussed Monday on Answers News with cohosts Avery Foley, Dr. Gabriela Haynes, and Bryan Osborne. Answers News is our weekly news program filmed live before a studio audience here at the Creation Museum and broadcast on my Facebook page and the Answers in Genesis Facebook page. We also covered the following topics:

Watch the entire episode of Answers News for August 12, 2019.

* Currently available literature is not clear on the source of the cells, but it does not appear to be embryonic stem cells.

Previous Article Don’t Miss Our Fall Fossil Hunt, September 7 Next Article How Can We Have the Courage to Share the Gospel with Others?