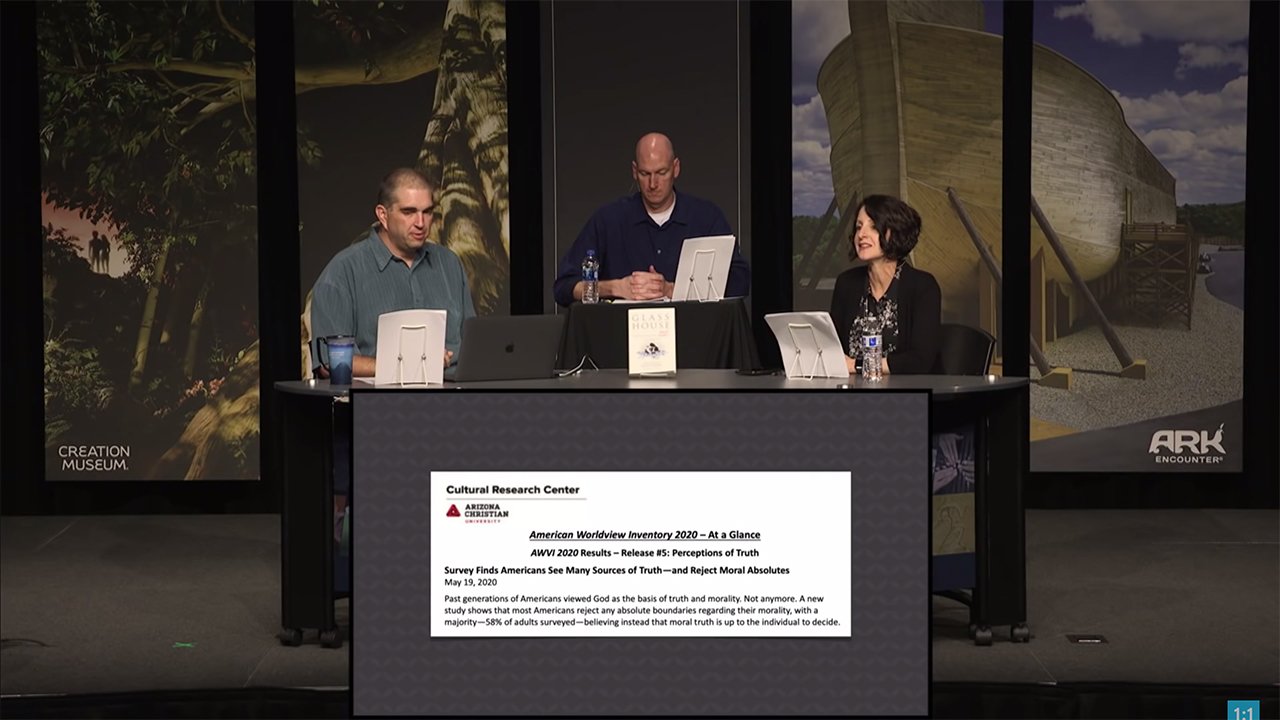 Who defines moral truth? Well, according to a recent survey, over half of American adults (58%) say you get to decide what’s right and wrong for yourself. And it’s not just those outside the church who think this way—it’s prevalent even among those who attend evangelical churches, with 46% rejecting the idea of absolute moral truth.

According to the research, only 43% of professing born-again Christians believe in the existence of absolute truth! However, almost nine out of ten adults (85%) who do have a biblical worldview reject the idea that moral absolutes do not exist and that people must create their own moral standards!

So, in the minds of Americans, where does “truth” come from?

The survey found that the most common notion is that God is the basis of truth—but it was a minority of only four out of ten adults (42%). Another four out of ten believe that either inner certainty (16%), scientific proof (15%), tradition (5%), or public consensus (4%) leads to knowing truth. The remaining two out of every ten adults said that either there is no such thing as truth (5%) or that they do not know the basis of truth (13%).

For those who say there’s no such thing as truth, do they accept their statement as truth?

Oh, just a side question here. For those who say there’s no such thing as truth, do they accept their statement as truth?

This study points to the increasing secularization of our culture—a secularization also impacting many in the church. No longer is God’s Word seen as the moral authority that is foundational to (and governs) our beliefs and actions. Instead, we get to decide right and wrong by what feels good for us. Which ultimately means that anything goes. This is actually a natural consequence of the naturalistic evolutionary worldview that dominates our culture. If there’s an ape-like creature in our ancestry, then we just evolved, there’s no God, and we get to set the rules. Moral relativism quickly becomes the belief of the day.

Even many of those who would claim God is the basis for truth likely don’t believe God’s Word defines truth. Rather, they believe that their version of God—a god they’ve created in their own likeness—determines truth for them. And sadly, many in the church believe they can use man’s beliefs (like evolution/millions of years) to reinterpret God’s Word and declare that this is what God’s Word means to them—making it subjective depending on what they themselves make it to mean. All of this is exactly what happened in Genesis chapter 3 when the devil tempted Adam and Eve to doubt God’s Word and to be their own god. And because of sin, our nature is such that we want to question God’s Word and be our own gods to decide what is “truth” for ourselves. Of course, as Christians, we can overcome this in Christ and the work of the Holy Spirit in our hearts and minds.

Parents especially but also pastors, Sunday school teachers, and others who have influence on the next generation need to take seriously the charge to speak God’s Word to the next generation. We need to teach them to think foundationally, understanding that God’s Word forms the foundation for our thinking in every area. People are adrift with moral relativism, not understanding how to think on moral issues beyond how they feel or what some popular personality tells them. This kind of thinking is dangerous for individuals, families, and societies! Here in America, we’re already seeing the outworking of this thinking in the various social issues going on today.

There is absolute truth. It comes from God and his Word, as God is the absolute authority for everything because he is the Creator. Let’s continue to point people—especially our children—back to the Word of God as our authority in every area.

This item was discussed yesterday on Answers News with cohosts Dr. Jennifer Rivera, Tim Chaffey, and Roger Patterson. Answers News is our weekly news program filmed live before a studio audience here at the Creation Museum and broadcast on my Facebook page and the Answers in Genesis Facebook page. We also covered the following topics: