Getting better all the time?? 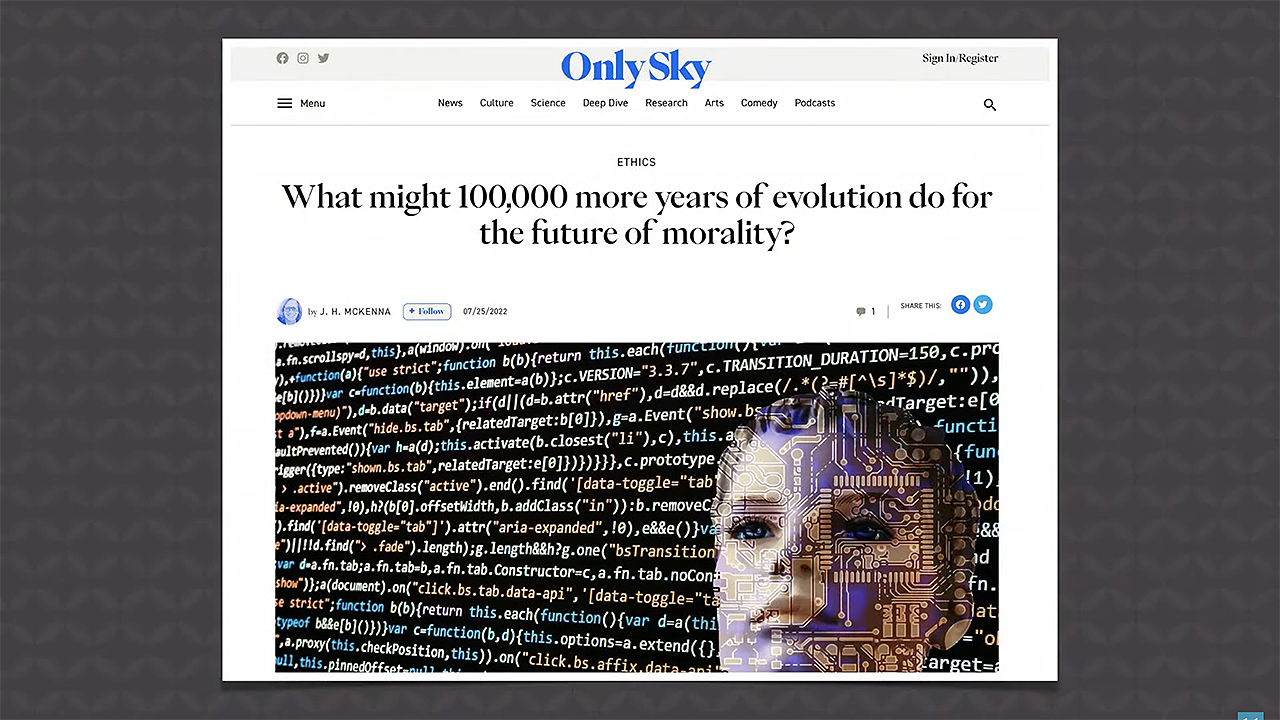 Where did morality come from? How you answer that question will depend on your worldview and on what foundation you base your thinking. And that was powerfully illustrated in a recent ethics piece titled, “What might 100,000 more years of evolution do for the future of morality?”

This article specifically focused on sexual ethics (something that doesn’t really seem to exist in secular culture throughout the West anymore!), arguing that, for hundreds of millions of years, creatures just did whatever they wanted until “a mere several thousand years ago,” when human brains invented moral codes to regulate sexual behavior. But, the article continues, humans originally had a hard time living up to these codes . . . and evolution explains why:

But humans found it difficult to live up to those sexual codes. It was as if hundreds of millions of years in the evolution of animal sexual attraction and the biological urge to propagate could not be easily blunted by behavioral norms that arrived only ‘yesterday.’

There was an evolutionary mismatch between the human multimillion-year-old amoral self and a newly evolving moral self. Here’s how the mismatch operated vis-à-vis sex: Humans devised moral sexual dicta that humans could not easily perform. Human sexual moral rules outstripped human evolutionary capabilities.

In the evolutionary view, morality is nothing more than societal norms that humans thought of and attempt to keep.

In the evolutionary view, morality is nothing more than societal norms that humans thought of and attempt to keep. In other words, it’s utterly arbitrary, subjective, and inconsistent—and why should anyone bother following arbitrary, inconsistent morality?

Before I continue reviewing the article, I do want to highlight something for those who mix evolution and millions of years with the history God has given us in his Word. Evolution is an idea that attempts to explain the origin of everything apart from God, including morality. And yet the Bible is clear that morality comes from God and the conscience that he has stamped on the heart of each person (Romans 2:12–16). So, who will you believe when it comes to this issue: man’s ideas regarding morality (which undermine virtually everything Scripture teaches about sin and law) or God’s Word?

Now, back to the article. It continues by saying:

If this is the case—that human minds intuited a future that was nonexistent and impracticable at the moment of initial moral ideation—can some part of human ideation be viewed as vaticination, as a prophecy of things to come for humanity? The fact that humans can even ponder a thing called ‘the future’ and imagine enhanced moral behavior in that future seems remarkable. And hopeful.

I’m hopeful enough to think we are at the beginning of the human story and nowhere near its end. What if our very minds—replete with anticipation of an increasingly moral, far distant future—provide clues for a lengthy human tenure on earth? What if our good thoughts are adumbrations of good deeds to come?

Sexual rectitude became easier after a few thousand years of sexual morality. Time, and lots of it, was crucial in the development of our moral sense. Maybe a hundred thousand more years of evolution (or a million years) will empower humanity to immediately align human bodily capabilities with human moral sensibilities in all areas of moral performance.

Basically, this author is arguing that humans thinking of an ideal moral state will eventually produce one through evolutionary processes, given enough time. Really, it’s a false gospel this evolutionist is peddling! It’s a “gospel” that gets the problem wrong (we have wicked hearts in rebellion against God, not bodies that haven’t evolved enough to do what our minds want them to), and the writer gets the solution (lofty moral thoughts and more time) wrong, too!

The true gospel is so much more hopeful and beautiful than anything evolutionists can imagine.

The true gospel is so much more hopeful and beautiful than anything evolutionists can imagine. The true gospel says that our natural state is sinful (Romans 8:7) and that we’re dead in our trespasses (Ephesians 2:1) and slaves (John 8:34) to sinful passions (hence why we can’t do the good we want to do and avoid the evil we want to avoid!) apart from Christ. But the beauty is that this is us apart from Christ.

Christ, fully God and fully man, came to this earth and did what Adam, and no human since him, has been able to do: perfectly obey God’s commands (2 Corinthians 5:21). This perfect God-man then went to the cross, bearing our sin upon himself, and died in our place, taking our penalty of death for us (1 John 2:2). God’s holy wrath against sin was poured out on Jesus when he bore our sin. Three days later, Jesus rose from the grave, conquering sin and death. Now Jesus offers the gift of forgiveness to all who will turn from their sin and trust in Christ (Romans 10:9). And someday those who have trusted in Christ will be with Christ in heaven where there is no longer any sin (or death or suffering).

This is such good news! We don’t have to just have some kind of “optimistic and utopic” hope that humans will someday evolve to become more moral. We can turn from our sin and to Christ today, be immediately freed from the power of sin, and someday be fully sanctified and perfectly moral (according to God’s standard of morality).

Evolution isn’t just a false view about the past; it’s also a false view of the future. It’s an anti-God religion. The true history of the universe and everything else is found in God’s Word—and so is the truth about the future and how we can enjoy God forever.

I discussed this item today on Answers News with cohosts Dr. Georgia Purdom and Rob Webb. Answers News is our weekly news program filmed live before a studio audience and broadcast on my Facebook page and the Answers in Genesis Facebook page. We also covered the following topics:

Watch the entire episode of Answers News for August 1, 2022.