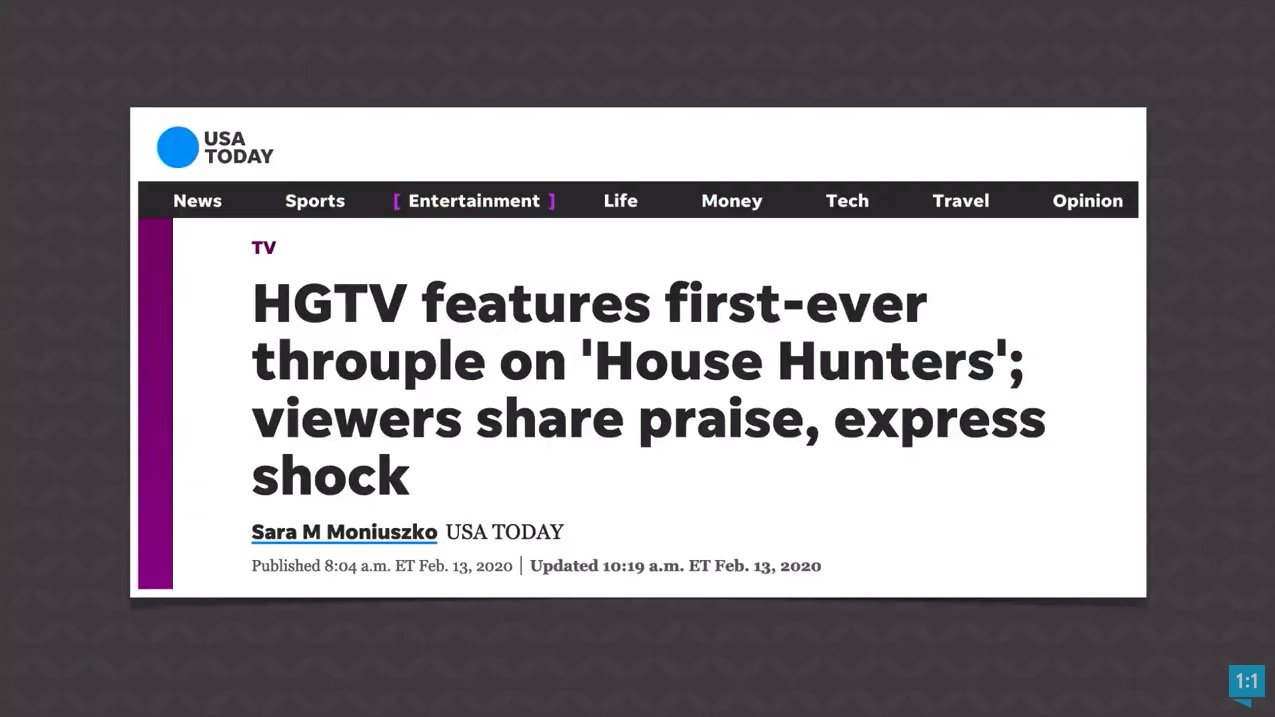 What’s a “throuple”? Well, I predict it’s a word you’re going to be increasingly seeing in the news media and other places. Why? Because it represents the direction that our culture is going as it spirals further into sexual immorality and anti-biblical lifestyles. You see, a “throuple” is a “three-person couple.”

Featured on HGTV’s House Hunters (once considered a family-friendly television program) this “throuple”—a married couple and a second woman who is in a relationship (sealed with a “commitment ceremony” in Aruba) with both the husband and “bisexual” wife—were seeking a house in Colorado Springs. It needed to fit three master bathroom sinks, mesh with all three personalities, and have room for the couple’s two children. Reportedly, during the episode, they shared how they met at a bar and became involved in this relationship. And it appears that their story, and house hunt, is featured just like any other relationship on the show—as totally normal, natural, and wonderful.

And if marriage can be between two men or two women, why not between a man and two women (or some other combination)?

And that’s how it begins. We saw this same thing happen with the LGBT, gay “marriage,” and transgender revolution—the media began portraying these sinful lifestyles and choices as normal and natural: These are people, just like you, who are oriented a different way than you—so who are you to judge them and say what they are doing, that makes them happy, is wrong?

Now, from their worldview, they are right! Without an absolute authority, anything goes. And if marriage can be between two men or two women, why not between a man and two women (or some other combination)? It’s completely arbitrary to draw a line that says, “this is okay, and this isn’t” from the secular view.

As Christians, however, we have an absolute authority—the Word of God. God has defined marriage in Genesis 1:27 and 2:24, and he defined it as between one man and one woman for life. Jesus confirmed this in Matthew 19:4–5. Two men or two women don’t make a marriage. A man and two women—no matter how “committed”—isn’t God’s design either. It’s a sinful arrangement and an attack on marriage and the family!

We’re going to increasingly see these kinds of relationships portrayed in the media as secularists continue to push the radical sexual revolution that seeks to destroy marriage and the family. To withstand this tide of sexual immorality, we need to have our feet and thinking grounded firmly in the only unchanging foundation for morality—God’s Word.

Our culture seems to be in a downward spiral, hurtling towards the description of the people before the Flood recorded in Genesis 6:5:

The LORD saw that the wickedness of man was great in the earth, and that every intention of the thoughts of his heart was only evil continually.

This item was discussed on Monday on Answers News with cohosts Ken Ham, Dr. Georgia Purdom, and Bodie Hodge. Answers News is our weekly news program filmed live before a studio audience here at the Creation Museum and broadcast on my Facebook page and the Answers in Genesis Facebook page. We also covered the following topics:

Watch the entire episode of Answers News for February 24, 2020.