A literate foundation for ancient Jerusalem

Seven letters have survived since King David’s time on a bit of pottery beneath old Jerusalem. Are these letters “physical remains validating biblical stories”? That’s the description given them by a FOX News anchorwoman discussing the find with Dr. Richard Freund, Director of Archaeological Excavations at the University of Hartford Center for Judaic Studies. 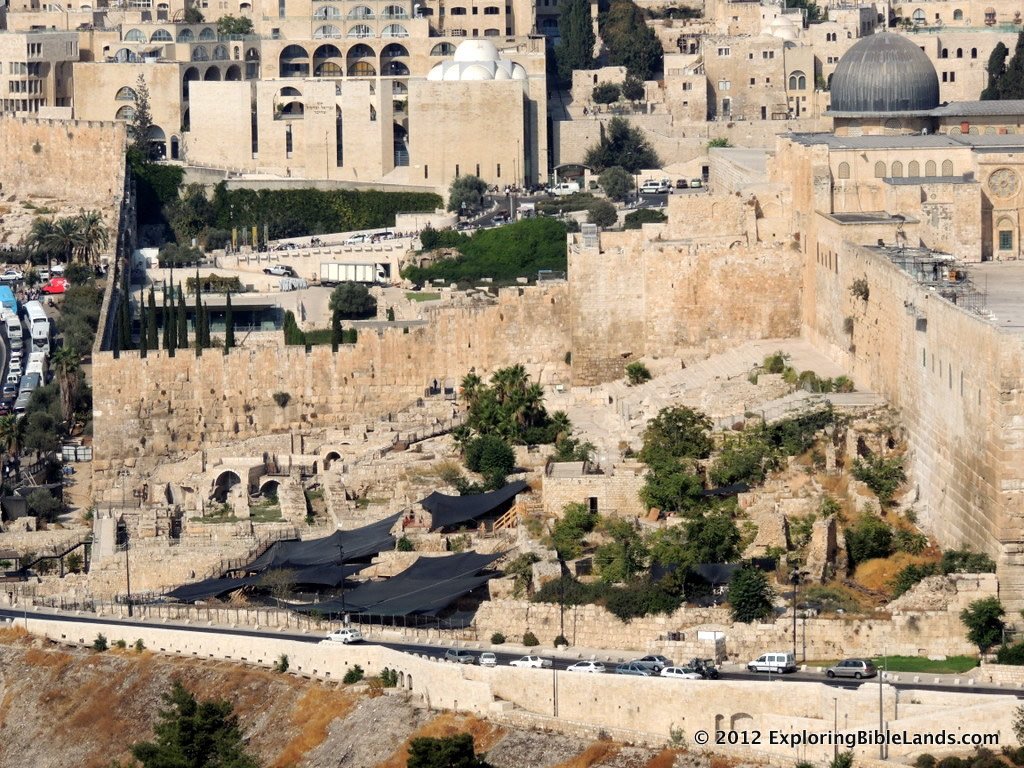 An excavation team led by Dr. Eilat Mazar has been digging for several summers through layers of ancient Jerusalem in the Ophel mound excavation (covered by the black screens) on the south end of the Temple Mount. Dr. Mazar considers the Bible a “genuine historical account” that guides her work. “I work with the Bible in one hand and the tools of excavation in the other,” she says. “The Bible is the most important historical source.”1 Image from ExploringBibleLands.com. 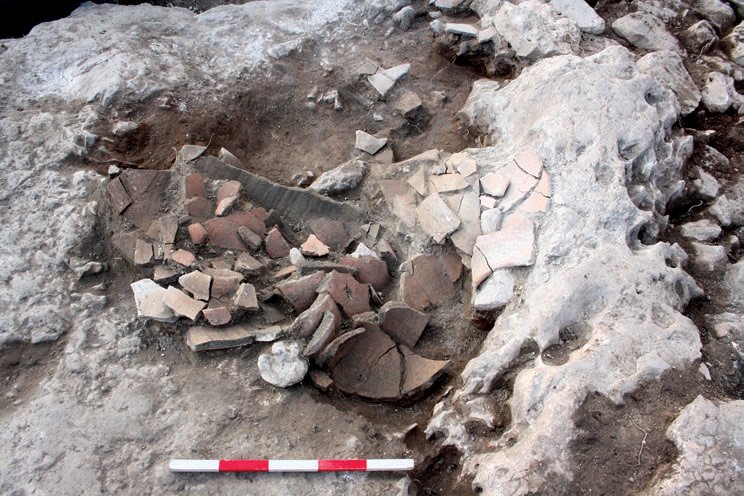 These potsherds were found in the foundation of a 10th century B.C. building at the Ophel excavation at Jerusalem. Image from FoundationStone.org.

The meaning of the seven letters near the rim of this 3,000-year-old pot found at Jerusalem is enigmatic, but the unspoken message is consistent with presence of the literate Hebrews at Jerusalem at the time the Bible indicates King David ruled. Image from FoundationStone.org.

Letters about an inch tall were neatly pressed into the clay along the rim of a neck-less jar—a pithos—before it was fired. The inscribed pieces of this pithos and several others were unearthed last year in the Ophel mound, between the Temple Mount and the old City of David, by Israeli archaeologist Dr. Eilat Mazar. All the pithoi, made from clay matching that in the region, had been used as filler in the foundation of a building 3,000 years ago.

The seven letters from the incomplete inscription do not spell a word in any known Semitic language. Dr. Shmuel Ahituv, who analyzed the letters, thinks they are proto-Canaanite but considers the meaning “enigmatic.” He suggests they could be a “non-Semitic combination”2 referring to the jar’s contents or its owner or the craftsman who made it. Dr. Ahituv suggests the potter was Canaanite, possibly Jebusite.3 Jebusites occupied Jerusalem before it fell into David’s hands (2 Samuel 5:7–25).

The fact that the inscription was likely written by an ordinary craftsman suggests that three millennia ago written language was part of everyday life at Jerusalem and not the exclusive property of the rich and the rulers. Dr. Christopher Rollston, author of Writing and Literacy in the World of Ancient Israel: Epigraphic Evidence from the Iron Age, comments, “We have here very good evidence for the (fairly) nice hand of someone incising a pot (before firing).”4

The discovery indicates that someone was writing in the region by the time the biblical David ruled from Jerusalem.5 But could that someone have been writing in early Hebrew? Quite possibly.

Some skeptics insist illiterate ancient Hebrews would have been unable to write their own names and jar labels much less document in “real time” the biblical records, genealogies, and events 3,000 years ago. If the inscription were early Hebrew, it would join the Gezer calendar and a recently translated Hebrew inscription from Khirbet Qeiyafa—the oldest known samples of Hebrew writing6—in providing archaeological documentation for Hebrew literacy in the time of David.

In trying to determine the language used by the potter, archaeologists compare the letters to other inscriptions from the same time period. These include the Khirbet Qeiyafa ostracon—a shard bearing a complex Hebrew inscription in ink. It was discovered a few years ago at a 3,000-year-old fortification near the ancient Philistine border. Khirbet Qeiyafa, about 18 miles southwest of Jerusalem, overlooks the valley of Elah, where David fought Goliath (1 Samuel 17).

Several ancient languages used similar alphabets. The letter shapes in the inscription suggest they were written left-to-right. Standard Hebrew—including that used on the ostracon found at Khirbet Qeiyafa—is written right-to-left. However, at this time in history, the ancient Hebrew, Egyptian, and Canaanite languages could all be written in either direction.7

Associates for Biblical Research ancient languages expert Douglas Petrovich contends the Ophel letters are not Canaanite but Hebrew. Ancient Hebrew and Middle Egyptian are linguistically related, and Petrovich explains that each of the letters has characteristics more typical of their Egyptian equivalents than their Canaanite ones. He writes, “The fatal flaw of Canaanite as the language of the Ophel inscription’s script is the Egyptian roots of the script, as opposed to Canaanite roots. All six of the clearly decipherable letters of the Ophel inscription find their roots in Middle Egyptian, not in Canaanite.”8 During an interview with FOX News, though Dr. Freund refers to the letters only as a “seven letter inscription,” he does not dispute the anchorwoman’s reference to the inscription as “Hebrew.” Hebrew letters would archaeologically demonstrate the Hebrew presence in Jerusalem at the time the biblical King David ruled.

The Time Has Come to Talk of Kings

Freund explains on FOX News, “Jerusalem was destroyed twice, 23 times nearly destroyed, 52 times attacked in antiquity so piecing together from broken remains the history of Jerusalem is very difficult.” Summing up the discovery’s significance, he says:

The main thing is that when you have an inscription from the 9th century [BC] and you piece it together with other artifacts from the 10th century, it’s very hard to say that there wasn’t a 10th century Jerusalem at the time when King David would have been ruling, and each one of these little pieces contributes to the whole.

The problem is that until about 20 years ago, we had so little that it led to people saying, ‘Well, maybe there wasn’t a King David, maybe there wasn’t a King Solomon, maybe this was a creation of writers writing in a different time period who wanted to have this mythical past and invented these characters.’ Each one of these discoveries shows us that there was a real history in real time in the time period in which King David would have ruled.9

“Out with David and Solomon is the latest trend in the [liberal] archaeological world,”10 describes the modernist rejection of biblical history, according to biblical archaeologist David Down. The old claim of some liberals disputing King David’s existence11 was an argument from silence. That fallacy should have evaporated in 1993 with the discovery of “house of David” carved on a basalt stele at Dan by an ancient enemy of Israel (probably Hazael of 2 Kings 8:7–15).12 The Khirbet Qeiyafa discoveries13 affirm the existence of not only a real Kingdom of Israel but also complex Hebrew writing in David’s time.14

The Ophel inscription joins the growing body of archaeological evidence supporting the biblical truth that ancient Hebrews were literate.

Translator Gershon Galil of the University of Haifa says Khirbet Qeiyafa’s ostracon demonstrates “that it was highly reasonable that during the 10th century BCE, during the reign of King David, there were scribes in Israel who were able to write literary texts and complex historiographies such as the books of Judges and Samuel.”15

The Ophel inscription—though untranslated—joins the Khirbet Qeiyafa ostracon as part of a growing body of archaeological evidence supporting the biblical truth that ancient Hebrews were literate. Rather than inventing a post-dated history, they had the linguistic and cultural tools in place to record it from the earliest days that Israel was recognized among other monarchies of the ancient world.

A Biblical View of Archaeology

From God’s Word we know that God not only inspired the biblical writers of David’s time—including David (2 Samuel 23:2; Acts 1:16; Mark 12:36)—to record the workings of God in history but also earlier writers such as Moses, who lived around 500 years earlier. Jesus Himself referred to the writings of Moses (John 5:46). And God not only sent Jesus Christ into the world through the Hebrew people, but Romans 3:1–3 informs us that God utilized Hebrew writers to record His written Word. We as Bible-believing Christians would still trust God’s Word (2 Timothy 3:16–17) down to the last detail, including its history, without a single stone or shard to corroborate it. Nevertheless we are delighted—though not surprised—when archaeologists dig up material supporting the truth that we already know from the Bible.

So do Christians need archaeological discoveries such as these to “prove” the Bible? No. But tangible touchable view-able evidence not only helps some people to grow in their faith but removes the stumbling blocks to faith for others. And the more archaeology reveals about the ancient world, the more complete picture and the better contextual understanding we have of the life and times of people whose lives are discussed in the Word of God.