In the Disney animated classic The Jungle Book, the orangutan King Louie sings:

I wanna be a man, mancub,
And stroll right into town,
And be just like the other men,
I’m tired of monkeyin’ around!

Tilda, an orangutan from Borneo in 1965 and now residing at Cologne Zoo in Germany, seems to be on the way to realizing King Louie’s dream. At least she’s livin’ the dream for researchers seeking to unravel the evolutionary origins of human speech! 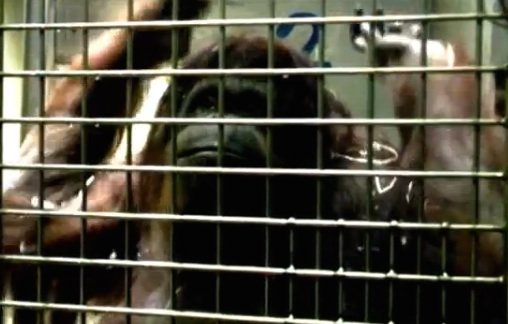 Tilda the orangutan, in a clip of her activity from PLoS, excitedly waves and claps while making unique noises. Image from video at WashingtonPost.com.

Only human beings speak.2 The syllables and words, phrases and sentences people use to speak their minds all over the world consist of rhythmic sequences of consonants and vowels. Consonants and vowels are the building blocks of speech. Despite their remarkable variety, all spoken languages rely on our ability to rapidly produce sequences of consonant and vowel sounds—typically 3–8 times per second.3 Only humans have shown the ability to ascribe symbolic meaning to these sequences of sounds, to use those sounds to express creative thoughts, and to communicate those thoughts with other humans.

Evolutionary researchers assume that all that exists has an evolutionary origin, but they admit the origin of speech is “enigmatic.”

Where did humans acquire this unique ability? Evolutionary researchers assume that all that exists has an evolutionary origin, but they admit the origin of speech is “enigmatic.”3 Do people speak because they have thoughts worth putting into words, or did ancestral humans learn to think great thoughts because they evolved the vocal apparatus to make the necessary sounds? The annoying reticence of great apes—our supposed evolutionary cousins—on this subject, has proven a source of consternation to evolutionary researchers who seek to learn the nature and origin of man from Darwinian musings.

Researchers from Liverpool John Moores University (LJMU) and the Pongo Foundation, are excited to finally find a great ape—Tilda—able to make both consonant-like clicks and vowel-like sounds and to rhythmically repeat these sounds at a rate comparable to that used in human language. They note too that Tilda speaks her peace at will, specifically to get attention from her human care-givers. This is the first time great apes have been seen using a speech-like pattern like this to communicate.

Macaque monkeys are able to vocalize in a speech-like rhythm, “offering a plausible evolutionary stepping stone towards speech,”3 the researchers write, but because evolutionists believe great apes are closer to the human lineage than monkeys, they have trouble explaining the leap past monkeys to people, “a time gap of approximately 25 million years.”3

“That was indeed the situation before our study with Tilda,” explains Lameira. Chimpanzees and other great apes can string a few sounds together in a way that seems to have meaning, but they’ve never been shown to do so in a speech-like rhythm. Orangutans typically use “grumphs, gorkums and grumbles”3 for alarm and arousal calls, and they don’t combine those calls with any sort of lip motions that break the sounds into a speech-like pattern. Thus Tilda is unique, and researchers think she learned her speech-imitative sounds from humans. Since human infants imitate the speech of their human care-givers, this presents an additional interesting analogy to human language acquisition, and in the view of the researchers, an additional prop for the evolutionary story.

Tilda was captured in 1965 at about two years of age and came to a Swiss zoo in 1975. Though most of her first decade in captivity remains a mystery, she was probably trained as an entertainer. She claps her hands and waves her arms for people.

To get the attention of her human caregivers, Tilda uses two sorts of sounds, each produced with a rate and rhythm comparable to that found in human speech. She is able to make clicks, which are air-stopping consonant-like sounds. (Many human languages use clicks.) And she is able to make warbly rhythmic vowel-like sounds that researchers call “faux-speech.”3 Tilda even seems to have voluntary control of some of the muscles in the throat that modulate the sounds she makes.3

Tilda only uses these rhythmic clicks and warbles to communicate to people her desire for some edible goodies:

Clicks and faux-speech produced by Tilda were deemed to be communicative signals because Tilda only produced these calls in the presence of and directly facing her caretakers during feeding time, and she assisted her calls several times with pointing with her protruded lip and/or index finger towards the food in the caretaker’s hand.3

“These calls were produced by quickly opening-and-closing the lips, much like humans do when talking,” says lead author Adriano Lameira. “One of these calls presented similarities with human consonants, and the other with human vowels, the two basic building blocks of human speech.”

Tilda can also whistle, although she isn’t the first great ape known to do that. Bonnie, at the National Zoo, surprised experts by whistling in 2008. Serge Wich then explained that up to that point experts had doubted great apes could voluntarily expand their menu of sounds, saying, “It counters long-held assumptions that non-human primates have fairly fixed sound repertoires that are not under voluntary control. Being able to learn new sounds and use these voluntarily are also two important aspects of human speech.”

But whistling isn’t speech-like. Tilda’s repertoire is far more complex than Bonnie’s. And based on 6,000 hours of observation of Tilda and 110 other orangutans, Tilda seems to be the only orangutan that makes her signature clicks and warbles. Researchers analyzing Tilda’s prattling say that until Tilda spoke up, “Primates signals exhibiting very quick open-close cycles of the lips were only known in a couple of old world monkeys, not great apes, raising questions of continuity between these signals and human speech.”

Tilda’s abilities demonstrate that great apes are physically able to produce speech-like sounds and able to use them purposefully, just as many other domestic animals use other tricks to get treats. The researchers report:

Our findings demonstrate irrevocably that great apes are not respiratorily, articulatorilly, or neurologically constrained for the production of consonant- and vowel-like calls at speech rhythm.3

But the researchers believe this observation is evidence for their unverifiable evolutionary interpretation, so they conclude:

Orangutan clicks and faux-speech confirm the importance of rhythmic speech antecedents within the primate lineage, and highlight potential articulatory homologies between great ape calls and human consonants and vowels.3

Thus equipped to speak, it would seem that our evolutionary ancestors only had to think of something to say, figure out how to assign symbolic meaning to the sounds they could make, and get their friends to understand what they meant. At least that’s the evolutionary view.

Does the evidence that great apes are able to learn to make a speech-like series of consonant-like and vowel-like sounds support the evolutionary origin of man? Does the fact an animal can purposefully use those sounds to communicate with its caregivers support the notion that man evolved from an ape-like ancestor? Has any sort of evolutionary gap been filled?

Does the fact an animal can purposefully use those sounds to communicate with its caregivers support the notion that man evolved from an ape-like ancestor?

No, no, and not at all. Other animals—not just monkeys—are able to vocalize in imitation of human speech. And they are even able to do so voluntarily and purposefully to get a yummy treat. How about parrots? No one suggests African grey parrots are the close cousins of people because they learn to demand a treat while making us laugh at ourselves and our imitators. Tilda unquestionably has some dandy tricks in her repertoire. Just watch the short videos of her and see. (My dachshund was quite impressed!)

But to suggest that Tilda supplies the missing link in linguistic evolution—that her talents “confirm the importance of rhythmic speech antecedents within the primate lineage”—is a worldview-based stretch with no basis in observational science.

The evolutionary origin of language puzzles evolutionists, but the Bible provides answers about the origin of language4 on the basis of historical facts reported by the most reliable eyewitness of all, the creator God of the universe. From the first three chapters of Genesis we learn that He created Adam and Eve, our first parents, with the ability to communicate with each other and with Him. Adam was given the job of naming the animals, an exercise in the creation and use of symbols to communicate, right off the bat. And that Adam and Eve possessed the abstract thinking ability that is a hallmark of human language is evident from the fact that they were soon using their linguistic talents to make excuses and shift blame for their rebellion against the Creator.

Regardless of the physical abilities of some animals to make rapid repetitive noises and use them to get a goodie, true linguistic abilities are not in the non-human toolkit. And these authors do not claim that they are. (Creationist and linguistic expert Dr. John Oller has several excellent articles on this website exploring these aspects of speech. Have a look at “Words Are Us” and “More Than PIE.”)

The observational science in this study focused instead on whether great apes are physically able to produce the sorts of sounds that comprise a spoken language as used by humans, not whether they have anything worthwhile to say. And while the answer to that question is apparently “yes” or at least “maybe,” that tells us nothing about the origin of language in humans because humans did not evolve from ape-like ancestors shared with great apes, nor did humans have to evolve the ability to speak and to think as only humans do. The authors’ conclusion that “Orangutan clicks and faux-speech confirm the importance of rhythmic speech antecedents within the primate lineage” is rooted in their evolutionary worldview, ignoring the eyewitness history of language in the Bible and clinging to the unsubstantiated and unverifiable claim that humans evolved from ape-like ancestors.