Piecing Together Human History, One Adaptation at a Time

In a new comprehensive review of humanity’s story, evolutionary anthropologists tell their tale of how hominins1 in many locales progressed up the evolutionary ladder by using whatever useful traits they each possessed to cope with intense wet and dry seasons in ancient Africa. Something as simple as long legs was a step up. The sum of all those traits represents the gradual evolution of the human condition.

It is certainly true that what we consider as ‘modern’ traits seem to have been assembled piecemeal in Africa over a long period of time. The traits shown by Australopithecus sediba in southern Africa show that conditions were driving the evolution of human-like features in parallel in different regions, and potentially at different rates, around 2 million years ago. I think that the development of tool-making and carnivory could have spread across different australopithecine populations and even species across Africa, catalysing comparable evolutionary changes in anatomy and behaviour, including increasing brain size and complexity, greater terrestrial mobility, and a reduction in the size of the jaws and teeth. If this is so, disentangling the actual single pathway that led to the first members of the genus Homo will be a difficult task.2 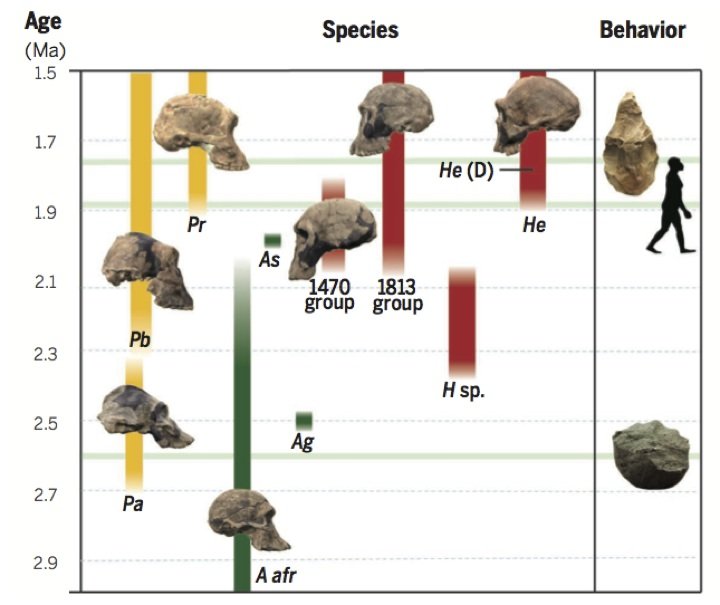 This chart from the recent Science review of hominin fossils lumps australopithecines and all fossils considered Homo together into a continuum. The authors maintain that all were making diverse parallel evolutionary progress in different geographical regions. Conventional evolutionary dates based on a number of unverifiable worldview-based assumptions are recorded on the left. Abbreviations: Pa, Pb, and Pr—Paranthropus species of australopithecines; A afr, Ag, As—Australopithecus species listed in text; 1470 group—Homo rudolfensis, 1813 group—Homo habilis; He—Homo erectus; He (D)—Homo erectus from Dmanisi; H sp.—other Homo. Tools: Oldowan (bottom) and Acheulean (top); man walking = Eurasia migration. Image by Antón, Potts, and Aiello, via Science.3

Anthropologists Susan Antón, Richard Potts, and Leslie Aiello, compare individual characteristics of australopithecines—Australopithecus sediba, A. africanus, A. afarensis, A. garhi, Paranthropus boisei, P. aethiopicus, and P. robustus—and fossils considered “early Homo” such as Homo erectus, Homo habilis, and Homo rudolfensis . They correlate fossil data with information about the apparent climates in which they each lived, foods they ate, the social structure evolutionists believe they had, and tools that some of them might have used. The evolutionary key to becoming human, they conclude, was the acquisition of diverse adaptive traits by an array of hominins evolving simultaneously.

“We can tell the species apart based on differences in the shape of their skulls, especially their face and jaws, but not on the basis of size. The differences in their skulls suggest early Homo divvied up the environment, each utilizing a slightly different strategy to survive,” explains Antón. “Traits once thought to define early Homo, particularly Homo erectus, did not arise as a single package,” Potts says. “Some features once considered characteristic of Homo are found in Australopithecus. In terms of the history of evolution there is no single benchmark that separates the different species, no single point of transition. It was a mosaic process with some characteristics evolving before Homo and some much later.”

The authors consider any isolated characteristic that could be comparable to a human trait as progress toward human-ness. Thus they blur the distinction between humans and australopithecines apes.

A popular Star Trek Voyager character’s oft-spoken comment to anyone facing change was, “You will adapt.” The authors of this review would add that adaptability was the defining characteristic of humanity’s ancestors. “Taken together, these data suggest that species of early Homo were more flexible in their dietary choices than other species,” explains Aiello. “Their flexible diet—probably containing meat—was aided by stone-tool–assisted foraging that allowed our ancestors to exploit a range of resources.” The team believes such dietary adaptability was the key to becoming human in the first place. Coauthor Richard Potts says, “This flexibility continues to be a hallmark of human biology today, and one that ultimately underpins the ability to occupy diverse habitats throughout the world.”

“Unstable climate conditions favored the evolution of the roots of human flexibility in our ancestors,” explains Potts. “The narrative of human evolution that arises from our analyses stresses the importance of adaptability to changing environments, rather than adaptation to any one environment, in the early success of the genus Homo.”

Tricks of the Trade

The outcome is unfortunately not altogether straightforward but is instead affected by a scientist’s biases.

Identifying exactly what species a collection of crushed, distorted fossil fragments belong to is understandably problematic. Reconstructing such fossils into three dimensions, getting the relationships and relative positions of all the parts correct, and accurately surmising the shapes of the missing pieces are daunting tasks. The outcome is unfortunately not altogether straightforward but is instead affected by a scientist’s biases—especially the bias that these fossils must be transitional forms in “the narrative of human evolution.” Without an understanding from Scripture that humans did not come into existence through a series of stepwise transitions from animal predecessors to guide the reconstructions, it is only natural that evolutionary paleontologists looking for transitional forms see just that.

Variations in Homo erectus fossils from the more classical African ones to the very unusual and likely diseased ones at Dmanisi have also led to some confusion about what was really Homo. For instance, were Homo habilis and Homo rudolfensis really Homo—small and large varieties respectively—or should they be considered australopithecines? Evolutionists have debated this question for years.

In the case of Homo rudolfensis, a careful mixing and matching of previously enigmatic fossil fragments with a jaw discovered in 2012 suggests that Homo rudolfensis—also commonly known as KNM-ER 1470—was human. Homo habilis, however, is a poorly defined collection of human and ape fragments. Two decades after the first H. habilis was discovered, the first example consisting of both the skull and body was found, demonstrating that particular specimen was only an australopithecine ape. It is no wonder that many evolutionists have contended habilis belongs among the australopithecines rather than in “Homo.” These reviewers see all these as just different varieties of ancestral humans working their way up the evolutionary tree by coping with change.

What does it take to be human? The ability to walk upright? Small teeth and long legs? A big brain? Will a medium size one do? A flat faced skull with nasal bones to hold up your glasses? The ability to use a stone tool, or must one plan, design, and create tools for future needs? Is it the ability to think great thoughts—to contemplate the past, the future, and the meaning of life? Must one fulfill multiple qualifications, or only one or two? Evolutionary anthropologists have now decided that, all things considered, every little step counts.

Evolutionists reconstruct our history as a temporal paleojigsaw of evolutionary innovations. They have no biological mechanism by which all these disparate improvements supposedly come together to produce an evolved human that is better than the sum of his parts. The Bible instead provides us with our Creator’s eyewitness account, a history consistent with observable science—living things reproducing and varying only within their created kinds for instance.

What does it really mean to be human? From the Bible we know that the Creator of man made Adam from the dust of the ground, breathed into him the breath of life, created Eve from a part of Adam’s own body, and declared that He had made Adam and Eve in His own image (Genesis 1:26–28; 2:7). He did all this on the same day He created all kinds of land animals. Those who claim God “used evolution,” incidentally, are calling God a liar. God’s Word leaves no room for an evolutionary origin.

God’s Word gives us the historical framework to understand that a variety of human beings, all descended from Noah’s family, spread across the world from the Tower of Babel. Isolated from one another, it is no surprise and that some groups developed characteristic traits, producing people now described as Homo erectus, Neanderthals, Denisovans, and so forth. The Bible also helps us see that all kinds of land animals got off the Ark at the end of the Flood and likewise reproduced, dispersed, and developed diversity within their created kinds.

Thus we see in the fossil record some extinct apes and some extinct humans, but no ape-men. Both animals and the many groups of people who dispersed from the Tower of Babel had to cope with dramatic climate changes in the centuries after the global Flood. Their adaptive ingenuity did not enable them to evolve into any new kind of creature, only perhaps to thrive and survive.

The bottom line is that the fossil record includes apes (including extinct australopithecine varieties) and humans (including extinct varieties). It’s a pity this review didn’t focus on figuring out which were which instead of just lining them all up and declaring all of human history to be an evolutionary mosaic.