Did We All Come from Adam and Eve?

Have genetic discoveries broken the tie that binds us to Adam?

Did we all come from Adam and Eve like the Bible clearly states, or has the human species outgrown Adam and Eve? A recent article from The Economist covers the debate about whether all humans could have really come from just two people. It reports that at the November 2013 meeting of the Evangelical Theological Society in Baltimore, Maryland, a presentation about the latest in human genetics showed a packed audience of theologians that human genetic diversity could not be the product of less than 10,000 parents. 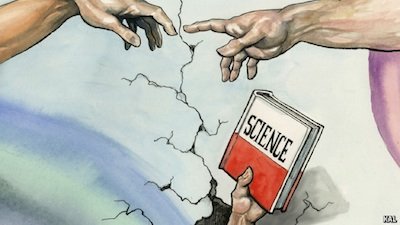 Did we all come from Adam and Eve? We must recognize that the Bible’s book of Genesis is the true history of humanity’s origins, beginning with just two people.  Only God was there, and therefore only He can provide an eyewitness account declaring how many people He created in the beginning. Some people think that scientists have disproven this biblical truth, but they have done no such thing. Genetic discoveries are actually consistent with the biblical history of human origins. Image: “All About Adam” in The Economist

The Economist article “All About Adam” correctly points out that without an authentic Adam and Eve in our past, the origin of sin and the need for a Savior—Jesus Christ—would be on shaky ground. While falsely accusing Bible-believing Christians of denying science, the article acknowledges that “much is at stake” in this dispute. What is at stake is the authority of Scripture and the foundation the Bible presents for our salvation.

Claiming that modern genetics has kicked the pegs from beneath any scientific support for the authenticity of Adam and Eve, The Economist states:

A trickier controversy has been triggered by findings from the genome that modern humans, in their genetic diversity, cannot be descended from a single pair of individuals. Rather, there were at least several thousand “first humans”. That challenges the historical existence of Adam and Eve, and has sparked a crisis of conscience among evangelical Christians persuaded by genetic science. This is not an esoteric point, says Michael Cromartie, an evangelical expert at the Ethics and Public Policy Centre, a Washington think-tank: many conservative theologians hold that without a historical Adam, whose sin descended directly to all humanity, there would be no reason for Jesus to come to Earth to redeem man’s Fall.

The claim that human genetic diversity could not have arisen from only two original people is actually not new at all. This assertion comes from mathematical simulations done in the 1990s. These simulations assume evolution happened in order to prove evolution is true. The reasoning is entirely circular and therefore invalid.

Theistic evolutionist Dr. Francis Collins cited the “10,000 founders” claim in his 2006 book The Language of God: A Scientist Presents Evidence for Belief, He wrote that all humans “descended from a common set of founders, approximately 10,000 in number, who lived about 100,000 to 150,000 years ago.”1 In this book and a later one co-authored with Dr. Karl Giberson, The Language of Science and Faith, Collins claims the concepts of the ancestral “first couple” and the “Genesis time frame” do not “fit the evidence.” He considers the Genesis story is a mere allegory explaining how God gave human beings “a spiritual and moral nature.” Indeed, Collins asserts that only a moral nature and a yearning to search for God distinguish humans from animals.

Molecular clock dating—which sounds like something very precise and reliable—is in fact built on a series of unverifiable assumptions and circular reasoning.

Claims about how many people it took to produce modern human genetic diversity require some notion of how long it took to produce that diversity. Such dates come from the evolutionary assumptions that molecules-to-man evolution produced life and that humans evolved through a series of progressively more human-like hominids after diverging from an ape-like ancestor millions of years ago. Molecular clock dating—which sounds like something very precise and reliable—is in fact built on a series of unverifiable assumptions and circular reasoning. Like any clock, the “molecular clock” must be calibrated. And if the assumptions on which the molecular clock is based are not reliable, then all times derived from the clock are likewise invalid.

As molecular geneticist Dr. Georgia Purdom of Answers in Genesis points out, even secular scientists who accept evolution see problems with molecular clocks. She says:

In an article entitled, “Reading the Entrails of Chickens: Molecular Timescales of Evolution and the Illusion of Precision,” the authors state,

Despite their allure, we must sadly conclude that all divergence estimates [used to calibrate molecular clocks] discussed here are without merit. Our advice to the reader is: whenever you see a time estimate in the evolutionary literature, demand uncertainty.2

How Many Original Humans?

As to the simulations claiming humans arose from a pool of at least 10,000 hominid originals, Dr. Purdom points out:

Evolutionary scientists have shown in mathematical simulations that to achieve the genetic diversity of modern humans the starting initial population would need to be greater than two people. Most estimates put the number around 10,000.3 However, as discussed previously, these studies are based on assumptions about the past. For evolutionary scientists, this includes assumed evolutionary relationships, assumed mutation rates, and assumed generation times (the time between parents and off-spring does not vary). They are arbitrarily assuming evolutionary processes to try to prove evolutionary processes, which is a fallacy. If the assumptions are wrong, then the mathematical     simulations will not give an accurate initial population size necessary to generate today’s human genetic variation.4

The Economist article is wrong that Bible-belief is anti-science. The alleged conflict between “science” and the “the old-time religion”—as the article calls biblical belief—arises when “science” is defined by interpretations based on unverifiable worldview-dependent Bible-denying assumptions. The actual observations of science are not in conflict with the biblical history of the age of the earth, the global Flood, or the origin of mankind from two specially created humans about 6,000 years ago.

In fact, far from being in dispute with the Bible, modern genetic discoveries actually support biblical history! This consistency is seen in the fact that the human genome—for all its diversity—actually has far less diversity than would be expected if humanity were really as old as evolutionists claim.

The International HapMap project endeavors to study a select group of DNA similarities and differences between humans known as single nucleotide polymorphisms (SNPs).5 The SNPs are believed to be representative of the genome (total human DNA) such that what is true for them would be true for the whole genome. These studies and others have shown that the difference in DNA between any two humans is amazingly low . . . only 0.1 percent.6

Reflecting on this very low percentage, some scientists posited, “This proportion is low compared with those of many other species, from fruit flies to chimpanzees, reflecting the recent origins of our species from a small founding population” (emphases mine).7 They also stated, “[Certain genetic estimates] tell us that humans vary only slightly at the DNA level and that only a small proportion of this variation separates continental populations.”8

These findings are consistent with the Bible’s history that humans were created several thousands years ago; in other words, a short amount of time has passed, so there is little genetic variation.

Furthermore, many places in which the human genome varies occur in only two “versions.”9 This is quite consistent with the biblical truth that our founding population consisted of only two people. Furthermore, other genetic variants occur in versions restricted to specific populations, and this finding is consistent with the biblically documented dispersion from the Tower of Babel with the resulting isolation of some groups from the rest of the human population.

Evolutionary scientists reject the biblical history of humanity’s origin from just two people. Nevertheless, when a group of evolutionary geneticists in 2009 evaluated various models of human origins, they tacitly acknowledged the plausibility of human descent from the people dispersed from the Tower of Babel. What they called the “instantaneous divergence model” sounds pretty much like what happened at the Tower of Babel sometime after the global Flood. These evolutionists found that “the genetic ‘predictions’ of the instantaneous divergence model are consistent with observed human genetic variation!”10

The need for the Cross of Christ is rooted in the facts of our Creation history. The origin of sin and suffering and death and our need for a Savior is rooted in the truth of human origins as described in Genesis. Therefore it is vital that Christians avoid the compromising positions adopted by theistic evolutionists who typically claim that Adam and Eve are mere allegorical characters. Ken Ham recently discussed this problem in his blog posts, “Are There Two Kinds of Truth?” and “Understanding Original Sin.”

Christians should also be confidently able to share the Gospel of salvation by beginning with the truth that the Bible is not anti-science. Some people may doubt God’s Word and ask, “Did we all come from Adam and Eve?” We must remain firm on the authority of God’s Word, as His Word is truth. Furthermore, the wonders of modern genetics, far from unhitching humanity from Adam, is actually completely consistent with God’s eyewitness Genesis account of His special creation of two humans—Adam and Eve, the parents of every human being ever born. And just as our sin problem began with the rebellion of the “first Adam,” so God’s solution to our sin problem culminated in the sacrifice of His Son, Jesus Christ, called the “Last Adam” (1 Corinthians 15:45) because, though fully God, Jesus Christ became fully human (John 1:1–14) to bear the guilt for the sin of all people (2 Corinthians 5:21; Hebrews 2:9–10; John 3:16) on the Cross.