Forty years ago Richard Leakey rocked the evolutionary world with his discovery of KNM-ER 1470 in the Koobi Fora fossil beds east of Kenya’s Lake Turkana. Though much was missing, the parts that were there looked remarkably human, which was a problem since Leakey believed KNM-ER 1470 was 2.9 million years old, much too old for such a human-looking face to appear in the evolutionary story. After much re-dating and re-evaluation, 1470 has lost about a million years of age but none of its mystery.

This week Leakey’s wife, Meave, and colleagues have published their analysis of three more pieces in the anthro-paleo-puzzle created by 1470. KNM-ER 1470 is currently dated at 2.03 million years of age.1 The fossil is best called “1470” for short, as names assigned to it, such as Homo rudolfensis and Homo habilis, tend to change depending on how several other fragmentary and distorted specimens are classified. But at least now the three skull fragments found by Meave Leakey’s team within six miles (and 250,000 years) of 1470’s resting place may provide some clues to its real identity.

The 1470 fossil lacks a lower jaw. It seems to have the protruding nasal bones and receding orbital bones typical of humans. Its cranial capacity2 of over 700 cc is in the same general range as Homo erectus, another Homo variety known primarily from Asian fossils and considered a direct ancestor of modern humans by evolutionists. Since the fossils generally identified as Homo habilis and Homo rudolfensis suffer from even greater distortions and fragmentation, 1470’s identification has been problematic. And the flatness of 1470’s, resembling that of modern humans, has been considered unconfirmed because there was only one small fractured juncture remaining between the bones of the upper jaw and cheek. Because of these difficulties, the flatness or protrusion of the lower face is subject to the judgment of the scientist reconstructing it. Meave says 1470 has “always been an enigma.” 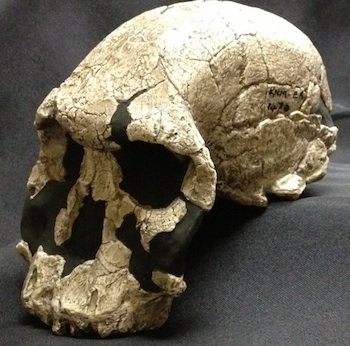 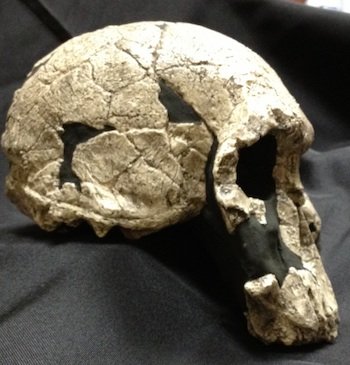 This is a cast of KNM-ER 1470, discovered in 1972. Notice the pieces that are missing (indicated by black). The cranial capacity is in the same general range as that of Homo erectus fossils. The flatness of the face was considered unconfirmed because the lower jaw was missing and the fragmented upper jaw retained only a tiny connection to the rest of the face. Cast provided by Dr. David Menton.

Three fossils dug from Koobi Fora between 2007 and 2009 and dated 1.78 to 1.95 million years old, consisting of various portions of lower jawbones, match the curvature of 1470’s palate well-enough to be considered likely of the same species, Meave’s group reports. When the “bites” of the specimens are matched up, the resulting composite face is nice and flat, just like the Leakeys thought it was. Meave now says, “We know that flat face is real—it isn’t just an aberrant specimen.” 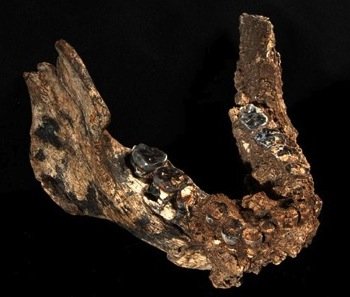 This newly discovered fossil jaw has a shape that seems to match 1470’s upper jaw and teeth. It’s not “the missing link,” though, just a matching piece that demonstrates the apparent humanity of 1470. Image by Mike Hettwer, National Geographic.3

Furthermore, 1470 matches the new jaw pieces much better than it matches the best known Homo rudolfensis fossil. Homo habilis fossils are very distorted and fragmentary, but 1470 is significantly different from fossils lumped into that group too.4 Thanks to these differences, Meave says, “With these new fossils we can definitively say there are two groups of non-erectus fossils” at Turkana within the same time-frame, and possibly three. Some evolutionists are puzzled that multiple Homo species could co-exist, but because modern monkeys sometimes live in troops of at least two species, she believes the people may have simply gotten along instead of fighting and competing. (Of course we would point out that groups of human beings with anatomical differences are able to coexist and cooperate in the modern world; furthermore, the people who dispersed from the tower of Babel, for all their differences, were cooperating just fine before God confused their languages!)

This composite image is made of the KNM-ER 1470 cranium discovered in 1972 and the most complete jawbone among the recent discoveries. (The actual mandible is smaller than 1470 but is thought to belong to a juvenile.) Notice the flatness of the face, a trait typical of humans. Evolutionists can accept the idea that two or three species of Homo inhabited east Africa nearly 2 million years ago, but they refuse to accept the eyewitness account provided by our Creator indicating He made the first man Adam about 6,000 years ago from the dust of the ground and not from apes—no evolution required. Image by Fred Spoor, via National Geographic.5

Evolutionists are continually searching for the lines of evolutionary ascent between our supposed ape-like pre-chimp ancestor and modern humans. Convinced that Homo erectus evolved by about a million years ago to be humanity’s direct ancestor, they examine other fossils to determine whether those fossils were members of the line to modern humans or a parallel but extinguished evolutionary path.

While mixing and matching with the new fossils seems to confirm fossil KNM-ER 1470 had the flat-face of a human, nothing about the findings demonstrates humans evolved from ape-like ancestors. Just as Neanderthal and Homo erectus fossils appear to be varieties of human beings, so does 1470. 6

The million-year dates are based on the unverifiable assumptions by which radiometric data is interpreted. In fact, nothing about these findings indicates anything other than the confirmation that another variety of human being was among the people descended from those dispersed from the tower of Babel. Just more descendants of Adam and Eve, who were created by God about 6,000 years ago, in His image and distinct from apes, which He created the same day. See where fossils like this one fit in the biblical timeline at “Neanderthals vs. Humans: Are They Different?,” “When Did Cavemen Live?,” and “Were Cavemen Real?”