Dr. David DeWitt responds to claims that the creation model is not scientific and does not make predictions.

In the historic debate between Ken Ham and Bill Nye, Nye insisted repeatedly that the creation model was not scientific and that it did not make predictions.  This was in spite of the several creationist predictions that Ken Ham had outlined in his opening statement. Though many more could have been given, this sampling should have sufficed. 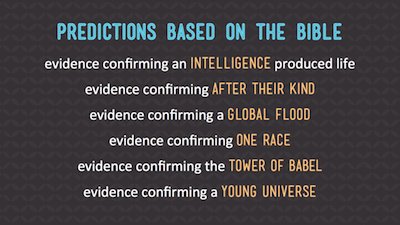 This is the predictions slide that Ken Ham put up on the screen during his debate with Bill Nye on Tuesday evening.

In a public debate, it is extremely difficult to give a very detailed explanation, so I am thankful for an opportunity to write an article detailing exactly how the creation model led me to make a specific creationist prediction in my own research which has been verified by results from evolutionists themselves.

Understanding the Creation Model and Predictions

First of all, it is important to recognize that in the vast majority of cases in science, creationists and evolutionists would make the same predictions.  For example, my major field of research is to understand the degenerative process of Alzheimer’s disease (see list of related articles). The trigger for the disease and how it unfolds is the same regardless of whether one is an evolutionist or creationist.  Indeed, in most operational science investigations, there will be no difference in expected outcome regardless of the origins views of the scientist.  This is why Dr. Damadian, who was shown on video at the debate (see the YouTube video), was able to invent the MRI: the physics works the same.  This is why Dr. Burgess was able to design the gearbox for a satellite.  This is why Dr. Fabich can do experiments on bacteria in mouse intestine.  This is why Dr. Faulkner can discover unique aspects about eclipsing binary stars.  The observational science works the same.

Second, the creation model, unlike evolutionary models, is very tightly constrained by Scripture that must be accounted for without wiggle room.  Ken Ham outlined some of these in his opening statement.  Some constraints include:

These constraints on the creation model are highly detailed, leave no room for change and are impossible to get around.  We have a defined timeline for which all of the different kinds of animals were made.  Evolutionists are not so constrained.  To demonstrate, a fun exercise is to do a google search for the term “fossil” with “older than previous.”  Such a search turns up millions of websites (many of these are duplicates) describing numerous fossils that are found “millions of years” earlier “than previously thought.”  So when evolutionists find a fossil in strata that they didn’t expect, they can just revise the date range.

This also happens when we find a living fossil like the coelacanth, which was thought to be extinct for millions of years—until we found some alive. I could wish that the creation model was not tightly constrained so that it could be flexible like evolution; however, that would not reveal God’s glory nor honor the more-than-adequate revelation He’s given us in His Word.

How to Make a Prediction in the Creation Model

Krings and colleagues reported the first successful DNA sequence from a Neanderthal in 1997.  In a truly amazing effort, they extracted and sequenced mitochondrial DNA (mtDNA) from a Neanderthal fossil.  This was unexpected because it was not known whether it could even be done.  The study made the cover of the scientific journal Cell with the headline:  “Neanderthals were not our ancestors.”  The authors claimed, based on the number of differences between Neanderthal and modern human mtDNA, that they could not be our ancestors.  They showed Neanderthal mtDNA had no closer relationship to modern European mtDNA than to Asian, African, or Australian.  Further, they contended that Neanderthals and modern humans last shared a common ancestor 550,000–690,000 years ago.1

At the time, I was teaching at Liberty University and one of my students presented this paper in class.  She wondered what to do with it because it appeared to contradict the creation model.  Indeed, since archaeological evidence showed that Neanderthals hunted and trapped prey, made musical instruments, used fire, and buried their dead with rituals, the Neanderthals must be descendants of Adam and Eve just like we are within the creation model.  I refused to accept the secular conclusions of the study because they clearly contradicted what the Bible teaches regarding the nature and origin of man.

Importantly, while my faith in the biblical account of creation caused me to doubt the conclusions of the scientific study, I was not content to leave it at that.  As a scientist, I needed to have evidence that I could use to contradict the reported conclusive results.  I could not just say, “Since the result doesn’t match the Bible, it is wrong.”  No, as a scientist, I was compelled to find out why the conclusion was wrong based on scientific data within the framework of the Bible’s claims.  Since I believed the Bible was true, it provided the motivation to pursue a study to show that Neanderthals really were descendants of Adam and Eve, even though this was counter to the secular scientific consensus at the time.

After additional Neanderthal mtDNA sequences were reported,4,5 it further confirmed our hypothesis.  The new Neanderthal mtDNA sequences had closer similarity to modern human mtDNA.  Now, with multiple Neanderthal samples instead of just one, it was also evident that the variation among Neanderthals themselves occurred at the same base pair locations where modern humans varied.  It had also been demonstrated that the majority of these differences occurred at what were considered mtDNA mutational hotspots.  This confirmed our conclusion that Neanderthals and modern humans did share a recent common gene pool.  I presented our research at the 2003 Answers in Genesis Creation Conference which is available online called “Did Neanderthals and Modern Humans Share a Common Gene Pool?”  At the time it was presented, it was very much against secular conclusions.

Over the next several years, my research focused on Alzheimer’s disease instead of Neanderthal genetics since I had received a research grant.  Others continued this type of Neanderthal research in much more detail than I did.  But in 2010, scientists reported the full genome sequence of Neanderthals.6  This was an incredible demonstration of scientific effort and deserves a great deal of credit.  Surprisingly (or not so surprisingly), when the full Neanderthal genome was reported, scientists noted remarkable overlap between Neanderthals and modern humans, found Neanderthal genes in modern humans indicating that we interbred, and found closer relationships to Eurasians—completely reversing the conclusions of the original report from 1997.

Surprisingly (or not so surprisingly), when the full Neanderthal genome was reported, scientists noted remarkable overlap between Neanderthals and modern humans.

The results came as a complete surprise to many evolutionists—but not to me (or other creationists who understood the creation model).  I had predicted it based on biblical creation assumptions.  I had obtained scientific data based on that prediction that rebutted the evolutionary claims to the contrary.  My prediction was counter to the secular scientific consensus at the time but consistent with the constraints of the biblical creation model.  Now, evolutionists have revised their theory and explanation to try to accommodate the results.  A creationist does not have that “luxury” because the creation model requires that Neanderthals and modern humans descended from Adam and Eve and therefore had to be related.

I want to be clear that I am not claiming credit for the Neanderthal genome sequence—that was excellent observational science by likely mostly evolutionists.  I do, however, want to illustrate how a scientist can make predictions within the biblical creationist framework, conduct a scientific investigation, and find evidence that confirms those predictions. My belief in the biblical account of creation provided the motivation to find the data and explain it more properly, which then confirmed the creation model.

As Christians, we should have the courage and conviction to believe that what the Bible says about creation is true. Then, when we encounter evidence that at first appears to support evolution, we will not doubt the Scripture. Instead, we will press on to figure out the flaws in the evolutionary argument. There have been numerous times in my life when I have been confronted with evidence for evolution that seemed really compelling, but if I struggled with it and waited, eventually I (or someone else) found the flaw. This reinforces my faith in the God who made the universe.

Dr. DeWitt is the Chair of the Department of Biology and Chemistry and the Director of the Center for Creation Studies at Liberty University where he teaches cell biology and courses on creation. He is the author of Unraveling the Origins Controversy.