Who’s who in the “Pit of Bones” at Atapuerca, Spain?

La Sima de los Huesos—the “Pit of Bones” in an Atapuerca cavern near Burgos in northern Spain—either by intention or accident became the final resting place for at least 28 of Europe’s earliest human inhabitants. But just what sort of human were they? Both who they were and when they lived has been a matter of dispute among evolutionists. Researchers led by Juan-Luis Arsuaga, who originally discovered this largest collection of human fossils in the world, now report the fossilized remains of these people reveal the early stages of Neanderthal evolution.

Resembling but not perfectly matching Neanderthals from other sites, the inhabitants of Sima de los Huesos have been identified by some as Homo heidelbergensis. Last year mitochondrial DNA analysis demonstrated their relationship to Denisovans, who are know by only scanty fossil evidence from faraway Siberia. This was a surprise to many, since the data suggested a closer relationship to the distant mysterious Denisovans than to known Neanderthals, whom they at least resembled.1

Now further analysis of the skeletal remains in the Pit of Bones shows the people in the cave should, based on their facial features, be classified as Neanderthals. They have determined that while the Sima skulls do not have features as robust as classical Neanderthals and have braincase shapes more like early non-Neanderthal human skulls from elsewhere, they should no longer be classified as Homo heidelbergensis.2 Because their braincases do not match those of other Neanderthals, Arsuaga and colleagues believe they have demonstrated that Neanderthals coexisted in several lineages in Europe. Most importantly, since they now consider the Sima people to be a less advanced form of Neanderthal, they believe they have confirmed that Neanderthals evolved by accumulating their distinctive features one by one at different rates. 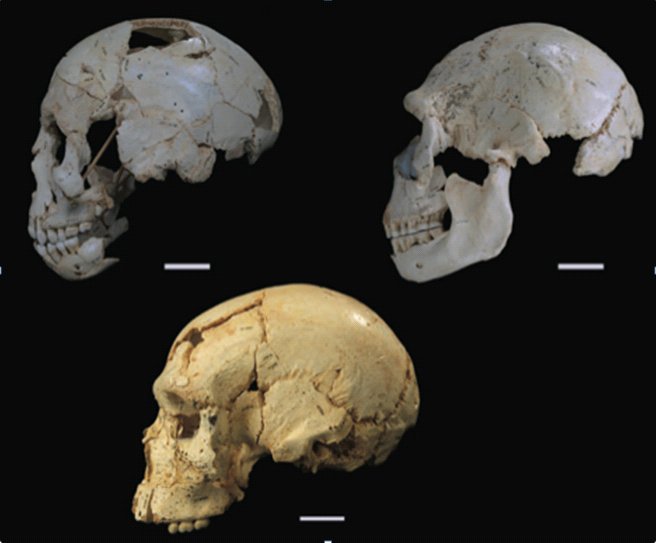 Here are three of the 17 reconstructed skulls from Sima de los Huesos. All are human. Their facial features are similar to but less robust than classical Neanderthals from other sites, and their braincases most strongly resemble those of “primitive” human fossils from Africa. Because of this mosaic of traits, evolutionary researchers place these people early in the evolutionary history of Neanderthals. Image by J. L. Arsuaga et al., via Science.3

It is uncertain whether the people were interred in the cavern or washed into it, but they share the cave with bones of various animals that washed into the cave, forming a number of sedimentary layers. The human fossils are only found in a couple of these layers, and the researchers believe, based on uranium series and paleomagnetic dating methods, that they were buried there about 430,000 years ago. (A study in 2007 dated the Sima human fossil beds at 600,0004 years but more recent studies, including molecular clock dating, have placed the date in the neighborhood of 400,000 years.)

Evolutionary anthropologists believe this represents a time early in Neanderthal evolution. They believe the facial features and teeth had evolved to fit the classical Neanderthal look but that the braincase still resembled that of more primitive ancestral humans from Africa. Evolutionary anthropologists believe early modern humans evolved in Africa and migrated to Europe where they met and interbred with Neanderthals. Modern humans still carry some DNA traceable to Neanderthals, but Neanderthals themselves are extinct, they say. Within the evolutionary timeline, then, the people of Sima de los Huesos would represent an early version of Neanderthal.

Seventeen skulls have now been identified and reconstructed from the nearly 7,000 fragmentary fossils. They are all very similar. The robust bony features of the jaw, associated with chewing, all appear like those of typical Neanderthals. Most of the skulls in the Sima collection have a brow ridge “closely approaching” but not matching that of other Neanderthals. Like other robust facial features classically associated with Neanderthals, it is somewhat less prominent in the individuals from Sima de los Huesos.

The people in Sima de los Huesos, like other Neanderthals, seemed to have made great use of the front teeth, as if they were a “third hand,” producing a great deal of wear on their incisors. (My dentist would cringe; he prefers I just use my teeth on food. But consider that many aboriginal people in the modern world likewise use their teeth as a spare tool, one that might wear out but is never misplaced.)

The greatest difference between the Sima de los Huesos people and other Neanderthals involves the braincase. Cranial capacity averages 1232 cubic centimeters, which is a bit smaller than other Neanderthals and early modern humans but larger than Homo erectus. Normal human cranial capacity covers a wide range, so this figure is well within the norm for humans, which is just a little smaller than typical Neanderthals. Some of the landmarks on the individual skull bones, particularly those that form the braincase are more like those of more “primitive humans”5 than the shapes typical of Neanderthals.

“We think based on the morphology that the Sima people were part of the Neanderthal clade," Arsuaga said, "although not necessarily direct ancestors to the classic Neanderthals." Arsuaga and colleagues believe their analysis of the Sima de los Huesos skulls fulfills the predictions of the “accretion model hypothesis,” which holds that Neanderthals did not just appear on the evolutionary scene with all their unique features in place but rather accumulated them gradually over eons. “For decades the nature of the evolutionary process that gave rise to Neanderthals has been discussed,” explains Martínez. “An important question in these debates was whether the ‘neandertalization process’ involved all regions of the skull from the beginning, or if, on the contrary, there were various stages in this process that affected different parts of the skull at different times.”

Evolutionary anthropologists assume that humans gradually evolved from ape-like ancestors and through a series of progressively less primitive human forms.

Evolutionary anthropologists assume that humans gradually evolved from ape-like ancestors and through a series of progressively less primitive human forms. They assume that hundreds of thousands of years elapsed between the evolutionary advent of various Homo species. Geneticists have learned that ancient people like Neanderthals, Denisovans, and the people of Sima de los Huesos have complex interrelationships with each other, relationships that have left their genetic footprint in modern human DNA.

The dates assigned to these various ancient peoples through various dating methods—whether radiometric, paleomagnetic, molecular clocks, or otherwise—are based on worldview-dependent interpretations of measurable data and a great deal of circular reasoning. In other words, they depend on the presumption that molecules-to-man evolution of life over millions of years actually occurred. (Countless articles on this website deal with both the scientific and biblical problems with these claims.)

While evolutionary anthropologists try to fit the apparent Neanderthal/primitive human “mosaic” of the people in Sima de los Huesos into their preconceived notions, they ignore the historical position for which there is biblical support. Once we realize that the only eyewitness account of our origins is contained in the God’s Word and that the Bible also gives a true account of the global Flood as well as the subsequent dispersion from the Tower of Babel, the historical place of people like those entombed in this cave in northern Spain makes sense.

The evolutionists involved in the analysis of the people in Sima de los Huesos were delighted to find their discoveries fulfilled the predictions of the evolutionary “accretion model hypothesis.” However, this model and their interpretations are equally based on the presumptions in their evolutionary worldview. When the findings are viewed from the biblical worldview—which is based on the history provided by God in the Bible, especially in Genesis—it is easy to see that these differences are not evidence of evolution but rather of variation within mankind.

You can read more about how the overlap in Neanderthal and modern human genomes fits predictions based on the biblical Creation Model in “Does the Creation Model Make Predictions? Absolutely!” by Liberty University neuroscientist Dr. David DeWitt. Any discovery (whether in genes or fossils) that Neanderthals, other archaic humans, and modern humans share many of their characteristics and seem to even be mosaics of one another is not surprising since they all are related to Adam and Eve and also to Noah and his family.

From a Biblical Perspective

After the global Flood of Noah’s time, about 4,350 years ago, the human population, which had begun around 1,700 years earlier with Adam and Eve, was whittled down to 8 people. Their descendants eventually dispersed from Babel. Though they were all related, once they became isolated and in some cases reduced to small groups, distinctive traits would have emerged—characteristics that we now associate with the fossils of various “archaic” (i.e. ancient and extinct) people, who were nevertheless fully human. Just as people all over the world today exhibit a great variety in their appearance, so groups of people isolated in the centuries after the Flood and the Babel dispersion would have developed characteristics that anthropologists now analyze in their fossils.

It is no surprise that some groups—like those at Sima de los Huesos—display some but not all characteristics of other groups including the more “classical” Nenaderthals and other groups of humans found elsewhere. Why? Because they were all descended from the 8 people that disembarked from Noah’s ark after the global Flood, about 4,350 years ago. The “mosaic” of traits in these people who left their fossilized remains in Ice Age sediment is consistent with the history found in God’s Word.

Previous Article Does a Paleo-Diet Hold the Evolutionary Key for Good Nutrition? Next Article Did Bugs Give Ancestral Primates a Bigger Brain?