Does a Paleo-Diet Hold the Evolutionary Key for Good Nutrition?

Do modern man’s diseases spring from a mismatch between today’s diet and prehistoric anatomy?

Highly processed foods—those stripped of nutritious components and full of sweets, fats, and empty calories—are associated with many prevalent health problems that haunt modern “developed” countries. But is that because evolution failed to equip us for such foods? After all, “cavemen” didn’t eat pizza, crispy fried chicken tenders, French fries, cake, milkshakes, and candy bars. Could our “evolutionary past” dictate our optimal diet?

Evolutionists believe our bodies evolved to fit a pre-agricultural hunter-gatherer’s diet. Some believe a return to a caveman’s paleo-diet1 would make us into the healthier people evolution equipped us to be. They advocate “evolutionary medicine,” believing “many modern nutritional disorders relate to the mismatch between the diet to which we have evolved, and relatively newer agricultural-based ‘Neolithic diets.’”2 Others suspect we have evolved beyond our Paleolithic past in more than just brainpower, distancing us biologically from our ancestors and rendering their diet irrelevant to modern health.

Plotting our presumably long Paleolithic climb down from the trees and up the evolutionary ladder from 2.5 million until about 10,000 years ago, evolutionists presume evolving post-Paleolithic humans invented agriculture and began eating grains and dairy products. Pre-agricultural humans would, evolutionists believe, have not used dairy products and therefore would not have evolved digestive systems able to digest lactose. Nor would they have consumed grain. So what would a Paleolithic “caveman’s” diet consist of? Versions vary, but generally such diets are grain-free, sugar-free, pasta-free, fried-free, dairy-free, and in some cases bean-free. On a Paleo-diet, if you could kill it, catch it, pick it, or dig it up, then you can eat it.3 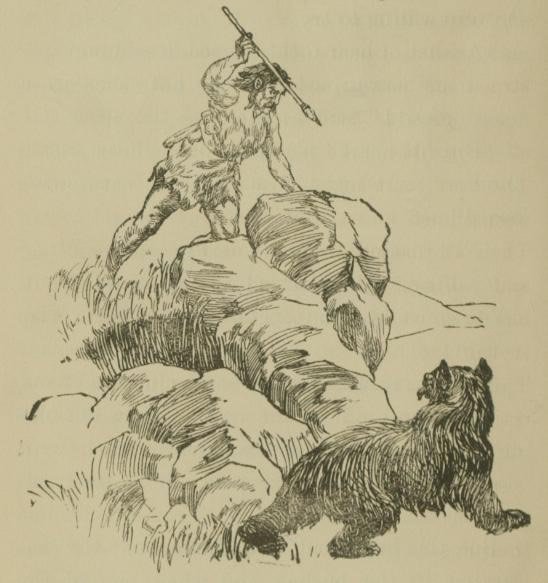 Paleo-diets consisting of meats and foods that could be gathered are promoted as the evolutionary answer to modern diet-related health concerns. The caveman-diet is based on the idea that “evolution knows best,” presuming man evolved by eating meat and went downhill after starting to grow things. Image by Sherurcij, via Wikimedia Commons.

The “evidence” for these developments is all presumption-dependent. Anthropologists assume that humans evolved from ape-like ancestors, that the human brain evolved when ancestral hands were bipedally freed for higher pursuits, and that the whole process took a couple of million years. We regularly discuss the innumerable scientific difficulties with every aspect of these claims as well as the fact that this version of human history rejects our Creator’s eyewitness account of who and what we really are.

Even the evolutionary presumption that human ancestors had to subsist as hunter-gatherers before evolving enough brains to farm and raise animals is completely at odds with the biblical account of human history. Not only did man begin his life-beyond-Eden as a tiller of the ground (Genesis 3:17–18), but after the global Flood, farming began right away. Noah planted a vineyard (Genesis 9:20).

Hunting would have had to wait a while, as the animals aboard the Ark—preserved to replenish the earth—needed time to establish themselves and reproduce. The first hunter mentioned in the Bible was Nimrod (Genesis 10:9), Noah’s great-grandson. Following the dispersion from the Tower of Babel, hunting and gathering likely became a prominent part of many cultures as people migrated, lost agricultural expertise, and had to regain it. Often it is easier to survive as hunters and gatherers in an undeveloped land before establishing an agricultural base.

There is certainly no biblical reason to suppose that either the farmer or the hunter-gatherer would be the intellectual superior of the other, much less the idea that a hunter-gatherer’s diet would be more natural for us!

Even among those who buy into the claims of evolutionary anthropology, BBC journalist Claudia Hammond, in her featured analysis of paleo-diets, notes that its advantages in the modern world are up for debate. Naturally, any improvement over a junk-food diet—a-lá-caveman or otherwise—would come out on top in an actual study. But there has been some effort to compare a supposed “paleo-diet” to a basic common-sense healthy high-fiber, low-fat diet. The paleo-diet has not produced significantly better long-term results, and in some studies the recommended minerals and fiber have been difficult to attain with caveman cuisine.

Evolutionary anthropologists imagine our dietary past, but supporting that story with evidence . . . is difficult.

Evolutionary anthropologists imagine our dietary past, but supporting that story with evidence—even within the evolutionary model—is difficult. First of all, the evidence for just what that diet was and how it eventually changed is not as quantifiable as many think. For instance, a review2 of the archaeological evidence for Paleolithic and Neolithic diets, published in the European Journal of Clinical Nutrition in 2002, notes that the correlation between jaw size and the primate ancestral move from raw plants to a more nutrient-dense meat diet is debatable and the archaeological evidence weak. Isotopic studies of Neanderthal bones have shown that animal proteins were a significant part of their diets,4 but recent studies of Neanderthal teeth also show they ate cooked starches and even used herbs. Tools suitable for hunting and butchering are commonly found associated with various sorts of “early” humans. Nevertheless, there is no way to know whether various “cavemen” had a steady intake of meat or had to rely more on other sources of calories.

Of course in truth, evolution did not bring early humans like Homo erectus and Neanderthals into existence; these were simply human beings subsisting on the available resources. Further, we understand that the transitions into and out of agricultural lifestyles can be explained by documented biblical history apart from any evolutionary stories.

Evolutionist Marlene Zuk, author of the book Paleofantasy, does not believe paleo-history should influence our nutritional choices. She contends that the many genetic changes in the course of human evolution have rendered such considerations irrelevant. Believing in molecules-to-man evolution, Zuk says, “Some of those genes we had back in the Pleistocene were the same as the genes we had when life was aquatic, and no one’s suggesting we start filter feeding.”

While we share no ancestry with fish and even the common claims that humans are “still evolving” deceptively mix terminology, there are documented changes in human tolerance for certain foods that shed light on the relevance of our ancestors’ diets for us, apart from evolutionary claims.

A great example is the ability to tolerate milk—particularly the lactose (“milk sugar”) in it. Humans are born with the genetic information to allow them to make the enzyme lactase to digest milk, which is a very good thing considering we depend upon milk in infancy. It is generally accepted that the gene encoding lactase would be ordinarily switched off as a person grows up, making them somewhat lactose intolerant. However, in many populations a variation disabling the “off-switch” for this gene is widespread, making lactose tolerance (“lactase persistence”) the norm for them.

We have however no way of knowing when people began using dairy products. Abraham ate dairy (Genesis 18:8) just a few centuries after the global Flood, and archaeology confirms dairy residue in the pots of Pleistocene people. However, if lactose intolerance was once the norm, then lactase persistence—the ability to still digest milk after infancy—may have been selectively favored in populations relying heavily on dairy resources.

Lactase persistence has nothing to do with molecules-to-man evolution or ape-to-human evolution or even information-adding evolution. It is just a switched-on variation within the human genome. The only reasonable health-related criterion for whether lactose-tolerant healthy people should consume dairy products is the balance of their benefits and potential problems in the present. Even that question must be individualized according to the people and particular products involved. Many people today tolerate dairy products and profit from the rich nutritional resources they contain, so it would be foolish to recommend excluding them just because the “more ancestral” human condition may have been lactose intolerance.

Man did not evolve through a series of ape-like ancestors, but humans have throughout history adapted to the edible resources wherever they lived. Events may selectively favor people best able to subsist on available edibles, but that is adaptability, not evolution. Highly processed foods are not good nutritional choices, but that fact has nothing to do with evolutionary history.

The Bible tells us that God directed humans and animals to eat only plant products from the beginning. The Bible does not say that meat would have been unhealthy or poorly tolerated but instead pictures a perfect world without death. Adam’s family as described in Genesis was familiar with agriculture. Though we cannot know whether or not pre-Flood people disobediently began to eat animals, God gave permission (Genesis 9:3) for people to consume meat following the global Flood. Was this a concession to the altered availability of quality plant products in the post-Flood world? Would we be better off meatless today?

This question is debated by many people from many points of view. See “What Would Jesus Eat?” by internal medicine physician Dr. Tommy Mitchell to learn more about this issue. As Dr. Mitchell points out, if God—our all-wise Creator—deemed vegetarianism the proper course for post-Flood mankind, He could have commanded it. He did not.

Vegetarianism is a personal choice available to those who determine that it is best for their bodies or personal sensibilities. It is neither commanded by Scripture nor demanded by the bodies of most people. There is no more need to return to the diet of the Garden of Eden than to the diet supposedly consumed by Paleolithic hunter-gatherers.

The optimal dietary plan for individuals, people groups, and humans in general is far more complex at a biochemical and physiologic level than anyone’s version of a “paleo-diet” or even a “return-to-Eden-diet” could ever encompass. Throughout history various cultural groups have adapted to available resources, but that has nothing to do with tales of human evolution from an ape-man past. Nutritional and medical advice should not depend on evolutionary presumptions but on properly conducted medical research in the present.

This information is intended for general education purposes only and is not intended as professional medical advice. The information should not be relied upon as a substitute for medical advice from your doctor or other healthcare professional. If you have specific questions about any medical condition, diagnosis, or treatment, you should consult your doctor or other healthcare provider.