by Dr. Danny R. Faulkner on May 22, 2019
Featured in Answers in Depth
Share:
Email Using:
Gmail Yahoo! Outlook Other

From time to time there are news stories of the latest findings in astronomy that are a bit sensationalized and hence are misrepresented. For instance, it seems that a couple of times a year there are reports of astronomers witnessing the birth of a star, as if the star weren’t there last week but is this week. In reality, the star was there all along. It’s just that astronomers recently have observed it and decided that it matches their expectations of what a newly born star, say in the last million years or so, ought to look like. A case in point is the recent announcement of the discovery of helium hydride in space, the first molecule purported to have formed in the universe. Press accounts suggested that astronomers had discovered the molecules that first formed only a hundred thousand years after the big bang and have survived the 13.8 billion years since. However, the situation is a bit murkier than that.

As nearly everyone knows, most substances consist of compounds, the chemical bond of two or more different kinds of elements. While the basic unit of an element is an atom, the basic unit of a compound is a molecule. The best-known example of a molecule is water, H2O, meaning that a molecule of water consists of two atoms of hydrogen bonded to a single atom of oxygen. The molecule in question here is helium hydride, HeH+. The plus sign indicates that this molecule is a positive ion, a molecule with a net positive charge. This electrical imbalance is due to the molecule having three positive charges from its three protons, but only two negative charges from its two electrons. Because of their electoral imbalance, ions are unstable, so they normally react with other substances to form electrically neutral molecules. Because it is so reactive, helium hydride doesn’t exist naturally on earth, and it wasn’t produced artificially until 1925. Even today, helium hydride is so reactive that it cannot be produced in large quantities or stored in bulk. However, conditions in space are very different. The densities that exist in space are far lower than we can produce in the hardest vacuums on earth. Under these circumstances, the average distance between particles is very great, so the probability of collisions is extremely low. Therefore, normally reactive particles, such as helium hydride ions, have little chance of reaction and so can exist for a long time.

Molecules are thought to play an important role in the formation of stars, hence the keen interest in finding molecules in the ISM.

This latter point brings up the significance of finding helium hydride in space. According to the big bang model, the universe began in an expanding, very dense, hot state 13.8 billion years ago. The only elements produced in the big bang were hydrogen, helium, and a trifling amount of lithium. Helium is chemically inert, making it very difficult to form any chemical bonds, even with itself. Hydrogen is reactive, often reacting with itself to form diatomic hydrogen, H2. But diatomic hydrogen can’t form entirely by itself: it requires assistance, such as on the surfaces of dust grains. Lithium doesn’t bond with helium. Lithium can bond with hydrogen to form lithium hydride, LiH, but this process requires diatomic hydrogen to first exist, so if no diatomic hydrogen exists, lithium hydride can’t form. This exhausts the survey of what was available in the early big bang universe. Since in the early universe hydrogen had nothing to assist it in forming molecules, how did the first molecules in the universe come to be? Today there is plenty of dust to help, but where did that dust come from? Dust is made of elements heavier than lithium, such as oxygen, silicon, and iron, but where did those atoms come from? According to evolutionary theories of astronomy, those atoms were forged in stars, stars that spilled the products of this nucleosynthesis into space, from which the dust particles formed. Here is the rub: without stars, dust could not exist in the early universe, and with no dust, no molecules could form, and without dust or molecules, stars could not form, so how did this process get started?

Helium hydride is the rescuing device. In the early big bang universe, it was too hot for any atoms to exist, so there simply were the nuclei of hydrogen, helium, and lithium atoms immersed in a sea of electrons. As the universe expanded and cooled, helium nuclei acquired single electrons to form ionized atoms, then they acquired another electron to become stable atoms. A similar thing happened to the lithium nuclei, but they aren’t important to the story. Eventually, the hydrogen nuclei acquired electrons to become stable atoms. But before that, some hydrogen nuclei bonded to helium atoms to form helium hydride. Here is the reaction: 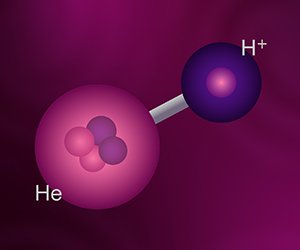 It was the presence of these first molecules that allowed diatomic hydrogen to form by the following reaction:

The helium hydride is consumed in the process. Diatomic hydrogen is stable, and it supposedly assisted in forming the first stars, from which the rest of the evolutionary story unfolds. Hence, the significance of the recent discovery of helium hydride in space.

astronomers have thought that the conditions in planetary nebulae might be conducive to production of helium hydride, with temperatures and densities high enough to mimic the conditions during the first hundred-thousand years of the big bang universe 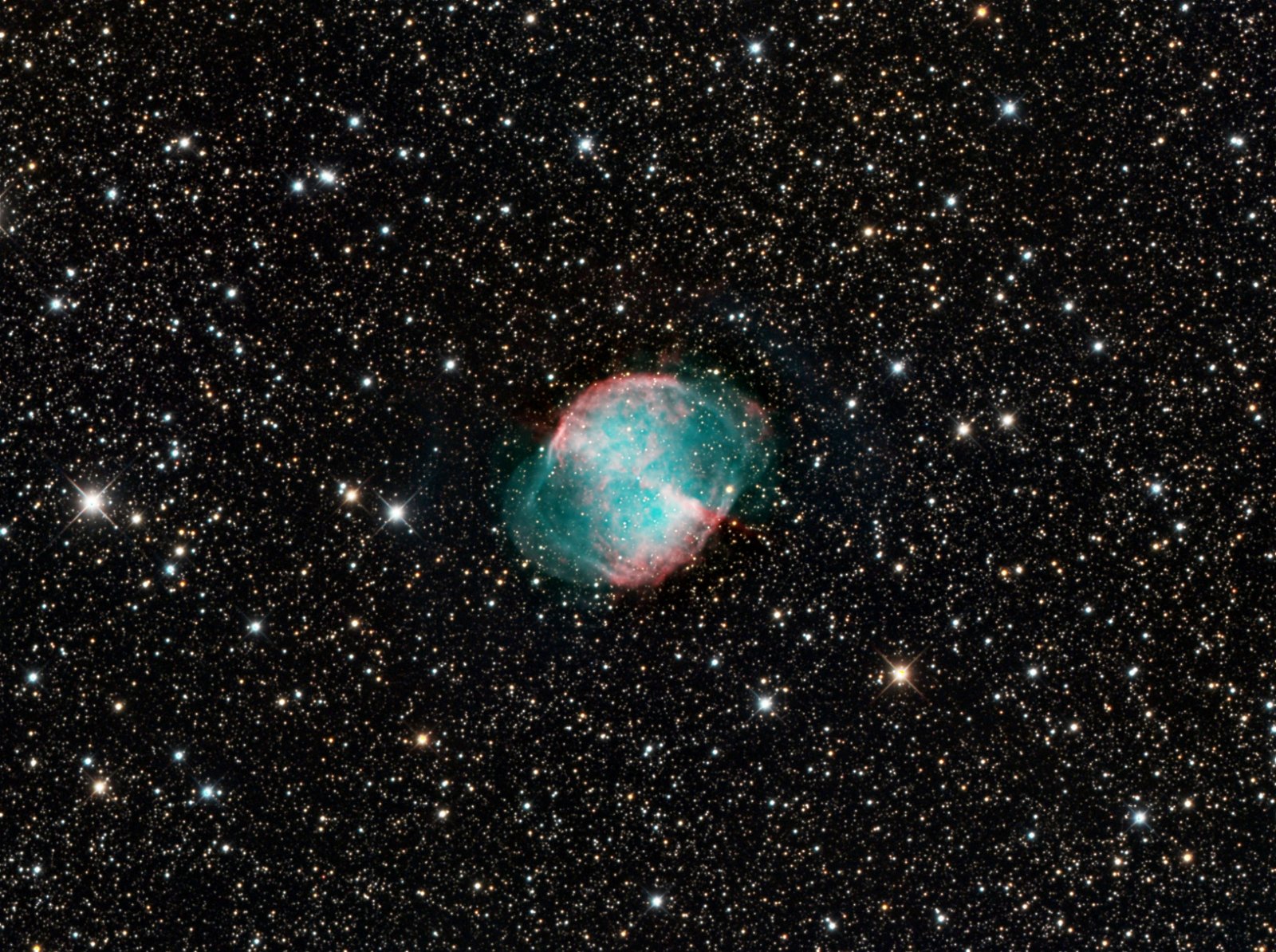 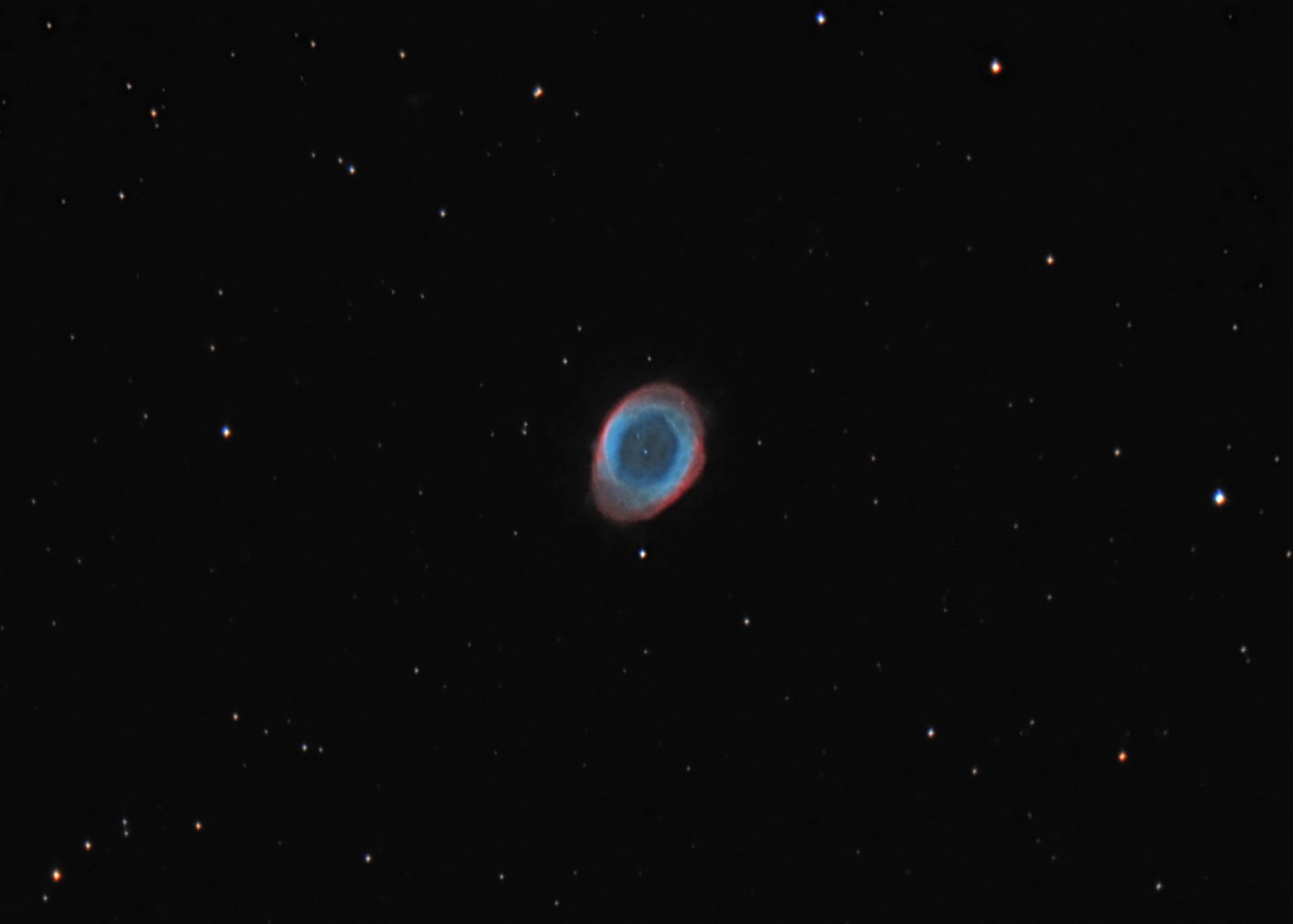 The planetary nebula that was the subject of this study is NGC 7027 pictured below. NGC 7027 is approximately 3,000 light years away and is thought to be about 600 years old. The astronomers used the GREAT (German REceiver for Astronomy at Terahertz frequencies) spectrometer aboard SOFIA (Stratospheric Observatory For Infrared Astronomy), a 2.5-meter infrared telescope mounted in a retrofitted Boeing 747. SOFIA routinely flies missions above 40,000 feet to avoid water vapor that is lower in the earth’s atmosphere (water vapor greatly interferes with infrared observations). This study measured emission lines from a rotational ground state transition1 in helium hydride in NGC 7027. There had been some possible detections of helium hydride in the ISM going back four decades, but this recent study was the first clear evidence of helium hydride in space. 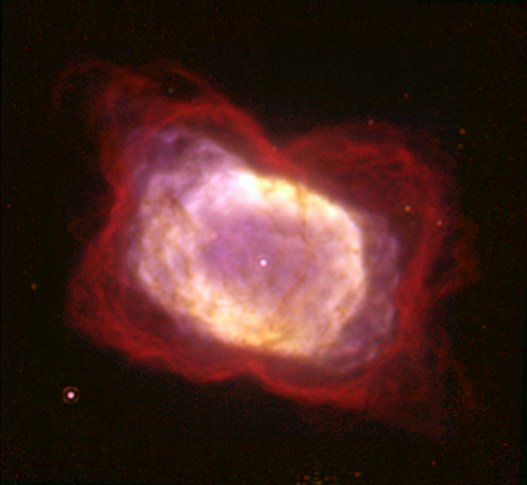 Let me recap: This study produced the first unambiguous detection of helium hydride in space. Helium hydride is believed to be the first molecule to have formed in the big bang universe. The formation of this molecule is important to the big bang model, because it was a crucial step in the development of molecular hydrogen, which in turn was a critical step in the formation of the first stars. Without these steps, it is doubtful that the universe would have evolved the way that evolutionary astronomers believe it did. Therefore, the detection of helium hydride is thought to be significant in establishing the credibility of this evolutionary scenario. Keep in mind that no one believes that the detected helium hydride is primordial; rather, this helium hydride is thought to have originated in the past few centuries. And it is unlikely that this helium hydride will survive for long, for it soon will react with hydrogen atoms to form hydrogen molecules. Consequently, this study doesn’t amount to that much. This is particularly true for biblical creationists, who reject the big bang model.