Beautiful Barbary lion, now extinct, could be “re-built” and restored from its closest cousins.

Modern lions—whether extant or extinct—developed from a common ancestral lion, researchers reported this week in BioMedCentral: Evolutionary Biology. Lions once ranged throughout Africa to northern Europe, the Middle East and Asia, and even Central America.1 A team led by Ross Barnett analyzed mitochondrial DNA from museum specimens representing extinct and extant subspecies of lions. They concluded that all subspecies of Panthera leo seemed to have diverged from an Eastern or Southern African ancestral lion.

Barnett, formerly of Durham University, UK, obtained DNA from the skulls of two lions from the medieval Tower of London, which once housed a menagerie. Those skulls belonged to a now extinct subspecies, the Barbary lion, and were found in the 1930s in the moat, which was once used as a dumping ground for Tower refuse. Additional Barbary lion specimens from other places were also used in the study.

Barbary lions, also called Atlas lions, are considered the most spectacular of the lions in appearance. The males had majestic manes that were particularly long and dark, though modern research has suggested this trait was environmentally influenced. Their skulls were comparatively pointed, the muzzle narrow, and eyes were reportedly a different color than varieties alive today. 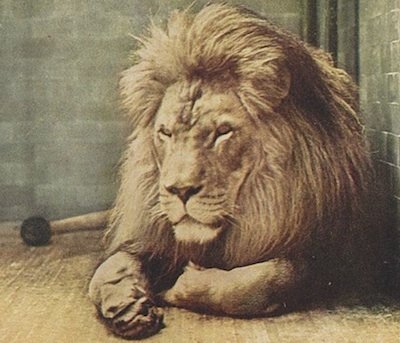 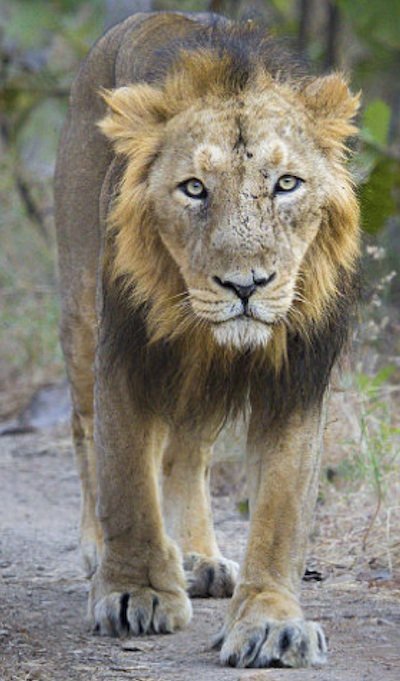 The male Asiatic lion of the endangered subspecies Panthera leo persica survives in a population of only about 400 on India’s Kathiawar Peninsula. Despite morphological differences with African lions—scantier manes, variations in the shape and openings in the skull, smaller size, and a longitudinal fold of skin under belly—the Asiatic lion genetically appears to be the closest cousin of the extinct Barbary lion. Image: Sumeet Moghe through Wikipedia

The Barbary lion’s native habitat once spanned North Africa from Egypt to Morocco, hence the name. (This stretch of North Africa was once known as the Barbary Coast.) They were a major predator in the region and unlike other lions did not hunt in prides. Countless Barbary lions fought gladiators in ancient Rome’s Coliseum. Populations continued to dwindle through the centuries of human competition from the Arab empire and the European hunter, and they are believed despite anecdotal reports to the contrary to have become extinct in the wild in 1922. Mitochondrial DNA from lions thought to be Barbary lions in the Moroccan Royal Menagerie did not match the Barbary lion specimens in the study, showing that there is at least no maternal relationship between those lions and known specimens.2 Therefore the Barbary lion is likely extinct in captivity too.

Drawn from museum specimens, the extinct Iranian (Persian) lion was also represented in the samples sequenced. So were the endangered Asiatic lions of India’s Kathiawar Peninsula, which appear to be the same subspecies as the Iranian lion.

Despite the distance between the native habitats of these lions, the researchers found the Barbary, Iranian, and Indian lions had much more in common with each other than expected. In fact, the North African Barbary lion had more in common with these Asian lions than with sub-Saharan lions from other parts of Africa.

“The extinct North African Barbary lion and the Asian lion (including the extinct Middle Eastern population) clearly form a mitochondrial group that is distinct from all sub-Saharan African lions,”3 Barnett’s team reports. They found this surprising but note that their result could have implications for conservationists interested in trying to reconstruct the particularly striking but sadly extinct Barbary lion from its closest cousins.

“Lion populations in West Africa and Central Africa, which have drastically declined over the past few decades,” Barnett explains, “are actually more closely related to the Indian lion than to lions in, say, Somalia or Botswana.” Conservationists may try to reestablish lion populations in areas where they are extinct. “Understanding the demographic history of a population is critical to conservation,” he says. “If you think of lion diversity as two distinct branches then the regions where lions are doing ok, in Eastern and Southern Africa, reflect only half the total diversity. The other half is represented by the diversity in India, West Africa, and Central Africa. If the West and Central African populations were to slip away, that whole branch would only survive in the tiny Indian lion population.”

The close kinship in lions has parallels in tigers". “In the tiger, another charismatic felid species, studies of ancient mitochondrial DNA have suggested a close relationship between the extinct central Asian Caspian tiger and the extant Amur tiger,” Barnett writes. “This has allowed conservationists to discuss the translocation of Amur tiger stock to occupy the former range of the Caspian tiger with support from the World Tiger Summit. Similarly, if no examples of purebred Barbary lions can be found within the zoo population, there might be scope for restoration of the North African lion population using the closely related Indian lion.”

Animals reproduce and vary within their created kinds, producing many species and varieties, but they are never observed evolving into different “kinds.”

The discovery that all the modern subspecies of lion are closely related, in light of biblical history, is not at all surprising. God created all kind of animals about 6,000 years ago according to God’s eyewitness account recorded for us in his Word. Biology confirms biblical history, for animals reproduce and vary within their created kinds, producing many species and varieties, but they are never observed evolving into different “kinds.” For many animals it appears that the “kind” is taxonomically at the “family” level, sometimes producing some unexpected hybrids. All animals alive today as well as many extinct ones are varieties that developed within the descendants of the animal kinds that were preserved on Noah’s ark.

Dr. Jean Lightner, a doctor of veterinary medicine who also teaches at Liberty University and is actively involved in research, comments:

Lions belong to the cat kind, which also includes tigers, cougars, and house cats.  God provided them with the means to spread out and inhabit the earth.  While genetic changes do accumulate as they do so, these are not the type of changes that evolutionists require to support their idea of molecules-to-man evolution.4

Diversity Developed since the Global Flood

Based on molecular clock estimates, the researchers report that lions diverged into subspecies 124,000 years ago. “Additional analyses of ancient DNA from historical examples of modern lions suggest that sub-Saharan Africa, with a tentatively identified focal point in eastern-southern Africa, was the likely evolutionary cradle of the modern lion,”5 they write. They calculate that lions began leaving North Africa about 21,000 years ago, seeding India’s lion population, and again about 5,000 years ago, to produce the now-extinct Iranian lion.

What about the divergence dates—124,000 years and so forth—that the researchers reported? God’s Word indicates the world is only about 6,000 years old, and the global Flood was less than 4,500 years ago. Either the divergence dates are wrong or the Bible is. It turns out that these large figures are based not on actual observable mutation rates in felines but on molecular clock data rooted in the assumptions of molecules-to-man evolution. Commenting on these inflated divergence dates, Dr. Lightner explains:

This is an example of historical science.  Using data from a variety of sources in the present, a natural history of lions is inferred.  Much of the natural history may be reasonably correct, as this is tracked using minor genetic changes within a single species.  However, creationists would contest the dates ascribed to these historical events.

The authors of the research article did not use empirically measured mutation rates.  Instead, as they clearly state in the paper, they calibrated their “molecular clock” by using estimates based on evolutionary inferences and dating.

It is interesting to note that in cases where we do have measured mutation rates, the data fits well in the creation paradigm rather than the evolutionary one.6

Read more about it in “New Genetic-Clock Research Challenges Millions of Years.”

While nothing in this study directly concerns molecules-to-man evolution, molecular clock data rooted in those evolutionary assumptions is used to establish divergence dates rather than mutation rates based on objective scientific observation. Molecular clock dates are built on a stack of molecules-to-man evolutionary presuppositions and calibrated in accord with dates drawn from dating methods dependent upon additional unverifiable worldview-based assumptions. Therefore the divergence dates calculated in the study should be disregarded.

All these lion subspecies are cats. In fact, baraminological analysis suggests that all cats—lions, tigers, cheetahs, and tabbies—are in the same kind. There are 14 genera and around 40 species of cats. In her review “Mammalian Ark Kinds,” Dr. Lightner reports, “Because of extensive hybrid data that crosses the two recognized subfamilies [Felinae and Pantherinae, extant subfamilies of the Felidae family] and a strong cognitum [easily perceived common characteristics 7], it is natural to place the level of the kind at the family.”

Biological observations are consistent with biblical history. Therefore it is no surprise to find that all the testable subfamilies of lions are related. The pattern of their “closeness” may reflect their ancestors’ migratory history and even the geographical barriers that formed to isolate groups from one another in the post-Flood years. But the true ancestors of all animals in the cat family got off the Ark with Noah. And those ancestors were? You guessed it. Cats!