No Kind Left Behind

Recounting the Animals on the Ark

We’ve all seen images of giraffes, zebras, and elephants boarding Noah’s Ark. But what did Noah’s floating zoo really look like? The answer is sure to surprise us … and to remind us that there’s much more to the Ark than we ever imagined.

Imagine gathering all the kinds of land animals that ever lived into one place. What a zoo that would be! Recently, Answers in Genesis began work on its Ark Encounter outreach project, to build a full-sized Ark and populate it with a sampling of the animals that Noah may have brought on board. Which animals were there? How many?

Helping to find the answer is this paleontologist’s dream come true. Such a project requires gathering data on every kind of creature ever discovered, sifting through the list, and calculating which ones showed up at Noah’s door. In addition to rabbits, elephants, and tigers, most creationists now recognize that dinosaurs must have tromped onboard the Ark, along with flying pterosaurs. A few enterprising artists have shown kangaroos, lemurs, birds of paradise, and even saber-toothed cats and mammoths. But what about all the other unbelievable beasts in the fossil record?

Few people realize just how many bizarre-looking creatures once made earth their home—boomerang-headed amphibians; car-sized reptiles that ate plants; and giant, horned, elephant-sized mammals that look like beasts from Tolkien’s The Lord of the Rings. These are just some of the amazing creatures known to paleontologists but little-known to the general public. These and many other extinct animals belong to “kinds” completely different from anything living today.

Did Noah have to make room for all these creatures, too? After all, every kind of air-breathing land animal had to be on the Ark. No matter how rare an animal is, a representative of its kind had to board the Ark. Yet how could they fit, especially since the number of named animal species, living and extinct, exceeds one million?

The first step is to examine the Bible to see what instructions God gave to Noah concerning animals and the Ark. Only “living creatures” (Hebrew: nephesh) were to be brought on the Ark (Genesis 6:19–20; 7:2–3; 7:8–9). That excludes plants, bacteria, and fungi. The only plants brought on board the Ark were used for food. All other plants were presumably left outside.

Noah did not need to build an aquarium for the Ark!

Also excluded were fish and other aquatic organisms. After all, Noah did not need to build an aquarium for the Ark!

Drawing the Line for Ark Kinds

Over one million animal species have been named, but it’s a mistake to assume all were on the Ark. The Bible says Noah took only air-breathing land animals. So that excludes sea creatures and possibly insects and other invertebrates. Of the land vertebrates, there are only around 33,000 named living species (and a few thousand more fossil species). These are divided into fewer than 10,000 genera and 1,000 families.

So how many kinds of animals were on the Ark? The answer depends on which modern taxonomic level—order, family, genus, or species—represents each original “kind.” A 1996 study assumed the genus, but the new Ark Encounter is evaluating each family. 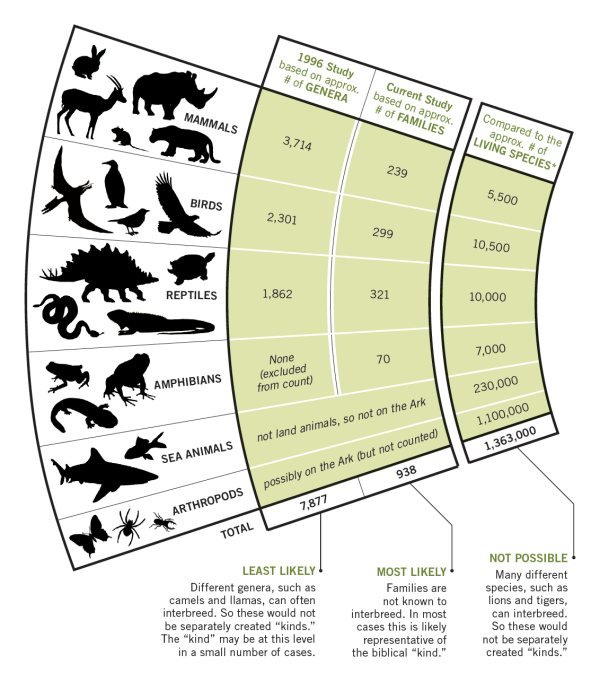 *What About Fossil Species?

The various studies of “kinds” have included fossil creatures in their lists of “families” and “genera.” Determining the number of fossil species is much more difficult. Since vertebrate fossils are often incomplete, there may not be enough material to identify the specimen as a new species of a known genus. Or, the physical differences may simply represent variations within one species, rather than differences between two species.

Even without bacteria, fungi, plants, and sea creatures on the Ark, lots of species remain to be accounted for. The key is to understand the word used in Scripture: kind (Hebrew: min). The Bible does not say God brought every individual or every species to Noah, since species is a modern concept. Instead, He brought a male and female of every “kind” (and seven of the clean animals).2

Over the centuries, there have been several estimates on the numbers and types of animals brought aboard Noah’s Ark. The first significant attempt was by the French mathematician Johannes Buteo (ca. 1492–1564).3 He went through all known animals, including the ones known from newly discovered North and South America. He estimated about 100 total “kinds,” or 300 individuals (along with 3,650 sheep to feed the carnivores on the ship). These were all mammals because he did not think it necessary to count reptiles and birds separately, which could more easily find space. (He didn’t know about dinosaurs!)

Our understanding of biology has grown steadily over the centuries, leading us closer to the true number. We now know more about the full diversity of land animals, for instance. We have also learned that many species may belong to the same kind. If species can interbreed and produce hybrids, it is assumed that they descended from a pair of animals on the Ark that could interbreed.

For instance, big cats like lions and tigers can be interbred with each other, creating hybrid “ligers” and “tigons.” Indeed, it appears that all members of the cat family (Felidae) may be connected through a series of hybrid pairings that ultimately connects different cat species to each other. In such cases, it seems that only one original “kind” onboard the Ark produced all of these species. So if “kind” is above species, where does it lie in our modern taxonomy?

One of the most important studies among young-earth creationists was by John Woodmorappe in his technical book Noah’s Ark: A Feasibility Study.4 For the sake of argument, he chose the taxonomic rank just above the species—the genus. On this basis, he estimated that approximately 16,000 terrestrial vertebrate animals (consisting of nearly 8,000 genera of reptiles, mammals, and birds) were on board. However, Woodmorappe considered this a deliberate and huge overestimation, since he suspected that the “kind” was broader than the genus.5 Newer studies have indicated that “kinds” were generally at the level of family.6

When Answers in Genesis decided to move forward with the Ark Encounter project, they needed to take another look at the “Ark kinds.” Partnering with other creation scientists, the Ark Encounter team is working toward a full tally and description of the “kinds” likely represented on the Ark.

In 2011, the initial team of creationists published an article detailing the approach they would take.7 The team will rely on all the best available scientific methods and evidences, including breeding records and statistical studies. Based on past studies, the team recognized that the taxonomic rank of family is the closest representation of the “kind.” This is not to say that the “kind” and the family are identical in every case: the team may determine that a few “kinds” are broader or narrower than families, as they explore all the available information.

Team members Jean Lightner and Tom Hennigan have been the lead researchers on the terrestrial vertebrates and doing the bulk of the work. Both have years of experience in “kinds” studies—Jean is a veterinarian and Tom an ecologist and associate professor at a Christian college. While the list of various living families of amphibians, reptiles, mammals, and birds is large (it includes hundreds of families), it is not as large as Woodmorappe’s estimates.

Georgia Purdom, a geneticist with Answers in Genesis, oversees the whole project. In 2011 she approached me about assisting with the number of extinct families from the fossil record, and I was thrilled. In the first phase a student and I published an estimate of the number of both living and extinct families based on leading references.8 That paper suggested 719 total kinds of mammals, terrestrial reptiles, and birds. We did not include amphibians, but the future studies will.

So, How Many Were There?

Currently, I am overseeing students in vertebrate paleontology at Liberty University to finalize a list of extinct families. Jean Lightner and Tom Hennigan are finalizing numbers of living families.

So far, the current estimate of living and extinct vertebrate families is about 950. While we will continue to evaluate these families to see if they should be split up or combined with other families for our final estimate of the “kinds,” 950 families is a good approximation. Given that most animals were brought onto the Ark by twos, while “clean” birds and mammals were brought by sevens, this means that Noah cared for approximately two thousand land-dwelling vertebrate animals.

The Ark Encounter team has just begun publishing the final estimate of Ark “kinds” in peer-reviewed creationist literature as a series of technical papers. The first paper, by Jean Lightner, was published in November of 2012.9 Each paper will discuss the methods, the resulting numbers of “kinds,” and descriptions of each. Combined, these works will help the Ark Encounter artists and planners faithfully represent these creatures in the full-scale replica of Noah’s Ark. Some no doubt will be familiar, but others will be unlike any animals you’ve ever seen! The amazing variety of God’s initial work at creation far exceeds the greatly limited variety we see among surviving species today.

The fossil record has expanded our imaginations about the wonderful possibilities of God’s creation. By His grace and by His leading, the Ark Encounter team hopes, once again, to give a loud witness to the Creator’s amazing wisdom, His judgment of sin during the Flood, and His provision of salvation. Jesus Christ, the Son of God and the Creator of the universe, is the One who brought the animals to Noah to be saved. Later He died on the Cross for sins, so all who would come to Him would be saved for eternity.

Dr. Marcus Ross is the assistant professor of geology and assistant director for the Center for Creation Studies at Liberty University. He holds a master’s degree in paleontology and a PhD in geosciences from the University of Rhode Island.
Previous Article Created Creature Next Article Pituitary—A Miniscule Master