Zonkeys, Ligers, and Wolphins, Oh My!

What exactly are these animals and how did they come to be? Are they new species? Can the Bible explain such a thing?

Although not exactly the same mantra that the travelers in the classic Wizard of Oz repeat, these names represent real life animals just the same. In fact, two of these strange sounding animals, a zonkey and a zorse, can now be seen at the new Creation Museum petting zoo. But what exactly are these animals and how did they come to be? Are they new species? Can the Bible explain such a thing?

What Is a Kind?

The first thing that needs to be addressed is “what is a kind?” Often, people are confused into thinking that a “species” is a “kind.” But this isn’t necessarily so. A species is a man-made term used in the modern classification system. And frankly, the word species is difficult to define, whether one is a creationist or not!

Instead, the Bible uses the term “kind.” The Bible’s first use of this word (Hebrew: min) is found in Genesis 1 when God creates plants and animals “according to their kinds.” It is used again in Genesis 6 and 8 when God instructed Noah to take two of every kind of animal onto the Ark and also in God’s command for the animals to reproduce after the Flood. A plain reading of the text infers that plants and animals were created to reproduce within the boundaries of their kind. Evidence to support this concept is clearly seen (or rather not seen) in our world today, as there are no reports of dats (dog + cat) or hows (horse + cow)! So, a good rule of thumb is that if two things can breed together, then they are of the same created kind. It is a bit more complicated than this, but for the time being, this is a quick measure of a “kind.” 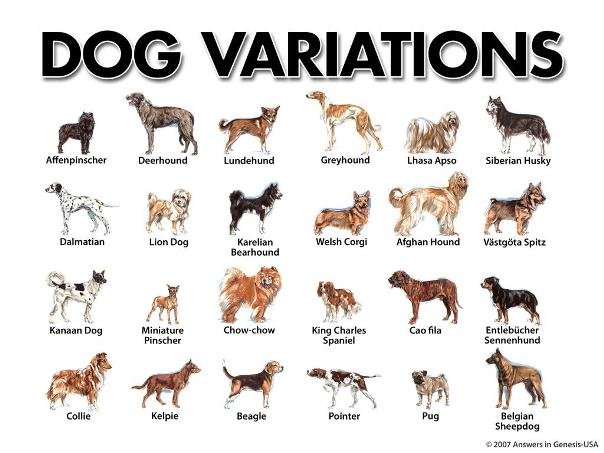 As an example, dogs can easily breed with one another, whether wolves, dingoes, coyotes, or domestic dogs. When dogs breed together, you get dogs; so there is a dog kind. It works the same with chickens. There are several breeds of chickens, but chickens breed with each other and you still get chickens. So, there is a chicken kind. The concept is fairly easy to understand. 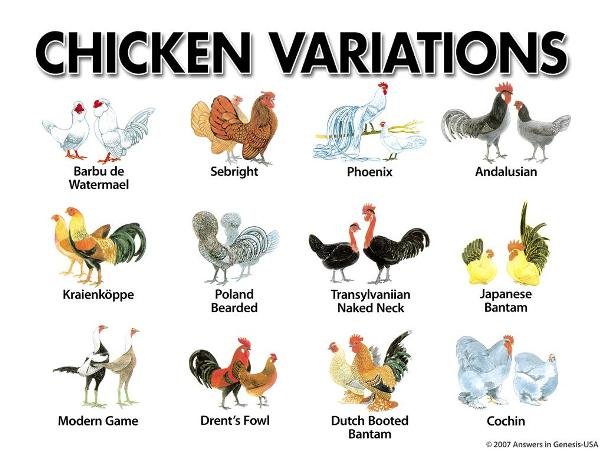 From a biblical perspective, though, land animals like wolves, zebras, sheep, lions, and so on have at least two ancestors that lived on Noah’s Ark, only about 4,300 years ago. These animals have undergone many changes since that time. But dogs are still part of the dog kind, cats are still part of the cat kind, and so on. God placed variety within the original kinds, and other variation has occurred since the Fall due to genetic alterations.

Variety Within a Kind

Creation scientists use the word baramin to refer to created kinds (Hebrew: bara = created, min = kind). Because none of the original ancestors survive today, creationists have been trying to figure out what descendants belong to each baramin in their varied forms. Baramin is commonly believed to be at the level of family and possibly order for some plants/animals (according to the common classification scheme of kingdom, phylum, class, order, family, genus, species). On rare occasions a kind may be equivalent to the genus or species levels.

Baraminology is a field of study which attempts to classify fossil and living organisms into baramins. This is done based on many criteria, such as physical characteristics and DNA sequences. For living organisms, hybridization is a key criterion. If two animals can produce a hybrid, then they are considered to be of the same kind.1 However, the inability to produce offspring does not necessarily rule out that the animals are of the same kind, since this may be the result of mutations (since the Fall). 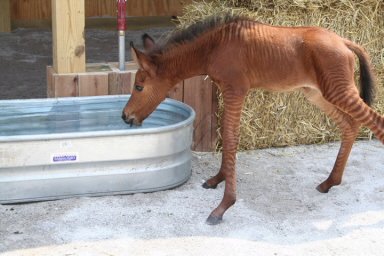 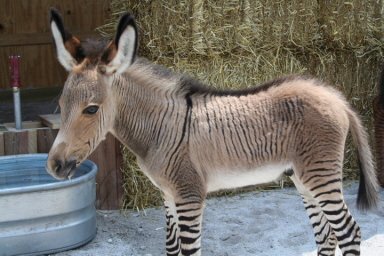 Zonkeys (from a male zebra bred with a female donkey), zorses (male zebra and female horse), and hebras (male horse and female zebra) are all examples of hybrid animals. Hybrid animals are the result of the mating of two animals of the same “kind.” Perhaps one of the most popular hybrids of the past has been the mule, the mating of a horse and donkey. So, seeing something like a zorse or zonkey shouldn’t really surprise anyone, since donkeys, zebras, and horses all belong to the horse kind. 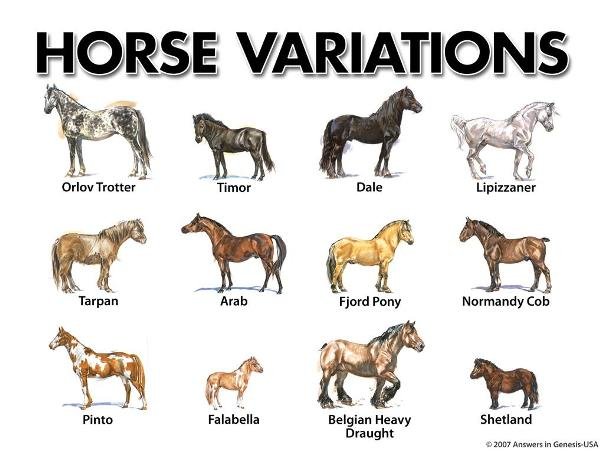 The concept of kind is important for understanding how Noah fit all the animals on the Ark. If kind is at the level of family/order, there would have been plenty of room on the Ark to take two of every kind and seven of some. For example, even though many different dinosaurs have been identified, creation scientists think there are only about 50 “kinds” of . Even though breeding studies are impossible with dinosaurs, by studying fossils one can ascertain that there was likely one Ceratopsian kind with variation in that kind and so on.

After the Flood, the animals were told to “be fruitful and multiply on the earth” (Genesis 8:17). As they did this, natural selection, mutations, and other mechanisms allowed speciation within the kinds to occur. Speciation was necessary for the animals to survive in a very different post-Flood world. This is especially well illustrated in the dog kind in which current members (e.g., coyotes, dingoes, and domestic dogs) are confirmed to be descended from an ancestral type of wolf.2 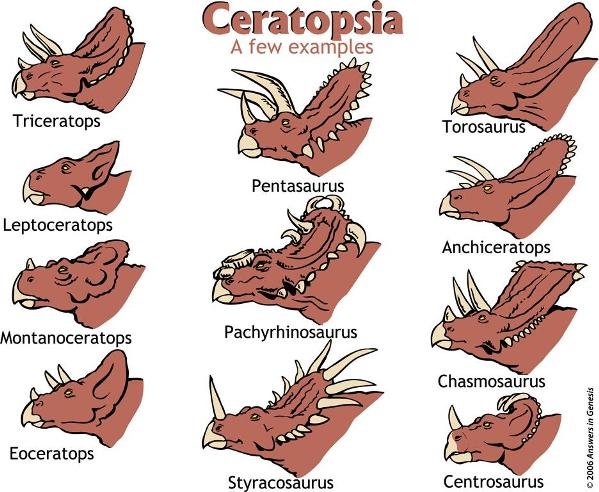 Hybrid animals are usually the result of parent animals that have similar chromosome numbers. Many times the hybrids are infertile due to an uneven chromosome number that affects the production of eggs and sperm. However, this is not always the case, as even some mules (horse + donkey) have been known to reproduce. Consider some of these amazing animal hybrids:

Ligers, Tigons, and Other Cats

Other hybrids in this family include bobcats that mate with domestic cats and bobcats with lynx (Blynx and Lynxcat). There have been mixes of the cougar and the ocelot, as well as many others. This shows that large, midsize, and small cats can ultimately interbreed, and therefore, suggests that there is only one cat kind.

Turning to the ocean, this hybrid is the result of mating within the family Delphinidae. The wolphin is the result of mating a false killer whale (genus Pseudorca) and bottlenose dolphin (genus Tursiops). Such a mating occurred in captivity at Hawaii’s Sea Life Park in 1985.3 The wolphin is fertile. This hybrid shows the difficulty of determining the species designation, since a major criterion is the ability to interbreed and produce fertile offspring. Even though the whale and dolphin are considered separate genera, they may, in fact, belong to the same species. This shows how difficult it is to define the term species. Of course from a biblical perspective it is easy to say they are both the same kind!

All of these animals’ ancestors—horses, donkey, zebras, tigers, lions, whales, and dolphins—were created with genetic diversity.

All of these animals’ ancestors—horses, donkey, zebras, tigers, lions, whales, and dolphins—were created with genetic diversity. Through time the processes of natural selection, mutation, and other mechanisms have altered that original information (decreased or degenerated) to give us even more variation within a kind. Great variety can be observed in the offspring of animals of the same kind, just as the same cake recipe can be used to make many different cakes with various flavors and colors. Hybrids have a portion of the same genetic information as their parents but combined in a unique way to give a very unique looking animal. What an amazing diversity of life God has created for us to enjoy!

The study of created kinds is an exciting area of research, and our hope is to help encourage others to get involved. Whether studying the duck-goose kind, elephant-mammoth kind, camel-llama kind, apple-pear kind, or others, the field of baraminology is a great place for biologists, botanists, geneticists, and paleontologists (for extinct kinds) to get immersed in creation research.

Previous Article Darwin at the Drugstore? Next Article Reformed View of Origins?