The Curious Case of Martian Mania

With the successful on-target Mars landing of the robotic rover dubbed Curiosity, a normally staid group of engineers and scientists erupted with joy as a fruit of their labor was achieved.

The rover has landed.

With the successful on-target Mars landing of the robotic rover dubbed Curiosity, a normally staid group of engineers and scientists erupted with joy on Sunday evening as a fruit of their labor was achieved. People watching from around the world vicariously shared in the excitement—and still are as the videos of the tense moments before touchdown are re-watched. Certainly the landing of this nuclear-powered robotic explorer, the heaviest device NASA has ever placed on Mars, is an impressive achievement. And the terrain chosen for the landing is more challenging than that selected for previous landings. 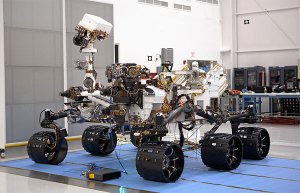 The rover Curiosity as it looked in California before it was transferred to Florida for its November 26, 2011 launch inside an Atlas V rocket.

Curiosity is essentially a roving laboratory. Its mission: to search for evidence life could have once existed on Mars. While the feats demanded by landing Curiosity are an early rehearsal for those required for a possible manned mission in the 2030s, the quest to find evidence for life is at the heart of the present mission.

During Curiosity’s long flight, we have discussed several aspects of the project. In this re-cap of one recent News to Note item, we explored the rationale and hopes for what Curiosity might find. Be sure to join us on Saturday for additional thoughts on the project and, of course, throughout the next two years as NASA shares with us their analysis of the data the rover digs up.

“Looking for hints-there-might-ever-have-been-life in all the right places … on Mars,” a discussion of “Evidence for ancient life on Mars could be just below the surface, new study finds” published in The Christian Science Monitor.

Curiosity, the latest Mars rover, is set to land on the Red Planet on August 5. Though no Mars lander has ever found any evidence of life, past or present, NASA researchers are hopeful. Long in planning, NASA scientists continue refining their analyses suggesting the best places to search. And according to a study by Alexander Pavlov and colleagues at NASA’s Goddard Space Flight Center, those places will mostly be just a bit beneath the surface.1

“Right now the challenge is that past Martian landers haven’t seen any organic material whatsoever,” said the study’s lead author Alexander Pavlov. “We know that organic molecules have to be there, but we can’t find any of them in the soil.”2 Pavlov’s team contends that, despite billions of years of bombardment by cosmic radiation, small organic molecules could still exist just 5–10 centimeters (2–4 inches) beneath the surface.

Of course, the presence of small organic molecules would not prove life ever existed on Mars. Organic molecules, thought to be the products of spontaneous chemical reactions, have been found in meteorites. (See News to Note, March 17, 2012 for a discussion of some of these.) The researchers believe that larger organic molecules—those with ten or more carbon atoms—would be more suggestive of a biological origin but would also be more likely to have broken down over time.

Previously, efforts to locate organics have analyzed possibilities below the maximum depth cosmic radiation can reach, about 1.5 meters (5 feet). But such deep drilling is not particularly practical. Pavlov’s team examined the possibilities for the shallower depths by modeling the soil and rock composition of Mars, the best guesses of the planet’s atmospheric density through time, and likely energy levels of cosmic radiation.

By such modeling based on the Red Planet’s history, the researchers suggest the rover explore “young” craters—those they believe to be less than 10 million years old. “You want to go to fresh craters,” Pavlov explained, “because there’s probably a better chance to detect complex organic molecules. Let nature work for you.” The idea of course is that the surface inside a fresher crater has had less time exposed to cosmic radiation than an undisturbed nearby older surface.

The methods of estimating the dates of events on Mars are as subject to unverifiable assumptions as methods from estimating the age of the earth—and even more so, actually, since there has been no radiometric dating of material ever performed on samples actually collected from Mars. Regardless of age, it does make sense that any organic molecules beneath the surface would have experienced less total exposure to radiation than undisturbed landscapes. Yet the presence of organic molecules does not prove life exists or ever existed on Mars.

While the Bible does not say that God didn’t create life on other planets, the Bible does tell us God created all life on earth during the first six days of Creation week about 6,000 years ago. A person does not have to be an evolutionist to wonder if there is any evidence of life on Mars. However, evolutionists generally think that life could have evolved anywhere conditions are right. They therefore believe that finding life’s footprint on Mars would confirm life evolved there just as they believe it did on earth. However, no mechanism has ever been observed on earth or anywhere else whereby life could randomly emerge from non-living elements. And if life were ever to be found on Mars, knowing it was there would not prove how it got there. Assuming it was not a contaminant from earth, its existence would just be a testimony to the fact that God can create life anyplace He chooses.