Flatfish—those odd-looking fish like flounder that have both eyes on the same side of their heads—have long been an evolutionary puzzle. Their sudden appearance in the fossil record without any sort of foregoing transitional forms has puzzled evolutionists. A few years ago, Oxford paleontologist Matthew Friedman published his study of Heteronectes, a fossil from Lower Eocene rock in Italy, conventionally dated at about 50 million years, as well as a similar fossilized extinct fish called Amphistium. He concluded that because one eye’s orbit was at or close to the top of the fish’s head in these fossils, they were transitional forms.

Transitional forms may be thought of as the “holy grail” of evolutionists, for if all kinds of organisms evolved from other kinds of organisms, then transitional forms in which features were gradually changing into distinctly different features should be abundant in the fossil record (e.g., the scale of a reptile becoming the feather of a bird). They are not, however. Friedman mentions the notable lack of transitional forms among spiny-finned fish, for example, when he writes, “Within acanthomorphs, our inability to tackle questions related to the sequence of changes underlying the assembly of specialized features or bodyplans in the absence of fossil data is not limited to this flatfish example.”1 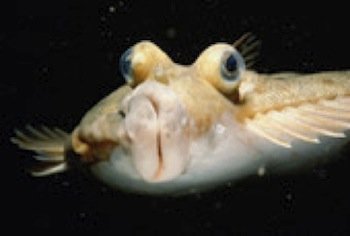 This yellowtail flounder, like all modern flatfish, has both eyes on one side of its head. However, flatfish often prop themselves somewhat with a fin, revealing there was likely an advantage to an extinct design variation in which one eye was deviated toward the top of the head but not all the way over. (Photograph by Jeff Rotman/Getty Images, obtained through news.nationalgeographic.com/news/2008/07/080709-evolution-fish.html) 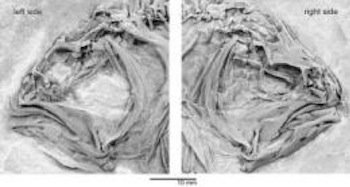 The left and right sides of Heteronectes’s head, showing the orbit on the right side to be in the middle, but the eye on the left profile view is deviated, upward, near the top of the head. We can well imagine this variety of flatfish propped slightly on one fin like modern flatfish, able to keep an eye on a wide range of happenings. (Credit: Image by M. Friedman, obtained through phys.org/news/2012-06-mystery-flatfish.html) 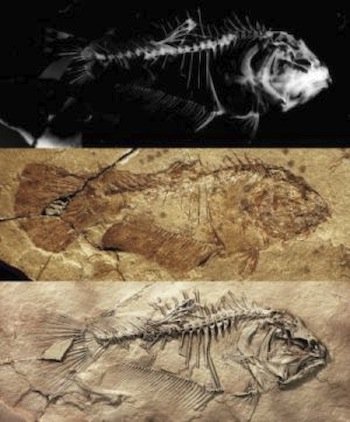 Below the X-ray of Heteronectes are before-and-after photos of the fossil, showing the improvement in visible detail after the acid-transfer procedure. Study of these details confirms the fish has skeletal characteristics typically found in flatfish, with the supposedly “incomplete orbital migration”2 of the eye being the primary distinction. However, the variation of eye position represents a variation found in extinct flatfish, not evidence of evolution between kinds of creatures. (Credit: Image by M. Friedman, obtained through phys.org/news/2012-06-mystery-flatfish.html)

In an encore performance of his 2008 study, Oxford paleontologist Matthew Friedman has now used an acid-transfer technique to dissolve some of the matrix from around a fossilized flatfish analyzed previously. His re-examination of the fossil confirms his previous findings. The fish differs from modern flatfish in only minor ways with the exception of the eyes. Heteronectes’s left eye is located near the top of the skull but has not migrated to the opposite side.

Friedman’s conclusion—that Heteronectes is a transitional form between fish with symmetrical skulls and the hundreds of flatfish species with two eyes on the same side of their heads—remains unchanged.

Friedman’s conclusion—that Heteronectes is a transitional form between fish with symmetrical skulls and the hundreds of flatfish species with two eyes on the same side of their heads—remains unchanged. He concludes that the lack of transitional forms from the fossil record “lies in the way the fossils are treated.”3

Yet despite Friedman’s fine work freeing the fish from its stony tomb, creationists will still consider Friedman’s conclusions to be, as the Institute for Creation Research zoologist Frank Sherwin put it in 2008, “underwhelming.”4 Sherwin added, “We have no problem with the variation within flatfish. What we’re asking is, Show me how a fish came from a nonfish ancestor.”5

Adult flatfish, with their bizarre cranial asymmetry, actually begin life with cranial symmetry. Then, as a flatfish larva develops into a juvenile flatfish, one eye migrates to the other side of the head. Juvenile flatfish are known to swim at odd angles until the development is complete and they adapt.6 Not only is this orbital transit a normal part of flatfish development, but at every stage of the process the fish is still a fish.

Furthermore, Friedman explained in a 2008 interview, “It’s possible that even the intermediate eye position would have provided an evolutionary advantage for the fish. Living flatfish often don’t lie completely flat on the sea floor—they prop themselves up with their fins. Once you get that extra degree of movement, having a slightly shifted eye is going to be a lot better than having no shifted eye at all.”7 Thus, Friedman, in 2008 and again in 2012, has described a reason that various permutations of the eye asymmetry would be of potential advantage to varieties of flatfish, including the extinct Heteronectes and Amphistium. But he has not described evolutionary transitional forms, just varieties of flatfish. In fact, these extinct kinds of flatfish are fossilized in the same rock layers as ordinary flatfish, their supposed evolutionary descendants. As Sherwin told the National Geographic reporter in 2008, “Fish have always been fish, all the way down to the lower Cambrian, [conventionally dated 542 to 488 million years ago].”8

Commenting on Friedman’s study, Los Angeles Natural History Museum expert on fossilized fish, John Long, said, “This is a profound discovery which clearly shows that intermediate fossil forms, which according to certain creationist theories shouldn’t exist, are regularly turning up as scientists keep looking for them.” However, creationists do not claim variations within created kinds “shouldn’t exist”! Nothing about this discovery or its “re-discovery” screams transitional form or demonstrates evolution of one kind of creature into another kind of creature. God created all kinds of fish on the fifth day of Creation Week about 6,000 years ago, as His eyewitness account in Genesis records. And all kinds of fish were designed to reproduce after their kinds (Genesis 1:20–23). The created kinds of fish were equipped by God with the genetic information to vary within their kinds, but not to evolve into new kinds of creatures.