Something Fishy About Gill Slits!

A National Geographic photo-essay showing the diversity and beauty of ocean-dwelling worms, has resurrected a piece of scientific misinformation that should have died long ago.

“Hawaii’s Unearthly Worms,”1 a National Geographic photo-essay showing the diversity and beauty of ocean-dwelling worms, unfortunately has resurrected a piece of scientific misinformation that should have died long ago when Haeckel’s embryologic pictures were shown to be fraudulent. Stating that the worms’ gill slits are just like those on embryonic humans, the article deceives the reader.

Like Darwin,2 Haeckel claimed that the developmental stages of an embryo retrace its evolutionary past. In other words, the human embryo supposedly goes through a fish stage, an amphibian stage, a reptile stage, and so on.3 Countless students have therefore been taught, “Ontogeny recapitulates phylogeny.” Support for this notion came, not from scientific research and observation, but solely from Haeckel’s own diagrams. 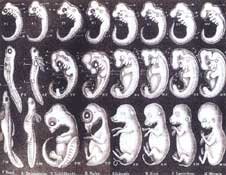 Haeckel’s famous (infamous) set of 24 drawings purporting to show eight different embryos in three stages of development, as published by him in Anthropogenie, in Germany, 1874.

Ernst Haeckel was a professor of zoology in Germany from 1865 until 1909. In 1868, he fabricated the embryologic evidence for evolution by fraudulently producing the diagrams to “prove” the theory.4 Reputable German scientists immediately began refuting his evidence, demonstrating that Haeckel had falsified his pictures. Notwithstanding, these diagrams have been taught in biology textbooks at the high school and university levels as recently as the 1990s and the idea they purport to prove is still presented in textbooks today.5,6,7

So what are these misnamed structures? Actually, they are nothing more than folds in the region of the tiny embryo’s throat. By the 28th day of life, the embryo’s brain and spinal cord seem to be racing ahead of the rest of the body in growth. Therefore, for a time, the spinal cord is actually longer than the body, forcing the body to curl and flexing the neck area forward. (This curled embryo with the long spinal cord is mistakenly accused by some people of having a tail.) Just as many people develop a double chin when bending the neck forward, so the embryo has folds in its neck area due to this flexing.

One reason for assigning names to all these parts is the fact that each fold shapes itself into specific structures, none of which are ever used for breathing. The outer and middle ear as well as the bones, muscles, nerves, and glands of the neck develop from these folds. Only superficially do these important folds ever resemble gills; the pharyngeal arches are no more related to gills than stars are to streetlights.

“Hawaii’s Unearthly Worms” further states that the thousands of species of marine worms are descended from the first sea animals to evolve 500 million years ago. However, there is no mention of intermediate forms, living or fossilized, to reveal the evolutionary past of these worms. Each of these species of worms is a worm—a fully functional, often-complex organism making no pretense to being any other kind of organism.

How unfortunate that a magazine as well-respected in the public eye as National Geographic would continue to propagate a known scientific falsehood. Could this perhaps be an attempt to manipulate the thinking of millions of readers with the same facility a graphics artist uses to manipulate computer images? The adage is true, “Reader beware!” Perhaps we should all just go back to enjoying the nice pictures.