Developments in Fish Said to Show How Limbs Evolved

Development of “pre-hands” in fish said to show how terrestrial animals evolved limbs.

Hox genes, present in many kinds of organisms, are a kind of “genetic switch.” They regulate the expression of other genes. Hoxd13 codes for production of a protein that regulates genes for limb development in mice. Fish produce very small amounts of this protein and form fins. 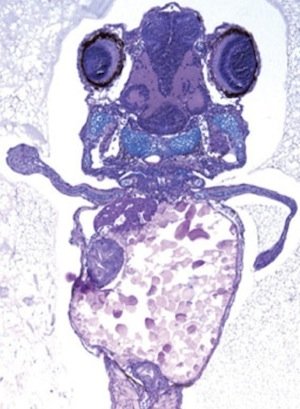 “Look, ma, no fins!”1 reads the caption of this photomicrograph of a zebrafish embryo. Four days earlier, this embryo and others like it were injected with mouse genes that control the expression of genes for limb development. Image credit: Freitas et al./Developmental Cell (2012) through www.newscientist.com

Researchers therefore injected zebrafish embryos with lots of mouse hoxd13 genes. Within 24 hours fin development slowed, and cartilaginous proliferation began in the region where fins would otherwise have developed. The genetically enhanced fish embryos continued along this line of development for four days before dying.  The researchers thought this cartilage growth, though asymmetrical, uncontrolled, and distorted,2 was somewhat reminiscent of that seen in the embryologic precursors of hands and feet.

“Of course, we haven't been able to grow hands,” says Dr. José Luis Gómez-Skarmeta, who with his colleague Dr. Fernando Casares led the research team. But Casares believes that increased expression of regulatory genes like hoxd13 in ancestral fish may have unlocked the genetic key to terrestrial evolution.

“We found that in the zebrafish, the mouse hoxd13 control element was capable of driving gene expression in the distal fin rudiment,” Casares explained. “This result indicates that molecular machinery capable of activating this control element was also present in the last common ancestor of finned and legged animals and is proven by its remnants in zebrafish.” 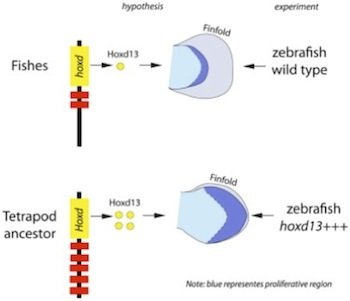 This diagram shows the effect of small amounts of the protein produced by hoxd13 genes in normal fish compared to the effect of the large amount of the protein in fish embryos injected with a big dose of mouse hoxd13. In the presence of small amounts of the regulatory protein, fins develop. But large amounts of the regulatory protein apparently unlock the genes needed to produce cartilaginous proliferation resembling that seen in limb development. Thus the researchers suspect that terrestrial evolution was merely a matter of deregulating the genes for limbs so they could grow. Image credit: www.cell.com

In the evolutionary scenario suggested here, growing limbs instead of fins would not be so much a matter of acquiring new genetic information as it would be “switching on” information already present. Evolutionists are convinced that the fossil record demonstrates that fish actually did this—developed limbs. Some extinct fish and even living ones like lungfish and coelacanths have lobed fins. Many evolutionists view such fish as examples of the evolutionary transition to terrestrial walking.

The fossil record and the living world reveal biodiversity among fish, not their evolution. There are finless fish, fish with ordinary fins, and fish with lobed fins. But all these creatures are fish. The fossil record does not demonstrate the needed transitions. Among living fish, coelacanths are lobe-finned fish that breathe with gills. Lungfish have spindly lobed fins without any long limb bones or any sacrum to stabilize the “lobes” for walking. Lungfish are able to move about in shallow water and can even breathe air. Both fish function well in their environments but lack any sort of skeletal transition toward terrestrial life.

Rather than imitating an evolutionary process that supposedly produced an organism adapted for life on land, this research showed how disruption of a single genetic regulatory mechanism designed by God wrecked the normal development of the embryonic fish. Just four days later they all died.

God created all kinds of fish on the fifth day of Creation week, each able to reproduce after its kind. Just one day later, He created land animals and man. He did this about 6,000 years ago, not millions of years ago. He did not require evolutionary processes to produce terrestrial vertebrates but only His word.

Better understanding of genetic regulation in embryonic development is important in our understanding of some birth defects. Gómez-Skarmeta explained, “In the case of genes involved in limb formation, their abnormal function is associated with diseases such as synpolydactyly and hand-foot-genital syndrome.” However, nothing about this research provides support for evolution. The potential medical advantage depends solely on the experimental science accomplished here, not on evolutionary presuppositions.

A common Designer—our Creator—used similar genes to accomplish somewhat similar functions in many different organisms. Genes to regulate the proper expression of other genes are part of the finely tuned intricate design of each organism. And in a sin-cursed world, sometimes those designs go awry. Common genes are a result of having a common Designer, not a common ancestor.