Three-dimensional images of fossil will force evolutionists to revise their terrestrial story, but not much.

Paleontologists examining delicate fossils hopelessly encased in a rocky matrix sometimes have to guess about how to reconstruct extinct animals. A new technological application is now taking some of the guesswork out of paleontological reconstructions by peering inside rocks in an unprecedented way. And what this new technology is seeing will revolutionize the way paleontologists reconstruct some vertebrate backbones. Because evolutionists believe these animals are transitional links between aquatic and land animals, it will also alter the way they construct their tale of terrestrial evolution.

Paleontologists for the past century have been reconstructing these tetrapod backbones backwards, according to a team led by Dr. Stephanie Pierce of the Royal Veterinary College and University of Cambridge Professor Jennifer Clack. They performed high-resolution 3D X-ray imaging at France’s European Synchroton Radiation Facility to get a good look at fossils of four-legged animals hidden in rock.

Though the headline in The Daily Mail proclaims these images will “overturn a century of research,” they will really just necessitate some new twists in a century of evolutionary speculation.

Evolutionists have built the evolutionary story of the vertebrate conquest of land by comparing the anatomy of animals like lobe-finned fish and amphibians—or at least extinct creatures that we would classify as amphibians today. (Fossils provide some anatomy, and evolutionary imagination provides the transitional connections.) In Nature, the team writes, “The construction of the vertebral column has been used as a key anatomical character in defining and diagnosing early tetrapod groups. . . . Nonetheless, very little is known about vertebral anatomy in the earliest stem tetrapods, because most specimens remain trapped in surrounding matrix, obscuring important anatomical features.”1 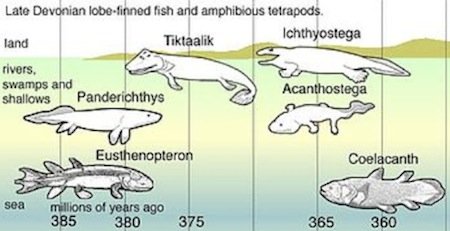 Evolutionists believe the existence of lobe-finned fish and extinct amphibians is evidence that fish evolved into terrestrial animals. There is no scientific support for this belief, as these animals are simply animals with interesting anatomical variations. Two of the animals depicted in this sketch, the Ichthyostega and the Acanthostega, were examined in this study, which unveiled the actual anatomy of their vertebral bones. Evolutionists now will adjust their story to account for the fact that the vertebral bones were not put together the way the previous, century-old evolutionary story claimed. See “The Fossil Record of ‘Early’ Tetrapods: Evidence of a Major Evolutionary Transition?” for more information about these fish and amphibians and to learn more about the problems with evolutionary claims about their role in the origin of terrestrial life. Image credit: en.wikipedia.org

“For more than 100 years, early tetrapods were thought to have vertebrae composed of three sets of bones—one bone in front, one on top, and a pair behind,” explains Pierce. “But, by peering inside the fossils using synchrotron X-rays we have discovered that this traditional view literally got it back-to-front. The results of this study force us to re-write the textbook on backbone evolution in the earliest limbed animals.”

“Comparison of Ichthyostega with two other stem tetrapods, Acanthostega and Pederpes, shows that reverse rhachitomous vertebrae [multipart vertebrae assembled in this newly discovered way] may be the ancestral condition for limbed vertebrates,” the team writes.2 These four-legged animals are thought to have been well-adapted for swamp life. Evolutionists don’t consider Ichthyostega and Acanthostega to be amphibians because they believe amphibians didn’t evolve until the Carboniferous period, and these appear somewhat lower, in the Devonian part of the fossil record. (Pederpes appears in the lowest Carboniferous layers.) 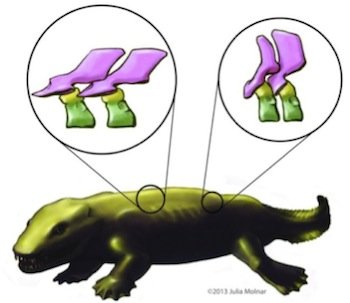 3-dimensional X-ray imaging has made it possible to see the details of rock-encased fossils. The vertebrae of this four-legged Devonian Ichthyostega can now be examined with greater accuracy, and it turns out that for a century paleontologists have been making wrong guesses about how they are put together. They’ll now have to change the evolutionary inferences they have made on the basis of their incorrect anatomy to match the new anatomic information. In truth, however, anatomical structure cannot prove this animal was an evolutionary ancestor of anything. Image credit: © 2013 Julia Molnar in www.dailymail.co.uk 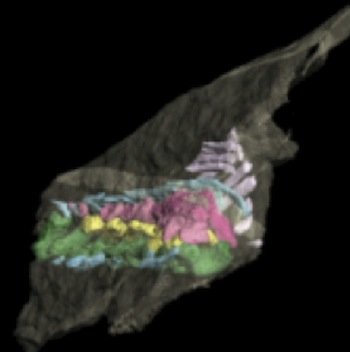 This video image shows Ichthyostega’s fossilized remains like a ghost inside its rocky abode. The rocky matrix encasing this and similar fossils has made direct examination of the fossils’ anatomy impossible. New technology reveals the actual anatomy. The anatomical parts here are color-coded. Paleontologists, who try to construct an evolutionary story to connect the anatomy from the fossil record of various kinds of animals, must now change the tale to fit the new anatomy. However, no such tales of ancestral origin can be observed scientifically. These ancestral tales are only guesses, just-so-stories based on a naturalistic, Bible-rejecting, worldview-based, scientifically unverifiable assumption that animals evolved into other kinds of animals. Watch this video (supplementary video 2) and others like it at www.nature.com Image credit: S. Pierce et al. “Vertebral architecture in the earliest stem tetrapods” Nature (2013) doi:10.1038/nature11825 www.nature.com

By understanding the correct way the components of each vertebra were assembled, paleontologists believe they can better understand how the vertebrate owners of those vertebrae shifted their weight between legs. Pierce say, “By understanding how each of the bones fit together we can begin to explore the mobility of the spine and test how it may have transferred forces between the limbs during the early stages of land movement.”

Other surprising discoveries included “hitherto unknown skeletal features” such as a row of bones in the center of Ichthyostega’s chest. Clack says, “These chest bones turned out to be the earliest evolutionary attempt to produce a bony sternum. Such a structure would have strengthened the ribcage of Ichthyostega, permitting it to support its body weight on its chest while moving about on land.” Actually, Clack and colleagues aren’t really sure these bony remnants are leftovers from a sternum, as they have apparently been displaced toward the back of the animal and don't have rib attachment points.3 They suspect the bones were ossification centers within a cartilaginous structure, however, so the rib attachments to cartilage may have simply not fossilized.

“Overall, the findings described here demonstrate that the traditional rhachitomous model has been misguidedly projected onto the earliest limbed vertebrates, producing inaccurate reconstructions that have been replicated in the literature for more than half a century,” the team writes. “This study fundamentally revises our current understanding of vertebral column evolution in the earliest tetrapods and raises questions about the presumed vertebral architecture of tetrapodomorph [lobe-finned] fish and later, more crownward, tetrapods [four-legged animals believed to be evolutionarily advancements].” 4

Unlike the vertebral bones of humans, some extinct vertebrates’ vertebrae consist of unfused parts. Evolutionary scientists see these multipart vertebrae as steps on the evolutionary path to modern anatomy rather than simply a different anatomical structure that some kinds of animals have. Because they assume that four-footed land animals had to evolve from aquatic animals, they also try to imagine the steps that would have been necessary to transform functional fins into functional weight-bearing legs. Therefore, a reconstruction that changes the view of how extinct animals walked must alter the steps evolutionists imagine for how the transformation took place.

Likewise, the discovery that this extinct animal may have had a sternum does not demonstrate the sternum was an evolutionary leap or any sort of evolutionary transition but only that this animal like many others—birds, mammals, amphibians, and many reptiles, but not fish—may have had a sternum. Amphibians typically have a sternum made of cartilage, a substance which generally does not fossilize as well as bone. If this animal had a sternum composed primarily of cartilage, these ossified remnants may be all that remains of it. The presence of a “sternum” composed of unfused bones would not imply it was an evolutionary development. Even the modern opossum has a sternum composed of unfused elements.

Evolutionists believe fish evolved limbs with digits and then evolved into terrestrial animals—so-called “more crownward tetrapods.” The Bible, however, provides God’s account of the fact that He created the various kinds of fish and birds on the 5th day of Creation week and all kinds of land animals and man on the 6th day. Each kind, according to Scripture, was created to reproduce “after its kind.” Fossils of amphibians and fish—even lobe-finned fish—fail to demonstrate that land animals evolved from fish but only demonstrate the biodiversity of amphibians and fish. Learning more accurate details about their anatomy does not provide evidence for the evolutionary tale. Their presence in the fossil record does not demonstrate evolutionary ancestral connections. Instead, their fossil record is a record of their burial during the catastrophic global Flood as their habitats were swept up in the tumult.

See “The Fossil Record of ‘Early’ Tetrapods: Evidence of a Major Evolutionary Transition?” for analysis of many problems with evolutionary assertions about the origin of terrestrial animals from fish, including a discussion of the fossils examined in this study.