Scientists in China are excited to report their analysis of a much older batch of miscellaneous disarticulated dinosaur embryo bones and eggshells.

Most known dinosaur eggs have been excavated from Cretaceous rock layers, but scientists examining a square meter of an outwash from a hillside in Lufeng, Yunnan Province, China, are excited to report their analysis of a much older batch of miscellaneous disarticulated dinosaur embryo bones and eggshells. They report these embryos are associated with 195 million year old early Jurassic rock, about 125 million years older than previously discovered dinosaur eggs.1 Because this batch of fossils contains bones at a variety of developmental stages, they can draw some conclusions about dinosaur embryology. Their analysis suggests these sauropod bones belonged to the fastest growing vertebrate embryos known to history. 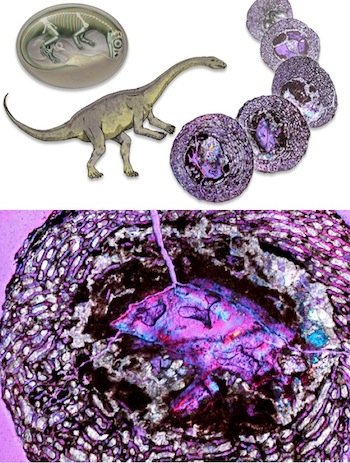 About 200 disarticulated dinosaur embryo bones excavated along with a good bit of eggshell from early Jurassic rock represent various stages of the development of sauropodomorphs. These long-necked dinosaurs grew to be about 30 feet long. The large vascular spaces indicated in purple in the bone cross-sections (seen close-up in the second image) are consistent with a fast growing animal, suggesting these dinosaurs had made a good start on life by the time they hatched and may well have hit the ground running. These are the deepest dinosaur embryos yet found in the fossil record. Images: (top left) D. Mazierski; (center) Debivort/Creative Commons; (right) D. Mazierski and D. Scott from photos by A. Le Blanc through Science; close-up A. LeBlanc through online.wsj.com

Appropriately named Lufengosaurus after its place of discovery, the researchers report long-necked sauropodomorph dinosaurs like these reached about 30 feet in length as adults. (The much larger sauropods grew to 200 feet.2)

“They were the biggest things that lived in the neighborhood,” says lead author Robert Reisz, though no complete skeletons were found at this site. Reisz actually prefers his batch of miscellaneous bones, however, saying, “When you get a beautiful little embryo inside an egg, it’s gorgeous, . . . but it’s only a glimpse, sort of like a frozen moment in the embryonic life of the animal. Here, because we have limb bones at various different stages of development, we can actually follow the embryonic life of the organism.”

“The nests were inundated by water and basically smothered, and the embryos inside the eggs died and then decayed,” Reisz speculates. “And then more water activity moved the bones and concentrated them into a very small area. We only excavated 1sq m of the ‘bone bed’ and we got more than 200 bones.”3

Among the bones recovered with the eggshells are 24 femur bones about as thick as pencil lead. The longest are twice as long as the smallest, suggesting that quite a bit of growth occurred in the egg. Cross sections show the vascular spaces were quite large, and in living embryos such large vascular spaces are associated with rapid growth. The capacious vasculature of these bones therefore suggests that these embryos grew remarkably fast. The incubation period is of course unknown, but Reisz believes they were “growing quite fast, faster than other dinosaurs and faster than a lot of living animals whose embryology we know very well.”4

The bones also showed the tell-tale marks of being shaped by muscles, they report, demonstrating that the developing animals moved while inside the eggs. Birds do this, they report. (So, not surprisingly, do modern reptiles. Turtle embryos can even move toward a heat source outside the egg.)5

Synchroton X-ray scanning suggests the fossils may also contain residual organic molecules, possibly collagen. “Organic remains [of dinosaurs] have been found before, but this is by far the oldest,” Reisz says. This finding—because of the vast age involved—is controversial among evolutionary paleontologists. Paleontologist Lius Chiapppe of the Natural History Museum of Los Angeles County, commenting on the report, says, “This lends support to the idea that that some of these organic molecules . . . may actually be preserved over millions of years.” But Smithsonian paleontologist Hans-Dieter Sues says, “Almost every example of such organic material is hotly disputed. You can never really totally rule out contamination.” More invasive testing has not yet been done.

More and more we read reports of preserved “soft tissue” in fossils thought to be millions of years old. Such biomolecules are quite fragile, so such reports were (and still are) viewed with skepticism by many paleontologists. Yet some researchers, such as Mary Schweitzer last fall, have shown convincing evidence that the soft tissue they have found is not contaminant but is authentic biomolecular footprints—not of modern bacterial contaminants—but of these ancient animals. The question remains: how ancient? Just how long a biomolecule such as a protein or DNA could be preserved sheltered in a fossil is unknown, but 200 million years does seem quite excessive.

If the presence of organic material in these embryos is confirmed, the finding will add to the roster of remarkably ancient biochemistry. And while no imaginable mechanism could explain such preservation for millions of years, residual biomolecules sheltered within fossils since being suddenly buried in the global Flood less than 4,500 years ago is a lot easier to swallow. The preservation of proteins such as collagen and keratin, structures such as blood cells, and even bits of DNA are consistent with the young age of the earth, but are unbelievable in a millions-of-years scenario.