Catastrophically buried together thousands of years ago, dino-mom and eggs come to light.

Two dinosaur eggs buried in Upper Cretaceous rock in Patagonia near a theropod skeleton are stretching the dinosaur evolutionary family tree. Eggs about 7 centimeters in diameter were found less than 20 centimeters from a skeleton presumed to be the mother, prompting speculation about the reproductive biology of these dinosaurs and their relatives.

The dinosaur named Bonapartenykus is a theropod of the sort evolutionists believe gave rise to birds. Others in its branch of the family tree—called Alvarezsauridae—have been found in Jurassic rock in China and deeper Cretaceous rock in South America. Evolutionists consider this branch to be a “basal type” that evolved into more advanced types. However, having found members of this basal type in lower Jurassic rock and throughout the Cretaceous, Martin Kundrát, author of the study published in Cretaceous Research, says, “This shows that basal alvarezsaurids persisted in South America until Latest Cretaceous times,”1 a span of over 100 million years. Analysis of the eggshell microstructure and other characteristics, the researchers hope, will help them to trace the evolution of the egg and its parents. 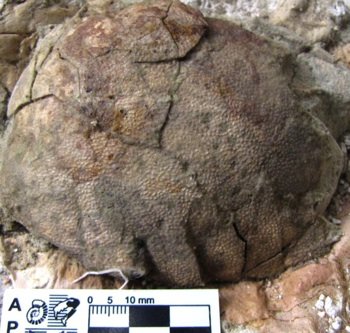 A Bonapartenykus egg with tiny bumps on the surface.
Image from www.livescience.com/19595-birdlike-dinosaur-eggs.html

As to the question of whether this dinosaur had already laid her eggs or died with eggs still inside, researchers cannot be sure.

As to the question of whether this dinosaur had already laid her eggs or died with eggs still inside, researchers cannot be sure. The fact that there were two eggs suggests that—if she was buried with the eggs still inside her oviducts—then she probably had two oviducts as they suspect some other theropods found with paired eggs did. Kundrát considers this “indirect evidence for keeping two eggs in two oviducts,” adding, “They were close to being laid, but the female didn't make it.” Additional analysis, however, failed to rule out the possibility that the dino-mom had been incubating her eggs in a now non-existent nest, making the dinosaur’s reproductive anatomy uncertain.

The eggs also appear to have been playing host to fungi—“the first evidence of fungal contamination of dinosaur eggs.” Though Kundrát compares this finding to the present-day common occurrence of non-lethal fungal contamination of bird eggs, there is no reason to assume this happened only in birds or creatures destined to evolve into them.

Although evolutionists assume the geologic column represents the order of evolving life, in light of biblical history we understand the geologic column as a timeline of catastrophic burials, mostly during the year of the global Flood. Thus, this dinosaur and her eggs succumbed to a load of waterborne sediment about 4,300 years ago. It is therefore not surprising to find similar dinosaurs in several layers since they lived—not evolved—at the same time. It is likewise no surprise to find that fungi fossilized in the Cretaceous rock apparently behaved and looked just like fungi does today. And while the characteristics of eggs and skeletons can help paleontologists classify various kinds of dinosaurs and varieties within those created kinds, there is no evidence that any kind of creatures evolved into other kinds, such as birds. Whatever the relationship of the eggs to the dino-mom, it is clear both mom and eggs were catastrophically buried, whether just before or soon after the eggs were laid, so as to all be so well preserved.