Climate change predictions in the news have been proven to be inaccurate.

The Daily Mail, Der Spiegel, the Telegraph, and the Economist have all reported in recent weeks that our collective goose is not cooking as precipitously as predicted. Headlines about the past decade’s significant shortfall of world surface warming have further fueled the fires of climate change controversy. The Daily Mail, for instance, titled its headline: “The Great Green Con no. 1: The hard proof that finally shows global warming forecasts that are costing you billions were WRONG all along.”1

Because many mainstream scientists and political entities are convinced that global warming is the result of man’s activities, the response to the presumed crisis has had major economic impact around the world. Restructuring of industry and mandated alterations to consumer goods to decrease the emission of greenhouse gases—the alleged culprits in manmade global warming scenarios—has cost consumers and governments a great deal of money. U.S. President Obama’s proposed 2014 budget alone proposes a 6% increase in spending to research climate change (up to $2.65 billion) in addition to money designated for regulatory functions.2

Those skeptical of the magnitude and significance of climate change hasten to point out that only eleven years before the United Nations’ Intergovernmental Panel on Climate Change (IPCC) was created to sound the alarm about global warming, policy makers and mainstream scientists of 1977 feared we were entering a new ice age, warning of food shortages and erratic weather related to global cooling. Now, a graph based on the IPCC’s computer modeling shows that the earth really isn’t warming up as predicted. Leeds University climate change professor Piers Forster notes, “Global surface temperatures have not risen in 15 years. They make the high estimates unlikely.”3 And David Whitehouse of the Global Warming Policy Foundation says, “This changes everything. Global warming should no longer be the main determinant of economic or energy policy.”3 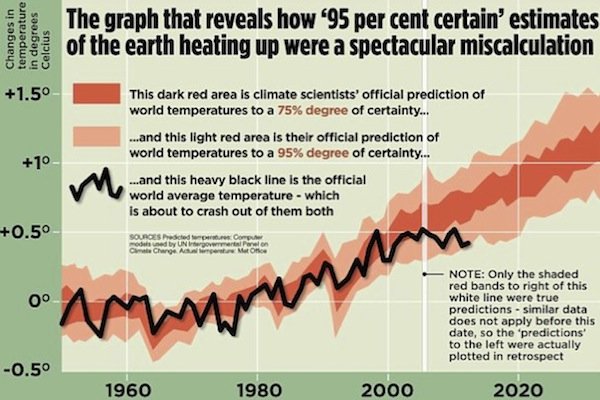 This graph of actual average world temperature (black) compared to computer models (orange) shows that for the past decade the temperature has not been rising. Skeptics point out that the nice correlation to the left of the vertical white line is a result of the fact that the model was constructed retrospectively, after those temperatures were recorded, and therefore naturally corresponds. The graph is based on data from United Nations’ Intergovernmental Panel on Climate Change (IPCC). Image leaked from the IPCC, via The Daily Mail.3

Other experts say this plateau is just a brief respite in a catastrophic trend. They note that ten years is only a short time, much too short to declare a winner in the debate. Nevertheless, the contempt with which politically correct doomsayers have treated those who are skeptical about the severity and man-made origin of global warming does seem to justify some rejoicing as they hear mainstream experts like Oxford University geoscientist Myles Allen say the catastrophic estimates are “looking iffy.”4 Demonized atmospheric carbon dioxide may really not be the cause of all our woes.

The shortfall in degrees does give a little breathing room, perhaps for scientists on both sides of the controversy to acknowledge the enormous complexity of the questions—how much global warming should we expect, what will be its significance, and is it within man’s power to restrain?

Marc Morano of ClimateDepot.com, which opposes the conventional view, says, “In the peer-reviewed literature we're finding hundreds of factors influence global temperature, everything from ocean cycles to the tilt of the earth's axis to water vapor, methane, cloud feedback, volcanic dust, all of these factors are coming together. They're now realizing it wasn't the simple story we've been told of your SUV is creating a dangerously warm planet.”

Elgie Holstein of the Environmental Defense Fund, however, denies that the lull is a surprise and says, “This is a highly complex calculation to make in the first place. The short period of time, only 10 years in which the increasing temperature has leveled, really doesn't tell us very much other than the fact that temperatures may still be rising but just not as fast as they were before.”

Dr. Andrew Snelling, who holds a PhD in geology from the University of Sydney in Australia, notes that the debate over climate change is far from a settled issue. He says, “There is a lot of controversy, not over climate change itself, as everyone agrees climate changes, but over the cause of such changes, specifically whether man has contributed significantly to such changes. I am personally aware of several secular professional scientific societies whose memberships are very divided on this issue, and the continuing debate is heated.”

We are, according to Genesis 1, responsible to care for the earth God created. More research is clearly needed on this important subject. Unfortunately, some who contend that climate change is a man-made problem base their views on unverifiable ideas about the untestable past. Neither speculation about the past nor a shouting match dominated by politically correct views should dominate the ongoing investigation. Perhaps this “respite” in rising temperatures will serve as a reminder of the importance of keeping discussion open for all quarters.