by Dr. Elizabeth Mitchell on May 26, 2012
Featured in News to Know
Share:
Email Using:
Gmail Yahoo! Outlook Other

Ink recovered from two giant squid fossils found near Bristol in England has resisted degradation despite the passage of years. One fossilized ink sac was even intact. Most organic material degrades over the years, and this is the first successful effort to subject ancient melanin to direct chemical analysis.

Melanin is a pigment found in many kinds of organisms—bacteria, fungi, plants, and animals. There are several different kinds of melanin distinguished by the molecular structure. Melanin-containing granules have been identified in other fossils but can be mistaken for fossilized bacteria. The actual chemical analysis achieved by this team is therefore an important achievement. An international team of scientists led by University of Virginia chemistry professor John Simon analyzed the ink recovered from the fossils using a variety of techniques. Their conclusions appear in the May 21 edition of the Proceedings of the National Academy of Sciences.

The melanin proved to be the eumelanin type, identified by the amino acids present and their arrangement. Further analysis showed the ink is chemically identical with the ink found in the living cuttlefish Sepia officinalis. (Both squid and cuttlefish are cephalopods, said by people who eat them to taste the same.)

Out of all of the organic pigments in living systems, melanin has the highest odds of being found in the fossil record.

“Though the other organic components of the squid we studied are long gone, we’ve discovered … the melanin has remained in a condition that could be studied in exquisite detail,” Simon says. “Out of all of the organic pigments in living systems, melanin has the highest odds of being found in the fossil record. … We had to use innovative methods from chemistry, biology and physics to isolate the melanin from the inorganic material.” He says this combination of techniques should be applicable for recovering organic material from other fossils providing “ways of identifying organic components in fossils that might have been missed using standard methods.” 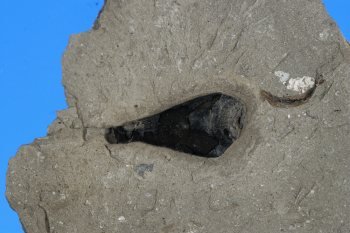 Fossilized ink sac in fossilized giant squid, believed by evolutionists to be 160 million years old, contains ink chemically indistinguishable from the ink of modern cuttlefish. Image from the British Geological Society through LiveScience.

“As we look back and think about what we know about life before our time, it’s mostly through skeletal info,” Simon explains. Preserved soft tissue, however, offers “a whole new window into species that are extinct and their relationships to modern-day [organisms].”1

The results show, Simon says, “that the pigmentation in this class of animals has not evolved in 160 million years. The whole machinery apparently has been locked in time and passed down through succeeding generations of squid. It’s a very optimized system for this animal and has been optimized for a long time.” He adds, “The ‘aha moment’ for me was when we looked at the techniques for chemical bonding and we couldn’t find anything that distinguished the pigment in the fossil from the pigment in a modern-day cuttlefish, which suggests the pigment hasn’t changed in 160 million years. When I think about other evolutionary transitions that just amazes me.”2

So can organic materials really persist for millions of years? A few years ago the discovery of intact red blood cells from dinosaur bone and subsequent recovery of keratin and collagen from other ancient fossils has certainly raised that question. While the chemical analysis of this ink and other organics recovered from fossils is a matter that can be subjected to repeatable direct scientific testing, the assignment of age is indirect and dependent on various unverifiable assumptions.

There is nothing about these organic molecules that suggests any particular date or age.

Most of the prolific fossil-bearing portion of the geologic column (the so-called Phanerozoic), including the Jurassic section where these squid were found, can be explained by Flood geology. Therefore, we can say based on biblical history that the melanin in this squid’s ink has survived chemically intact for over 4,300 years. Not millions, but impressive nevertheless.

Evolutionists believe this ink evolved to its optimal state long ago, though they have no evidence that this ink evolved from some “primitive” ink (whatever that may mean). Since evolution depends on the accumulation of countless mutations through deep time, it is always a little surprising from an evolutionary point of view to find a substance that remained impervious to any changes at all for those many millions of years. From a biblical point of view we understand this ink to be a substance designed by God and unchanged for merely a few thousand years.