Image by Nicholas Grande, via Unsplash.

Are you thankful for your dinosaur’s drumsticks?

Ever mindful to immerse the world in evolutionary mythology, the Smithsonian.com’s “Dinosaur Tracking” column on Thanksgiving Day a few years ago zoomed in on your turkey’s genealogy. While it is good to be aware of the currently popular classification system, it is vital for us to make our children—who are constantly exposed to evolutionary dogma from many directions—understand the implications of calling a bird a dinosaur. 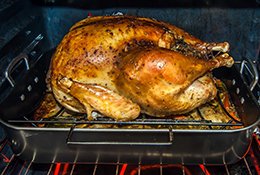 Will you dish up a delectable dinosaur for Thanksgiving dinner? Will you stuff the cousin of a six-foot-tall Velociraptor for your table? A Thanksgiving Day columnist wrote, “If you dissect your holiday theropod just right, the ancient nature of the tasty avian is strikingly evident.” Yet what is evident is only a bird’s anatomy. The similarities and differences of anatomical features are understandable when we realize our Creator designed all living things. Your Thanksgiving bird contains no evidence that it evolved from dinosaurs.

We can borrow an analogy from Shakespeare, “What’s in a name? that which we call a rose / By any other name would smell as sweet.”1 Juliet, in the play Romeo and Juliet, argues that names are irrelevant. While the tragic outcome in the classic play is well-known, the tragic consequences of surrendering to the evolutionary implications of calling your Thanksgiving dinner a dinosaur are more subtle.

Man-made classification systems change to reflect current observations and understanding. That is good and reasonable. But reclassifying birds as dinosaurs reflects not scientific observations but only evolutionary imagination. Those pushing to get our children to believe, as columnist Brian Switek writes, “Birds are dinosaurs. That’s a fact,” accept this “fact” without genuine support and demand you do the same. They believe dinosaurs evolved into birds. Their contention is part of a belief system that insists simple life forms evolved through random natural processes from nonliving elements and then over billions of years evolved into progressively more complex living things, including humans.

Is there any support that dinosaurs did indeed evolve into birds and that birds are therefore just a highly evolved special category of dinosaur? No. The dinosaur family tree, as laid out in Switek’s article and numerous other sources, is a product of imagination because it does not just categorize variations among dinosaurs—a reasonable taxonomic endeavor for paleontologists—but assumes that those dinosaurs evolved from simpler forms and evolved into different kinds of creatures.

A large part of the case for dinosaur evolution rests on the presumption that non-feathery “dino-fuzz” along the edges of some fossils represents evolutionary predecessors of feathers. Those fibers often blossom—but only under the influence of the artist’s brush—into feathery plumes rivaling peacocks. Those plumes bring out the latent psychologists among paleontologists as they struggle to explain the evolutionary function of “proto-feathers.” The usual presumed function generally has something to do with attracting mates, staying warm, and feathering nests. Yet none of this behavior, much less the actual evolutionary steps in feather development, can be supported. They are mere supposition. But to make the evolutionary case more plausible, some genuine birds with genuine feathers get recruited to the ranks of dinosaurs. After all, man-made classifications can reflect wishful thinking. (See “Feathered Dinosaurs Found in Canada?,” “Function for Microraptor’s Extra Set of Wings,” “Oviraptor Flirting Techniques Revealed In Study,” and “What? Another feathered dinosaur claim?” for more information.)

There are a host of problems in the evolutionary dinosaur-to-bird scenario. Respiratory systems, body aerodynamics, finger embryology, and the complexities of the feather compared to scales present irreducible complexities for the evolutionary paradigm. The problems are not solvable by experimental, operational science because no kind of creature has ever been observed evolving into another kind of creature. There is no observable mechanism to make the new genetic information for such evolutionary transitions attainable through natural processes. Evolutionists interpret fossils as proof that such evolution happened because their worldview rejects the alternative—that the various kinds of creatures were designed, specially created by God without evolution.

God’s historical record in the Bible indicates he created birds on the fifth day of creation week and then created land animals—which would have included dinosaurs—on the sixth day. He created living things to reproduce “after their kind,” varying within their kinds but not evolving into more complex or different kinds. Scientific observation confirms that this still happens today.

Discussing dinosaurs and biblical apologetics over turkey leftovers may give you indigestion, but we owe it to our families to be sure they understand the truth. Calling a bird a dinosaur doesn’t make it one. If we give in to the new vocabulary and assume “a bird by any other name would taste as good,” we implicitly accept all the evolutionary propaganda that attempts to write God’s truth—from creation to Christ—out of history, out of faith, out of life. And the consequences for that acquiescence will for many, who may then reject the Bible’s truth about salvation, be truly and eternally tragic.