Were feathered dinosaurs found in Canada?

“If we were in China, we’d call these feathers,” said curator François Therrien, as he examined some Canadian dinosaurs from Alberta’s Royal Tyrrell Museum of Paleontology. “It became the running joke.”1 The three ostrich-like ornithomimids had been found in Upper Cretaceous deposits of Alberta, Canada. Finally the idea took flight, leading to a full-fledged publication in Science. Hailed as the first feathered dinosaurs outside China and Germany, adult ornithomimids are said to have sported long feathered wings. But what did Darla Zelenitsky, François Therrien, and their colleagues really find?

In addition to “filamentous feathers”—0.5 mm (less than 2/100 of an inch) wide and 15-50 mm (about ½ to 2 inches) long—the team found, not feathers, but “linear markings on the surfaces of the ulna and radius”2 of one adult’s forelimb. The little marks, 1.5 mm (less than 6/100 of an inch) wide, measured up to 6.5 mm (about ¼ inch) long.3 The team reports their distribution was consistent with what they would expect if the insertions of feathers on a bird’s bones fossilized.4 “We don't know how long the shafted feathers were on the adult ‘wings,’” Therrien said. “But, based on the size of the markings, we think the ‘wing feathers’ would have been much longer than the filamentous feathers.” 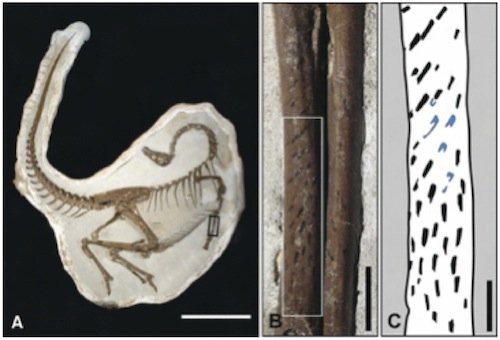 This adult Ornithomimus edmontonicus, found in 1995, is the fossil getting attention for its “shafted feathers.” It has no actual feathers. Seventy linear discolorations measuring up to 1/4 inch long appear on the front limb bones. (The scale bar in photo B is 2cm, and the scale bar in sketch C is 1cm.) The researchers write, “We interpret them [the marks] as traces of the calami [tips of feather shafts] of covert [covering] feathers that covered the forearm in Ornithohominus.”5 Image from Science. 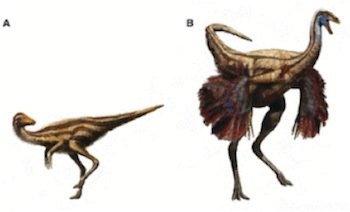 This artist’s reconstruction was published in Science (“figure 4A/B”) to illustrate the researchers’ interpretation of their findings. “A” represents the juvenile, and “B,” the flightless adult with long feathered wings. “This dinosaur was covered in down-like feathers throughout life,” Zelenitsky explained, “ but only older individuals developed larger feathers on the arms, forming wing-like structures.”6 Illustrations by Julius Csotonyi, published in D. Zelenitsky et al.7 through http://www.sciencemag.org

Ornithomimus means “bird mimic.”8 “They superficially resembled ostriches, with a toothless beak, large eyes, long legs, long tail, and now we know they had feathers,” Zelenitsky says, “but these animals were not closely related to ostriches.” The turkey-sized juvenile was about 5 feet long. The two ostrich-sized adults, about 12 feet long, are thought to have been too big to fly.

The juvenile, with only filaments, could not have flown from predators. So if ornithomimids really had feathers, researchers want to know what they used them for. What selective advantage could feathers have provided? “The fact that wing-like forelimbs developed in more mature individuals suggests they were used only later in life,” Therrien says, “perhaps associated with reproductive behaviors like display or egg brooding.”9 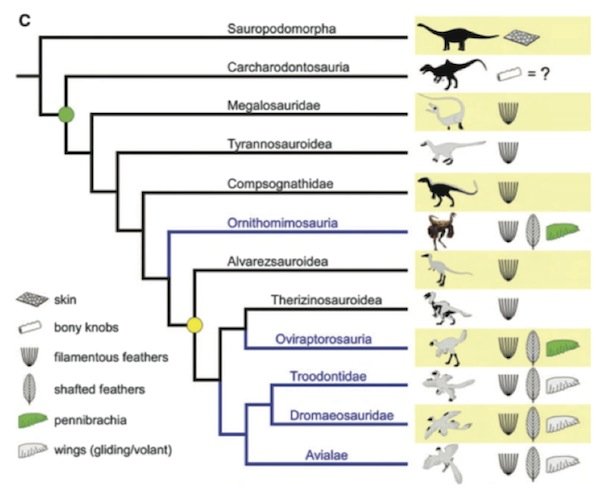 This phylogenetic tree represents the evolutionary view of dinosaur-to-bird evolution. The green dot is the proposed branch point for theropods. The yellow dot—placed after ornithomimids are said to have branched off—represents the beginning of maniraptorans. Evolutionists generally believe that maniraptorans evolved into birds. The current paleontological findings associated with each group—filaments, feathers, and wings—are indicated. Note that the ornithomimids are noted to have all three, even though the fossilized evidence only consists of some marks on bony surfaces without any actual feathers or wings being present. Also note that the groupings include actual birds, some being extinct. 10 Image published in D. Zelenitsky et al.,11 through http://www.sciencemag.org.

Maniraptorans are very loosely defined as birds and “all dinosaurs closer to birds than to ornithomimids.”12 They are the “theropod dinosaurs that many paleontologists believe birds were derived from some 150 or so million years ago.”13 Ornithomimids are believed to have branched off of the dinosaur family tree just before maniraptorans. Genuine feathers on a Cretaceous ornithomimid would suggest that feathers (and wings to hold them) evolved earlier than previously thought. Therefore, Zelenitsky says, “What these specimens do is they fill a significant gap in the record of fossil feathers in the dinosaurs that are linked to birds. These specimens show the earliest occurrence of wings in this group of dinosaurs leading to birds.”14 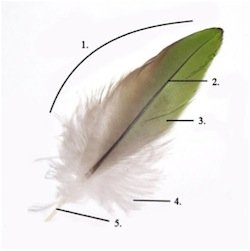 This is a bird’s pennaceous feather. Its parts are: 1. Vane 2. Rachis 3. Barbs (connected by barbules and hooks) 4. Afterfeather 5. Calamus. None of these feathers were found on the ornithomimid fossils. The researchers suggest that tiny marks on the forelimb may have been places where the calami of such feathers inserted into the bones. Image from Wikipedia.

Their artistic reconstruction notwithstanding, the team did not actually find real feathers. They found neither barbs nor central shafts (rachis). And the forelimb is only called “winglike” because of its presumptive (but missing) long feathers. Evolutionists online, debating the researchers’ interpretation of the bone marks as evidence “that adults had long wing feathers while juveniles didn’t,”15 have suggested the lack of barbs, while consistent with supposed early feather evolutionary stages, is inconsistent with pennaceous feathers.16 One (The Theropod Database) plainly calls “their oft-copied figure 4A/B [reproduced above] of the little unwinged individual and adult with ostrich-like wings possibly misleading.”17

So-called “filamentous feathers” (aka “dinofuzz”) are fossilized filaments lacking the normal anatomical features of feathers. Evolutionists, in their zeal to demonstrate that birds evolved from dinosaurs and that the amazingly complex modern feather evolved as a series of stepwise innovations, have defined these “filaments” as “feathers” or “protofeathers” and decided they must represent steps of the evolutionary process. Furthermore, they have to presume a function for these primordial structures that would give their owners a survival advantage so they could keep evolving.

So could the marks have been insertion points for real feathers? A more important question would be, were these ornithomimids only “bird mimics” (just dinosaurs), or were they really birds? The defining characteristics of the various categories are established to support the evolutionary beliefs about bird evolution. Calling a bird a dinosaur doesn’t make it one. Some “maniraptorans” had modern feathers and were really just birds, like the Microraptor we discussed last week and very likely at least some specimens commonly grouped with Oviraptors.18 As the “Theropod Database” writer notes, “the seemingly solid position of ornithomimosaurs outside Oviraptorosauria+Paraves isn't quite as definite as it seems. It's just that basically all recent coelurosaur matrices inherit the character bias and miscodings” of the classification schemes, adding, “So no surprise their topologies are all similar.”19 In other words, the manmade classification system and definitions create the relationships. Even the evolution-activist group National Center for Science Education admits that some so-called feathered dinosaurs, “In the cold light of day . . . seem most likely to be birds.”20

Given the lack of visible feathers, the data about these ornithomimids remains inconclusive. God made all kinds of birds on the 5th day of Creation week and land animals such as dinosaurs on the 6th. And nothing about this study demonstrates the evolution of feathers or the evolution of birds.

Previous Article Lucy in the Trees Next Article News to Note, November 17, 2012