Bird’s brain is no “birdbrain” but fine-tunes songs on-the-go.

Though a bird doesn’t have vocal cords like humans, it has a syrinx at the forked junction of its trachea. By adjusting the tension in muscles controlling the rings of cartilage and the membranes in the syrinx as well as regulating air movement from each airway, the bird produces distinctive songs. You might think that studying how a bird controls its songs would be as easy as matching musical notes to neurons firing in the brain, but it’s not. Researchers have tried.

University of Chicago professor Daniel Margoliash’s team, in developing an effective way to match the movements that produce birdsong to the neurons in the brain and to the songs themselves, has discovered that the zebra finch’s brain is able to evaluate and fine-tune songs even while it sings.

Margoliash’s team measured neuronal activity at key places in the finches’ brains while they sang. Replaying the songs while the birds slept, they determined which neurons fired in recognition. A bird’s neurons respond specifically to his own songs.1 “It is amazing that such small units of movements are encoded, and so precisely, at the level of the forebrain,” says Margoliash. 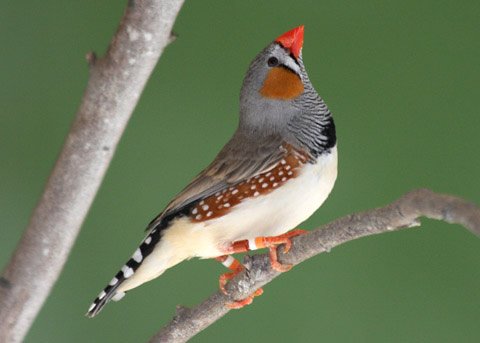 The zebra finch is a favorite for birdsong research. Typically only the male sings. Areas of the brain known to be related to birdsong are considerably more developed in the male, and the recent study measured the activity of specific neurons while the birds sang and while they listened to their own songs while sleeping. Image from www.burleylab.org.

Then the team determined which specific muscle movements controlling the syrinx can physically produce each song and generated a synthetic song using their model. They tested the synthetic song by playing it to a sleeping bird. When the bird’s neurons responded, they figured they had the model correct. 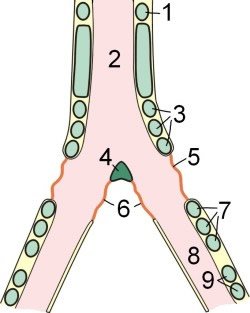 A bird’s syrinx at the bifurcation of its trachea is the source of its songs. Sound is produced as air passes by the vibrating cartilaginous pessalus (4) and walls of the syrinx (5) and (6). Muscles change the tension in these walls as well as the diameter of the bronchial openings to modulate the sound. (In the diagram, small green ovals mark cartilaginous rings surrounding these air pathways.) Some songbirds can even produce two songs at once by separately regulating the airflow from each lung.2 Image by Uwe Gille, via Wikimedia Commons.

The surprising finding was the discovery that the HVC (higher vocal center) in a bird’s brain actually fires almost simultaneously with the bird’s own song production. There is not sufficient time for these neuronal signals to cause movement at the syrinx. Therefore, the researchers believe the HVC is, in essence, rehearsing what it expects to hear—and the corresponding muscular signals—for comparison with the song the bird is actually singing.3 This sort of feedback provides a continuous mechanism to correct the songs. 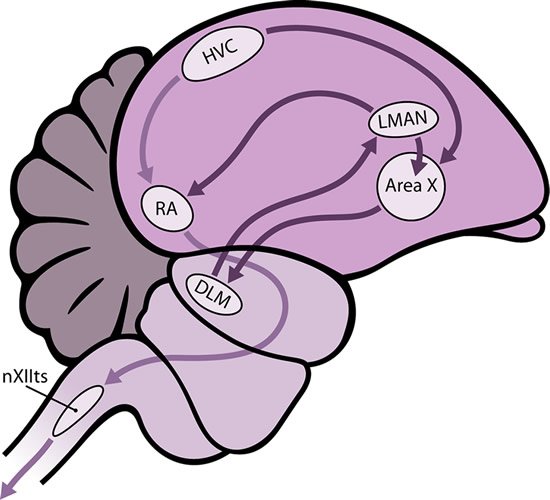 The centers of neuronal activity required to learn and produce birdsong are shown in this model. HVC (previously known as the higher vocal center) is involved in both learning and singing. New research shows that the HVC also instantaneously compares the expected song and the corresponding muscle movements to the song the bird is singing, allowing for feedback and correction. Image by F. Nottebohm, from PLoS Biol.4

Athletes and musicians are particularly aware of the importance of “muscle memory.” A complex series of intricate motions, performed correctly over and over again, seems to embed itself in the brain or the fingers as a unit. But determining just how that occurs, in terms of mapping the activities of the brain, is not so easy. Likewise, speech disorders can be very difficult to evaluate because it is difficult to relate the symptoms—like aphasia after a stroke or stuttering—to the precise problems in the brain. Insights from Margolias’s study of birdsong production may shed light on these complexities of human functionality.

It’s difficult to find a natural framework with which to analyze the activity of single neurons. The bird study provided us a perfect opportunity.

“It’s difficult to find a natural framework with which to analyze the activity of single neurons. The bird study provided us a perfect opportunity,” explains Margolias. “A big question in muscle control is how the motor system organizes the dynamics of movement. Movements like reaching or grasping are difficult to study because they entail many variables, such as the angles of the shoulder, elbow, wrist and fingers; the forces of many muscles; and how these change over time. With all this complexity, it has been difficult to determine which of the many variables that describe movements are the ones that are represented in the brain and used to control movements.”

Neuroanatomists consider several areas of a bird’s song-learning and song-production neural pathways to be homologous with areas in the human brain.5 The discovery that finches learn the detailed movements required to refine their songs, remember and recognize what they’ve learned, and “play” a real-time “tape” of the expected song and its associated movements while it sings suggests that the bird model may be useful in gaining insights into human speech disorders.

But does that mean that these systems randomly evolved along similar lines? Or that they evolved at all? No. (And these researchers in their study do not make any such claim. Next week we will take a look at another recent study of human speech that does leap to such conclusions.)  What we see here is that thanks to our common Designer, animals and man possess many common design features. This neuroanatomical complexity in finches may help sort out human performance issues, thanks to common design, not to evolution.