Aerodynamic simulation suggests a role for the Microraptor’s extra set of wings.

Animals with four wings are certainly not unheard of. (Just consider the dragonfly!) But modern birds only have two. So the discovery of the four-winged Microraptor gui in 2003 naturally excited interest in aerodynamic possibilities. Not all modern birds fly, so did Microraptor? And if so, how? “New Model for Hindwing Function in the Four-Winged Theropod Dinosaur Microraptor gui,” presented by Justin Hall and Michael Habib at October’s meeting of the Society of Vertebrate Paleontology in North Carolina, suggests an answer.1

Although anatomically modern feathers are visible on Microraptor fossils, reconstructions have varied greatly. The fossils, of course, are crushed specimens offering few clues to the three-dimensional appearance of the original, much less its normal methods of locomotion. Some reconstructions have pictured all four limbs extended outward, and others have suggested a biplane appearance. 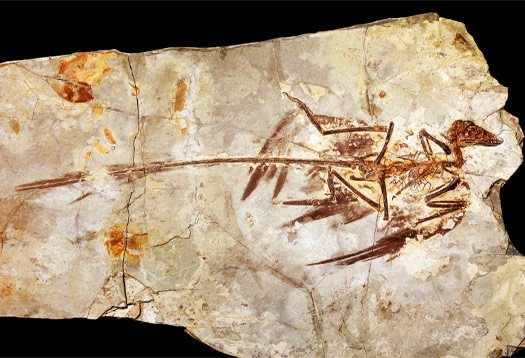 The Microraptor gui had actual feathers on four limbs and a fan of feathers on its tail. How it used them has been an aerodynamic mystery. Image from www.futurity.org.

“The anatomical problem with the previous model is that essentially the animal was doing the splits and would have nearly had to dislocate its hips to get its legs into that position,” Hall said. “As anatomy instructors, Mike and I both knew it was physically impossible for the animal to have done that.” Furthermore, aerodynamically, using the rear wings for flight “made the animal worse both at flying and gliding than if it had used its front wings alone.”2 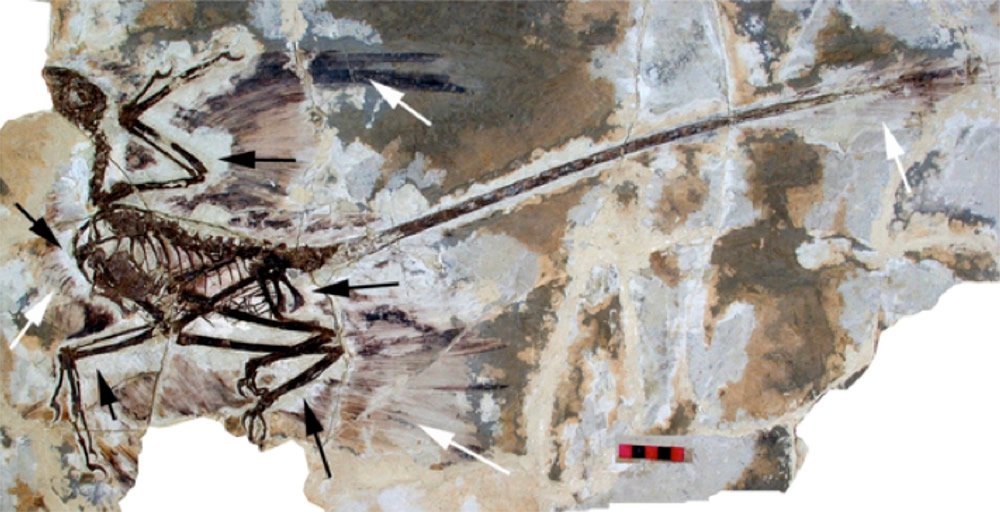 This Microraptor gui fossil’s anatomically modern feathers, denoted by white arrows, are visible on its limbs and tail. Black arrows mark “halos” where investigators suspect additional unpreserved feathers would have been located. The scale bar is 5 cm long. Image by David W. E. Hone et al., via PLoS ONE.3

Habib and Hall instead analyzed a model of the bird (which they, like many evolutionists, classify as a raptor-like dinosaur) with its rear wings tucked up under it. Like rudders, the feathery limbs could be extended to facilitate turning. The long tail’s feather fan could have been useful for pitch control. Their model suggests the resulting agility would have enabled Microraptor to turn twice as fast as a two-winged animal.

As Hall explained, “There wasn’t an alternative until we raised this new model which keeps the legs directly under the body in a way that is consistent with the posture we see in all known dinosaurs, in birds and also in the original specimen of this type of animal. . . . We combined our knowledge of anatomy with an understanding of the aerodynamics of how animals actually fly.”4 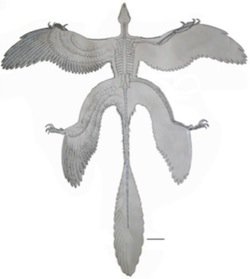 This reconstruction of the Microraptor’s four wings suggested that all four were useful for flight, but the current study demonstrates the aerodynamic impracticality of this arrangement. Image by Xing Xu et al., via Nature.5

“A combination of pitch control by the tail, roll generation by the ‘hindwings’ and multi-purpose control by the main wings would have made Microraptor a highly maneuverable animal,” Habib explained. The rear limb feathers would have created a lot of drag. “For every surface, you pay a little drag tax,” Habib said.6 But the advantage of improved ability may well have outweighed this problem. “For the first time, we appear to have a solid answer to the mystery of dinosaur hind-wings, as well as the function of the tail feather fan,” he said. “In the process, we have solved a major problem in the evolution of dinosaur flight—the problem of control.” 7

“This study provides a plausible mechanism by which dinosaurs that otherwise have strongly Velociraptor-like bodies could take to the air and control themselves while in flight,” Hall added. “Obviously crashing is bad for the long-term health of the animal, but until now we had little idea how the earliest flying dinosaurs avoided such catastrophes given their relatively simple wing structure.”8 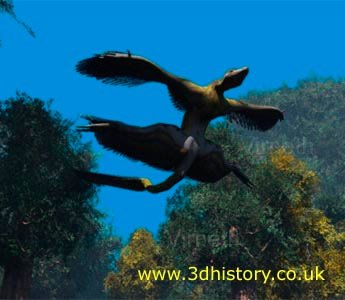 This reconstruction of Microraptor suggests a biplane arrangement to enhance gliding. Of course, the possibilities for running on the ground don’t look too promising! Image from www.3dhistory.co.uk

Many evolutionists classify Microraptor as a dinosaur, making its genuine-appearing feathers appear to be at the top of the transitional tree in their hypothetical evolutionary pathway from dinosaurs to birds.9 And regardless of their thoughts on what Microraptor were, evolutionists still look to this creature for clues to elucidate the evolution of flight. Some have suggested the crow-sized animal could not fly at all, while others propose it glided down from trees to grab dinner and extended its flight by flapping. Still others suggest it flapped and ran along the ground or up an incline to take-off into the trees, much as juvenile birds do when learning to fly.10 Some flap-running proponents object to Habib and Hall’s model, but Habib says their model works for either flapping or gliding. 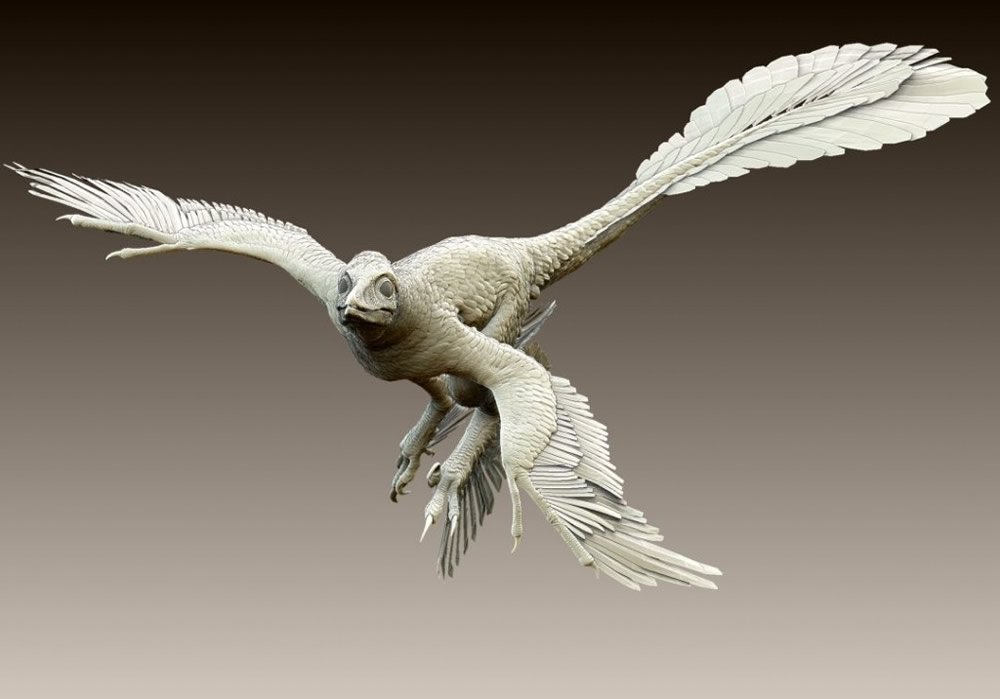 This model of the Microraptor represents its rear limbs tucked under its body out of the way until needed for rudder control. Image by David Krentz, via Scientific American.11

Nothing about this study actually supports the notion that dinosaurs evolved into birds or that the ability to fly had to evolve at all. God created flying creatures on the fifth day of Creation week about 6,000 years ago, and they already were equipped to fly. What the study does do is reveal a possible aerodynamic way that this extinct four-winged bird compensated for what paleontologists think were “small pectoral muscles”12 to get off the ground. The Microraptor was neither a clumsy evolutionary intermediary nor an evolutionary success story but rather a fully functional flying creature whose unique aerodynamic design reveals another aspect of the variety in God’s amazing designs for flying creatures.