Through the arid desert air of the Atacama Desert, the ALMA array of telescopes has captured crisp images of high-velocity molecular jets apparently projecting from a star 1,400 light years away. These jets in the Herbig-Haro object—HH 46/47—are in the news because the stunning photos coupled with their fabled association with star formation makes for one of the greatest shows off the earth.

Analysis of this Herbig-Haro object suggests its jets have even greater velocity than previously suspected, about one million kilometers per hour. Herbig-Haro objects, which look like tiny nebula, are named for two astronomers who studied a number of them about fifty years ago. About 400 are known, and they are thought to represent the shocking disturbance of the environment around a young star. HH 46/47 was discovered in 1977. The current images are the highest resolution images of it yet available, however, because the lack of water vapor in the air of the earth’s driest desert enables telescopes there to capture images with minimal distortion.

Herbig-Haro objects are generally believed to be associated with star formation. Many astronomers think that collapsing clouds of dust and gas form stars. They theorize that most potential star-forming gas remains dormant while some interstellar gas collapses and produces enough gravitational compression of atoms to start the process of nuclear fusion, forming a protostar. 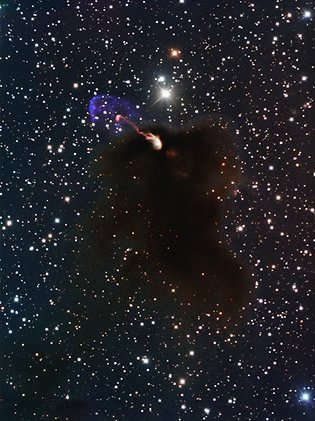 Herbig-Haro object HH 46/47 seen here is in the constellation Vela, about 1,400 light years from earth. Image from AP, via news.com.au.1

Herbig-Haro objects have jets of material moving outward, with the jets apparently colliding with the surrounding gas. Generally one or more jets of material are seen. The spectra of the jets reveal that they are excited to glowing, not by ionizing radiation (which is the case for most glowing clouds), but rather by collisions between the jets and surrounding material. The jets emanate from the star (or, if the star isn’t visible, then where the star, shrouded by clouds, probably is).

Opinions vary as to what exactly is happening to produce Herbig-Haro high velocity plasma jets. Some astronomers believe they could represent the “termination of the infall phase”2 of accretion disc formation during the presumed star formation scenario. Others think they are produced as material is ejected from a star’s core.3 Astronomers analyzing the ALMA images of HH 46/47 note that the process by which Herbig-Haro objects form “remains a mystery.”4

One theory is that matter falling down onto a young star forms a disk around the star’s equator. Since matter from the disk feeds down onto the star, we call this disk an accretion disk. The interaction of matter near the inside of the accretion disk causes the outflowing jets of material perpendicular to the disk, aligned with the star’s poles.

Astronomers have never actually witnessed a star being born. Astronomers who firmly believe they are witnessing the births of many stars realize they can only grab snapshots of the process. Dr. Faulkner says,

These sorts of snapshots and their interpretation as various steps in the process of stellar birth are frequently reported. The best one could say is that this is a recently born star or a star in the process of being born. Unfortunately, in the minds of most people these interpretations of images are taken as direct observations of the actual births of stars, suggesting to most people that a star appeared where none was seen before. This definitely was not the case. I suspect that this Herbig-Haro object hasn’t appreciably changed in the 36 years since its original discovery.

We must remember that these images could be interpreted differently, such as material falling onto a mature star.

Are There Really Any New Stars? 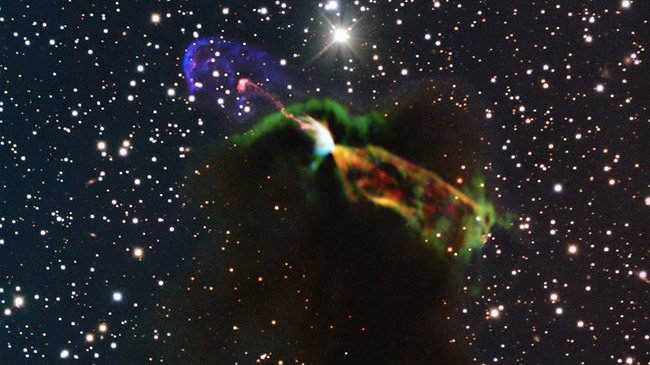 This image of HH 46/47 was produced by combining radio and visible light frequencies gathered using the ALMA array of telescopes. The orange/green jet and the pink/purple jet are thought to represent collisions of high velocity jets of ionized molecules with their gaseous environment. Image from AP, via news.com.au.5

Could stars still be forming? After all, we see existing stars explode as supernovae, so why not star formation? The Bible does not say God is not making more stars, though it does say He finished the work of Creation on the sixth day. “Thus the heavens and the earth, and all the host of them, were finished” (Genesis 2:1). The ongoing formation of stars seems contrary to the laws of physics, given the conditions that exist in space.

Star formation supposedly happens when swirling gas cools and condenses until it is dense enough to possess enough gravity to prevent re-expansion. However, gases tend to expand, not contract. Furthermore, if a swirling mass of gas contracted, it would spin faster in order to conserve angular momentum, and that increased angular velocity would oppose ongoing contraction. Finally, the great increase in the magnetic field that would accompany the massive collapse of gas would oppose the shrinkage needed to form a star. Ongoing star birth therefore seems unlikely. Astronomical wonders currently thought to be stars forming likely have other explanations.

As in all questions about our origins, scientists’ worldviews color their interpretations of their observations. The existence of blue stars, for instance, argues for a young universe. God’s eyewitness account recorded in the Bible tells us He created the sun, moon, and stars on the fourth day of Creation week about 6,000 years ago. What we actually observe in space (Psalm 19:1) does not contradict this historical account in Scripture, though evolutionary and naturalistic interpretations do. The true interpretation of the things we see, however, will never contradict the truth in God’s Word.