The Secret Lives of Frozen Frogs

Alaskan wood frogs tolerate being frozen and thawed with the physiologic finesse that inspires science fiction scenarios of suspended animation. A recent study comparing the Alaskan frog with its Ohio cousin of the same species has discovered some of the unique adaptations that make this possible. While an ice-filled frog that reawakens with spring will not unlock the way to freeze people for the future, its slushy secrets may shed light on the technology needed to freeze donor organs for transplant.

How to Freeze a Frog

Only shielded from the coldest air temperatures by sheltering beneath debris on the ground, the Alaskan variety of Rana sylvatica, a two-inch frog ranging from the southeastern United States to Alaska, can survive exposure to temperatures below –18ºC (—0.4ºF).1 Two-thirds of its body’s water is drawn from its organs and sequestered to freeze in the abdomen, the lymphatic system, and under the skin. The frog stops breathing, and its heart stops beating. “After the heart stops, there’s no oxygen being delivered to the cells, and no carbon dioxide being removed from the cells and the body,” says Ohio’s Miami University zoologist Jon Costanzo. “They’re in a precarious state, all the cells in the body have to survive without oxygen.” 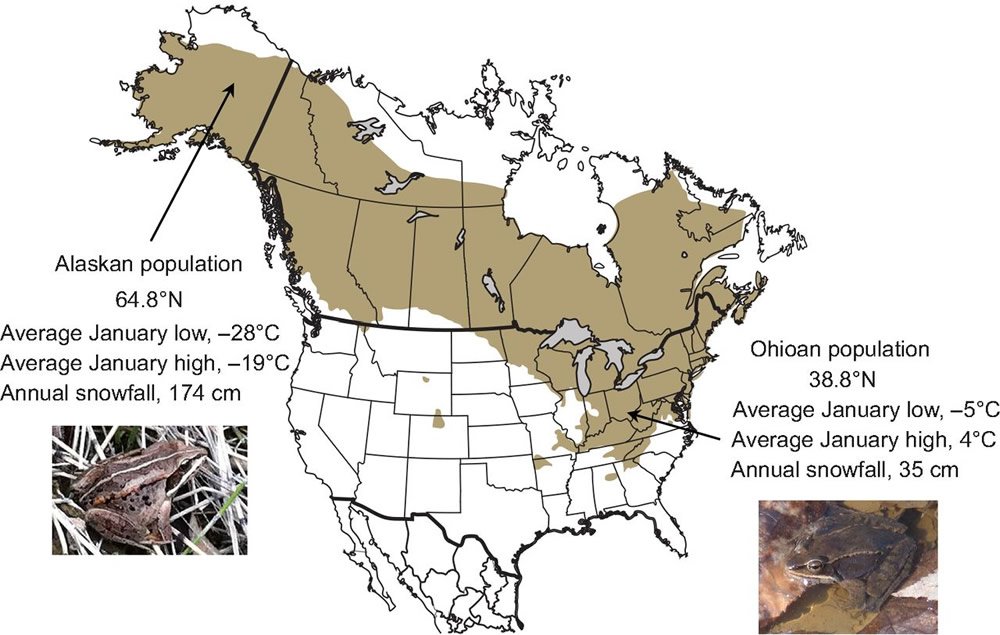 Alaskan wood frogs in Costanzo’s laboratory tolerated prolonged freezing—two months at –4ºC (24.8ºF)—as well as exposure to –16ºC (3.2ºF) and multiple freeze-thaw cycles such as they experience in the wild.2 After enduring these frigid conditions, a wood frog’s heart resumes beating. It regains its normal vigor within two days and energetically sets out to ensure its species’ survival by immediately seeking a mate. “This frog is the earliest breeding frog of all frogs in North America,” says Costanzo. “It breeds in February.”

Only a few cold-blooded vertebrates—the Eastern box turtle, some lizards and snakes, and a few species of frogs—routinely reanimate after being frozen. While researchers suspect the extreme freeze tolerance of the Alaskan wood frog is an exaggerated form of ordinary frog physiologic adaptations, the Ohio wood frog cannot approach the tolerance of the Alaskan frogs. Costanzo’s team revived Alaskan wood frogs after freezing them to –16ºC (3.2ºF), which is 10 to 13ºC colder than Ohio frogs could tolerate.3

Ice crystals would damage cells and fragile tissues, so freeze tolerance is better if an animals’ organs dehydrate. Additionally, the freezing point of fluids remaining in the organs needs to be lowered so they won’t freeze. Cryoprotectants in animals function by lowering the freezing point of fluids in which they are dissolved and by drawing water into places where it can safely freeze. Yet freeze tolerant animals differ in the specific components of their biological antifreeze.

The chemical cryoprotectant cocktail that wood frogs accumulate differs from the collection of cryoprotectants built up in other freeze-tolerant frogs—gray tree frogs of the genus Hyla.4 Gray tree frogs winterize by accumulating large amounts of glucose and glycerol. Alaskan wood frogs instead build up large amounts of glucose and urea and at least one other yet-unidentified osmolytic compound in their body fluids. (Osmolytes are molecules that affect fluid balance; their presence—like any solute—also affects the freezing point of the liquid in which they are dissolved.)

An enormous amount of a complex sugar called glycogen (sort of a string of glucose molecules) accumulates in the liver of the Alaskan wood frog. Dr. Costanzo says, “This frog is like a walking liver.”5 Some of this glycogen gets converted to glucose when the temperature drops. High concentrations of osmolytes like urea and glucose in blood, brain, and other organs prevent freezing. Much of the urea comes from atrophying muscles, a process which would be expected to leave the animal weak and hungry upon waking. Yet wood frogs do not use the stockpiled glycogen as a fuel while hibernating. Instead, once frozen, their metabolism almost ceases, sparing the glycogen as a ready fuel source pending their revival. And once the thaw comes, the massive metabolic “abnormalities” that winterized the frogs reverse and allow the frog biochemistry to become completely normal within five days.6

This “frogsicle” will go “thunk” if dropped. Two-thirds of the frog’s body water is frozen. The biochemistry of its body fluids is by ordinary standards quite out of whack, its organs are dehydrated, it is not breathing, and its heart is not beating. Yet it will be ready to mate within two days of the February thaw. Image by Evelyn Dietz, via ScienceMag.org

These images depict the revival of an Alaskan wood frog after 24 hours at –2ºC. The first was taken just 28 minutes into the thaw as skin and peripheral tissues began to melt. Eyes were blinking after three hours. The frog began using its lungs to breathe in less than four hours. It began moving its legs at around six hours. The second photo here was taken at ten hours, by which time the frog was behaving normally. Images from the time-lapse video at www.units.muohio.edu

“Although some of the mechanisms underpinning freezing adaptation in vertebrate ectotherms [cold-blooded animals] are understood, relatively little is known about the factors driving evolution of this trait,”7 the researchers write. They hope that better understanding of the cryobiological mechanisms that make these frozen feats possible will unveil “important clues to the evolution of the freeze-tolerance adaptation.”8 The evolutionary explanation for frozen frogs must invoke at least two separate evolutionary events, for the specific mechanisms of freeze tolerance differ between frog species, and those species are supposed by evolutionists to hail from divergent amphibian ancestors separated by 78 million years.9

No evolutionary history has been demonstrated here . . . the frogs in question were not only all frogs, they were even the same species of frogs.

Costanzo’s study reveals many factors that must work together perfectly to produce Alaskan frogsicles, but since some of those steps—muscle wasting and dangerously high levels of glucose, for instance—are by themselves not advantageous for survival or reproduction, the evolutionary explanation continues to be elusive. These factors involve coordinated alterations in the activity of various enzymes and the functions of major organs.10 The metabolic adaptations preparing the Alaskan wood frog’s body for frigid winters occur even in the absence of the physiologic stresses ordinarily known to trigger such changes. For instance, amphibians ordinarily accumulate urea when dehydrated, but the wood frogs in this study did so even when fully hydrated.11 Muscle atrophy occurs in them not as a result of starvation but as a regulated preamble to hibernation, yet the frogs awake energetically from hibernation not debilitated but with immediate interest in spawning. This led the researchers to wonder about the evolutionary “cost-benefit implications”12 of this adaptation. Thus, just what survival advantages might accrue to each of the complex physiological steps in cryo-adaptation remain unclear.

The researchers point out that the Alaskan frog’s adaptations may well be enabled by yet-unidentified genetic factors. Freeze tolerant tree frogs—those that use glycerol as a cryoprotectant—are tetraploid instead of diploid like other frogs of their genus, suggesting that duplication of genetic information within that species allows for this extreme adaptation to cold.13 Though the Alaskan and Ohioan wood frogs are the same species, they have differences in their mitochondrial DNA and therefore likely have other genetic distinctions.14

Applying What We Know

From a practical standpoint, insight into the mechanisms utilized to prevent frog brains and livers from freezing may help medical researchers discover how to freeze human organs. This would extend the time available for transplantable donor organs to be matched and transported to the best-matched recipients.

No evolutionary history has been demonstrated here nor has the evolutionary drive for the many interacting components of supposed cryobiological evolutionary adaptation been uncovered. The frogs in question were not only all frogs, they were even the same species of frogs. The claim that different cryobiological mechanisms convergently evolved in other species is unnecessary when one realizes that God created all kinds of fully functional amphibians just 6,000 years ago, not millions of years ago. The study does not explain, much less prove, the evolutionary drive behind the cryobiological adaptations of Alaskan wood frogs. What we glimpse instead is a bit of the adaptive variety available within the genetic makeup of even this single species of frog, variety that allowed for the biodiversity we see in the world to develop from the original created kinds of organisms.