by Dr. Elizabeth Mitchell on May 19, 2012
Share:
Email Using:
Gmail Yahoo! Outlook Other

Khirbet Qeiyafa is an archaeological dig site overlooking the Valley of Elah where David defeated the Philistine champion Goliath in the time of King Saul. Its discovery in 2008 challenged those who claimed no powerful centralized Jewish authority existed 3,000 years ago. Newly discovered evidence suggests Khirbet Qeiyafa was a strong fortress under the control of a newly established Jewish monarchy, possibly the biblical King Saul or King David.

“This is the first time that archaeologists uncovered a fortified city in Judah from the time of King David,” Hebrew University’s Yosef Garfinkel explains. “Even in Jerusalem we do not have a clear fortified city from his period. Thus, various suggestions that completely deny the biblical tradition regarding King David and argue that he was a mythological figure, or just a leader of a small tribe, are now shown to be wrong.” 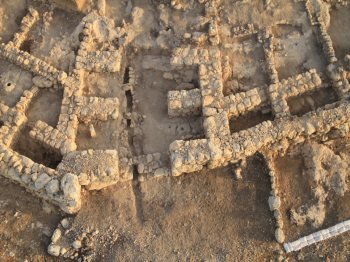 At the time of the David and Goliath encounter, the Philistines were attempting to reassert dominion over King Saul and his people. The Philistine dominion over the Hebrews had lasted several decades. Khirbet Qeiyafa, dated about 1020 to 980 B.C., was an imposing fortress town strategically located near the Philistine border, perhaps the very sort of fortress that would draw a military response from the affronted Philistines.

Writing found at Khirbet Qeiyafa has not named its ruler, but the writing is in ancient Hebrew, not Philistine or Canaanite.

Writing found at Khirbet Qeiyafa has not named its ruler, but the writing is in ancient Hebrew, not Philistine or Canaanite. In contrast to the artifacts of typical Canaanite sites, those at Khirbet Qeiyafa have two Jewish distinctives: the religious artifacts are conspicuously lacking in graven images, and the garbage is conspicuously lacking in pig bones.

Garfinkel and Saar Ganor of the Israel Antiquities Authority consider their new trove of religious artifacts the first definitive archaeological evidence of architectural styles and Jewish religious practices from 3,000 years ago. Although the site pre-dates Solomon’s temple, two miniature “portable shrines” are carved with elaborate external architectural details—an elaborate façade with lions and birds. In fact, experts believe the models may help interpret some of biblical details of Solomon’s temple. 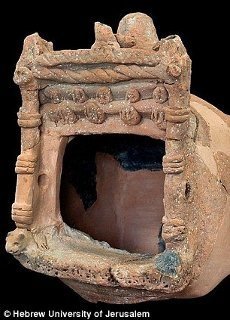 Portable clay shrine with pillars and elaborate façade with stylized drapery and three birds above the entrance and a lion’s head at the bottom left. Image courtesy of Hebrew University of Jerusalem through DiggingsOnline.com.

Such “portable shrines” were common religious objects of the era and usually contained idols. These, however, are empty. Garfinkel says, “Over the years [since 2008], thousands of animal bones were found, including sheep, goats and cattle, but no pigs. Now we uncovered three cultic rooms, with various cultic paraphernalia, but not even one human or animal figurine was found. This suggests that the population of Khirbet Qeiyafa observed two biblical bans—on pork and on graven images—and thus practiced a different cult than that of the Canaanites or the Philistines.” Thus the archaeologists infer the occupants of Khirbet Qeiyafa were Jewish.

Ostraca are shards of pottery on which the ancients wrote. According to translator Émile Puech of the École Biblique et Archéologique Française in Jerusalem, ostraca from Khirbet Qeiyafa imply the rise of a strong new monarchy. For instance, one text expresses the necessity of acceding to higher authority and refers to those who “have established a king.”1 Various ostraca concerning taxation and judicial matters imply centralization of authority “beyond the powers of a ‘petty chieftan.’” Puech’s interpretation would fit either King Saul’s or King David’s administration.

Because the Bible is the complete written revelation of God, not every detail of it appears in the fragmentary findings of archaeology, nor do we rely on archaeological findings to “prove” the Bible. However, archaeological findings confirm and illuminate biblical history. This debris left by people long dead testifies to the truth of God’s Word and their part in His plan. The stones of Khirbet Qeiyafa cry out its ancient inhabitants’ determination to live and worship in a way distinct from that of their neighbors. These people chose to follow God. They were part of God’s ongoing plan to sanctify a people through whom He would preserve written revelation of Himself in the Bible. And through this people, descended from King David as the Scriptures say, God ultimately sent Jesus Christ, the Savior of the world.