What was the early earth like? Was it a seething place of hellish acid, or was it a paradise prepared for man? How can we know? Scientists studying the molecular structure of the ubiquitous enzyme thioredoxin claim that by “traveling back in time”1 they have unlocked a vital clue to our ancient world. 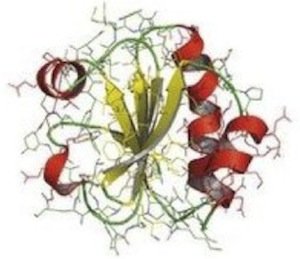 This model represents the 3D molecular structure of a “resurrected” form of the enzyme thioredoxin. Regardless of the organism it is found in, this same geometric structure occurs in all forms of the vital enzyme and is necessary to its function. Image: www.bbc.co.uk

Evolutionary scientists assume that the early earth was a boiling hot acidic place, devoid of oxygen. In that inhospitable environment they presume that random chemical reactions produced stable molecules that somehow came together to form the first single-celled life forms. By analyzing the structure of thioredoxin, an enzymatic protein found in all forms of life, an international team reporting in the journal Structure says it has traced the evolutionary history of thioredoxin back to its ancient beginnings. These “resurrected” proteins are highly resistant to heat and acid, so they believe they must have evolved under harsh conditions, confirming the common evolutionary conception of the early earth’s extreme environment.

“Ancestral sequence reconstruction” is a technique by which the gene sequences that code for a protein in living organisms are used to reconstruct their supposed evolutionary ancestor’s corresponding genetic sequence and the primordial protein for which it codes. This team compared the genetic codes for the forms of thioredoxin found in various presumed evolutionary lineages and hypothesized possible ancestral forms. Having found that their proposed scenario of protein evolution “was sufficiently close to an accepted organism phylogeny [evolutionary tree of life],”3 they decided their effort to peek back through four billion years of evolutionary history had enabled them to accurately define the structures of the original ancestral forms of thioredoxin. After synthesizing several “ancestral” thioredoxins, the researchers studied the “resurrected” proteins’ properties to determine the conditions under which earth’s original proteins presumably evolved.

“We have looked at a number of gene families now, and for all of them, we find the most ancient proteins are the most thermally stable. From this, we conclude that ancient life lived in a hot environment,” explains Georgia Tech’s Eric Gaucher, coauthor of the study.

Thioredoxin, an enzyme that breaks sulfur bonds, is present in most living organisms, whether single-celled or multicellular. A protein molecule’s three-dimensional structure results from the way it folds. Enzymatic function depends on the proper folding of the molecule. Though thioredoxin’s amino acid sequence varies somewhat from organism to organism, the protein’s 3D geometry is the same. If this were not true, the protein would not be able to function properly. In fact, a mutation that disrupts the overall geometric structure of the protein renders it non-functional.

Because of thioredoxin’s consistent geometry, the researchers maintain the “resurrected” versions they attribute to the last common ancestors of various organisms faithfully reflect structures that evolved under harsh conditions four billion years ago and have been conserved all this time. Gaucher says, “A gene can become deactivated by as few as one or two mutations. If our ancestral sequences were incorrectly inferred by having a single mistake, that could have led to a dead gene. Instead, our approach created biochemically active proteins that fold up into three dimensional structures that look like modern protein structures, thus validating our approach.”

In addition, the unfolded thioredoxin amino acid strand is shorter in prokaryotes (bacteria, which lack a nucleus) than in eukaryotes (organisms whose cells have a nucleus). This indicates, the researchers believe, that the evolving primordial protein lengthened as it paved the way for the evolution of higher life forms.

Furthermore, because there is no smooth transition of molecules shown in their series of ancestral thioredoxins, the researchers believe that the heretofore “poorly understood evolution of protein structures” occurred through successful evolutionary jumps—punctuated equilibrium—rather than a continual series of small steps. They write, “We find a remarkable degree of structure conservation up to a time close to the origin of life, a result that seems consistent with a punctuated-equilibrium model of structure evolution in which the generation of new folds occurs over comparatively short periods and is followed by long periods of structural stasis.”4

This study did not, of course, resurrect ancient ancestral proteins. It merely created functional variations of thioredoxin based on some functional forms found in living organisms. The thioredoxins designed by the team reflect modern man’s assumptions, not a protein’s primordial past. The team assumes that evolution happened and assumes that similar molecular structures in multiple species illuminate the evolutionary pathway. This reasoning is entirely circular. So is the assumption that, because the evolutionary path thus traced approximates a particular evolutionary phylogenetic tree, the protein’s evolutionary history and the phylogenetic tree are both confirmed. The team’s trip back through time was purely imaginary.

This study did not, of course, resurrect ancient ancestral proteins.

Molecular clock dating used to calculate the four billion year timeframe is likewise based on the assumption that molecules-to-man evolution occurred in the first place. Additionally, calibration of the molecular clock’s mutation rate requires acceptance of the unverifiable assumptions by which dating methods are interpreted.

Furthermore, even evolutionary scientists suggest that the unusual thermostability of “resurrected” proteins may be an artifact of the assumptions used to create them. Paul Williams and colleagues in the 2006 study “Assessing the Accuracy of Ancestral Protein Reconstruction Methods” reported, “The phylogenetic inference of ancestral protein sequences is a powerful technique for the study of molecular evolution, but any conclusions drawn from such studies are only as good as the accuracy of the reconstruction method. Every inference method leads to errors in the ancestral protein sequence, resulting in potentially misleading estimates of the ancestral protein’s properties.” Thus the heat resistance of reconstructed “ancestral” proteins may be overestimated.5

In the early days of their ancestral thioredoxin research, coauthor Julio Fernandez expressed surprise that this complex molecule was all but unchanged by four billion years of evolution. He said, “Given the ancient origin of the reconstructed thioredoxin enzymes, with some of them predating the buildup of atmospheric oxygen, we expected their catalytic chemistry to be simple. Instead we found that enzymes that existed in the Precambrian era up to four billion years ago possessed many of the same chemical mechanisms observed in their modern-day relatives.”6

Ubiquity Is a Good Thing!

Common designs, however, even at the biochemical level, do not demonstrate evolutionary change. The consistency of thioredoxin structure across the myriad of living things is exactly what we would expect in a world created by our Common Designer, God. The absence of “transitional proteins,” echoing the absence of transitional forms in the fossil record, is a result of the fact that God created each kind of organism with the functional biochemistry it needed.

Naturally, when mutations destructive to this vital enzyme occur, they are not passed on, so of those variations that may have developed over the past 6,000 years, only the harmless ones have been preserved. Yet there is no evolutionary record of increasing complexity in the protein. The longer form of the molecule present in eukaryotes is not proof of evolution but only an illustration that God supplied certain sorts of organisms with a different, longer form of the molecule.

Thus the ubiquitous nature of thioredoxin’s “conserved” functional geometric structure is consistent, not with evolution, but with biblical history. A string of evolutionary assumptions cannot reveal earth’s original nature. God’s Word can, however, and it tells us that God designed a very good world (Genesis 1:31) just 6,000 years ago and on the sixth day of Creation Week, suitable for Adam and Eve to inhabit (Genesis 1:26–29; Isaiah 45:18).

Previous Article Shard Shows Written Language at Jerusalem When David Ruled Next Article Does Your Dog Yawn Because He Cares?