The first trappings of unified royal power in ancient Egypt have been found carved on a rock wall near the village of Nag el-Hamdulab. The site is on the West Bank of the Nile River, north of Aswan, in southern Egypt. Three generations of archaeologists have examined the drawings, but, with the help of modern digital technology, a multinational team has finally tapped into their secrets. The team identifies the king, depicted with his entourage, as Narmer, who is thought to have unified ancient Egypt.

Maria Gatto of Yale University led the team whose findings have now been published in the journal Antiquity. Their research builds on work started in the 1890s by archaeologist Archibald Sayce, who published sketches of the carvings, and the unpublished photographs taken in the 1960s by Egyptian archaeologist Labib Habachi. Gatto’s team went in search of the site depicted in these photos and found seven groups of carvings, some of them vandalized. By analyzing the carvings and Habachi’s photos, the team has identified the march of royal Egyptian authority onto the pages of history, well before the time of the pyramids.

The most extensive carving is a flotilla of five boats—the equivalent of a royal progress or parade in ancient Egypt, where the Nile was the real highway. In the lead boat is a pharaoh—depicted in the usual manner of stylized Egyptian art—wearing a lotus-shaped crown (the White Crown), which symbolized power in southern Egypt (aka “Upper Egypt” because of its location on the upper Nile River). Royal imagery indicating this is a pharaoh includes a man fanning him, two standard-bearers, falcon and bull insignia on the side of the boat, and four men towing the boat with ropes. In addition, there is a hieroglyphic inscription suggesting the flotilla is a royal “following of Horus,” a biennial tax-collecting tour that cemented royal authority. Horus was the falcon-headed Egyptian god said to have bestowed royal power on Narmer, the first king of a unified Egypt.1

This procession of boats contains the royal boat in the lower left (shown close-up below) with the earliest known historical representation of a pharaoh. In the tracing showing the details clearly, note the pharaoh with the lotus-shaped White Crown behind his standard bearers and in front of a servant with a fan. Image credit: Stan Hendrickx, John Coleman Darnell and Maria Carmela Gatto, www.dailymail.co.uk. 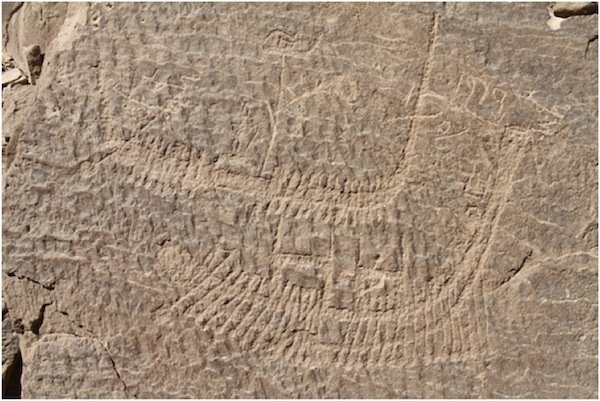 This carving contains the earliest known depiction of a pharaoh. This is the pharaoh’s royal boat, complete with oarsmen, royal insignia, a servant with a fan and two standard-bearers. The pharaoh wears the lotus-shaped White Crown symbolizing power in Upper (southern) Egypt. (Compare to the image in the Narmer Palette and the wider view above to find him.) The flotilla carved on the rocks suggests this pharaoh was consolidating power over the southern parts of his territory before uniting all of Egypt under his rule. Image credit: Stan Hendrickx, John Coleman Darnell and Maria Carmela Gatto, www.antiquity.ac.uk. 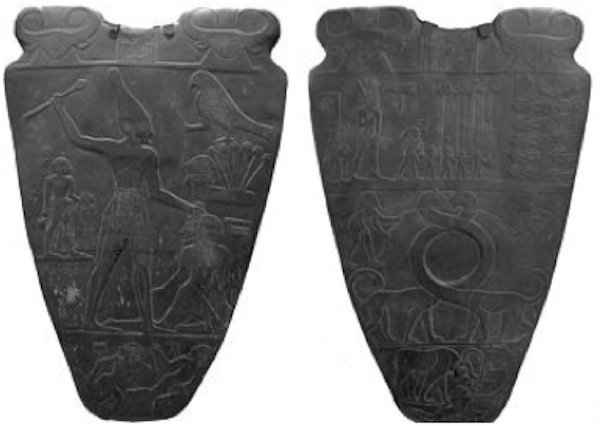 This is a reproduction of the Narmer Palette, found at Hierakonpolis, ancient Egypt’s first capital. This two-foot tall siltstone artifact is covered with relief drawings on both sides, symbolizing the uniting of Upper and Lower Egypt. It shows Narmer, believed to be the first king of a united Egypt (left) wearing the lotus-shaped White Crown of Upper Egypt. On the reverse (right), he wears the Red Crown of Lower Egypt. Use this image to find the pharaoh with the lotus-shaped crown in the carving at Nag el-Hamdulab. Image credit: en.wikipedia.org. 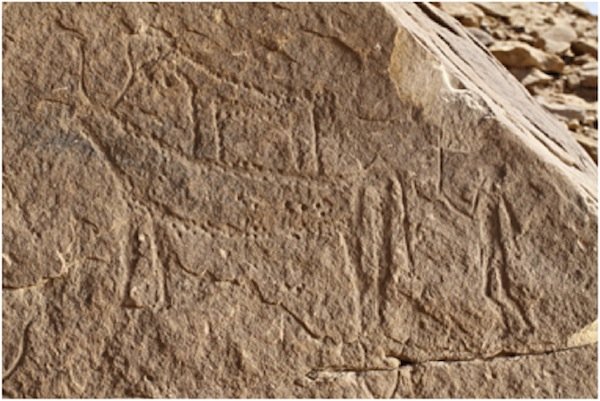 In addition to the crown and insignia, pharaoh’s royal power is symbolized by many cows herded by people and dogs. In this carving, the dog is standing on a cow’s back, and a person with a stick follows them. Be sure to see the entire photo gallery of these fascinating carvings at www.antiquity.ac.uk and additional carvings of wild animals and interpretive tracings at www.dailymail.co.uk Image credit: Stan Hendrickx, John Coleman Darnell and Maria Carmela Gatto, www.antiquity.ac.uk.

This timeline, adapted from the chronology recorded by archaeologist David Down in the book Unwrapping the Pharaohs, shows how the global Flood and subsequent dispersion from the tower of Babel fit in with multiple Egyptian dynasties ruling at the same time in different parts of Egypt. The traditional Egyptian timeline, now in disfavor with many secular and biblical historians, is depicted on the top line. The dates reported for the Nag el-Hamdulab carvings (3200–3100 BC) are derived from this traditional chronology. Narmer (or Menes) should instead be placed at the beginning of the Dynasty 1-2 bar (shown in green), after Babel. Image credit: Dating the Pyramids.

This is Horus, the Egyptian god supposed to have bestowed power to the first pharaoh. On the falcon head are both the Red and White Crowns, symbols of power and Egyptian unity. Image credit: Wikipedia.

Gatto explains the political significance of these two depictions of the king. “It seems that for Narmer it was important first to settle the situation in the South, to control the South, and then apparently move to the North, and at that time he unified Egypt and we have the first dynasty.” The Nag el-Hamdulab carvings likely predate the Narmer Palette because the royal figure wearing only one crown is nevertheless surrounded by ancient Egyptian symbols of great power, such as the boat parade and a procession of wild and domesticated animals. “It’s really the end of prehistory and the beginning of history,” Gatto says. (We have the written biblical record, of course, so this time is not really “prehistory.”)

The Nag el-Hamdulab scenes are unique, and bridge the world of the ritual Predynastic Jubilee in which images of power—predominantly boats and animals—are the chief elements, and the world of the royal pharaonic Jubilee, in which the image of the human ruler dominates the events. . . . The Nag el-Hamdulab cycle is the last of the old nautical Jubilee cycles of the Predynastic Period, and the first of the pharaonic cycles over which the king, wearing the regalia of kingship—here the oldest form of the White Crown—presides. The Nag el-Hamdulab cycle is also the first of such images with a hieroglyphic annotation.2

Based on the style of the artwork and inscription, Gatto dates the carvings to 3200–3100 BC. The dates for such ancient Egyptian events are primarily based, as we have discussed in a number of articles, on sources recorded by Manetho in the 3rd century BC and misinterpreted as a chronological account by later historians. Manetho recorded a number of dynasties that likely co-existed in various parts of Egypt, so Egyptian history appears by his accounts to reach back farther than other ancient historical records—both biblical and extra-biblical—would indicate. (See the references linked below for more information about the discrepancies between traditional Egyptian timelines and both secular and biblical sources.)

The global Flood, based on the biblical record, occurred around 2348–2300 BC. Dispersion from the tower of Babel occurred some time after the Flood. Among those to depart from Babel would of course have been the first inhabitants of Egypt.3.

Some think the biblical Mizraim—Noah’s grandson—and Menes could be the same person, but we cannot be sure. We do not know how many years elapsed before the people who dispersed from Babel to settle in the northeastern portion of Africa became politically united. In any case, the Red and White Crowns symbolized the king—known to us as Narmer or Menes—who ultimately united the northern and southern regions of Egypt. He was the founder of Egypt’s first dynasty. Therefore the carving may well depict this ruler on the eve of acquiring power over the land nourished by the Nile River. The date for that landmark political event must of course be after the time of the global Flood.