Egypt or Babel: Which Came First?

Reconciling Ancient History with the Bible

Most nations celebrate the year they were founded, whether Rome in 753 BC or the United States in AD 1776. Such dates help us to understand who we are and how we stack up in comparison to other nations.

Which Was the First Nation?

Down through the millennia people have defended the supremacy of their own nation by claiming their own culture was established before all the others. Back in the third century BC, for example, something of a “chronology war” broke out, as chronographers in Egypt, Mesopotamia, Greece, and Judea vied for rights as the earliest nation.1 Flavius Josephus, in his Antiquities of the Jews and Against Apion, made similar arguments for the Hebrews in the first century AD.

Despite their efforts to put their nation first, these writers failed. The pivotal date that puts the history of all nations in perspective—the date that people were divided at Babel—remains elusive to this day.

What do we know for sure about the timeframe of Babel in the history of nations? The Bible holds the key. Consider the following:

Peleg and the “Division of the Earth”

It’s not hard to see why this interpretation is so widely held. The mention of Peleg falls in the midst of a chapter devoted to the dividing of nations. The genealogy is thought to be an introduction to the Babel account, summarizing the key people who were at Babel and split up as a result of Babel. The genealogy in Genesis 10 flows right into the Babel narrative in Genesis 11 with the comment that “the earth was of one language” (Genesis 11:1).

In fact, it would be more natural to divide chapter 11 so that the first 9 verses go with chapter 10, and the rest of the chapter goes with the next chapter on Abraham (modern chapter divisions were not added to the Bible until the late Middle Ages). So the “dividing of the earth” in 10:25 seems most naturally to refer to the dividing of the “one language” mentioned in 11:1.

The Bible gives us no more specific information on when Babel occurred.

The Bible gives us no more specific information on when Babel occurred—namely, it falls between the Flood and the time of Abraham, probably near the midpoint (around 2200 BC), give or take a century.

The Bible’s history gives far fewer years before Abraham than the ancient histories of other cultures, such as the king lists of the Sumerians and the Egyptians. However, it seems that priests and writers of these other histories purposely stretched their dates and histories, perhaps to show that their own culture was superior to all others.

Some of the earliest people in each of these king lists were deified as gods, and many were given life spans of thousands and tens of thousands of years. There are different versions of the lists with different numbers of kings, and overlapping reigns are listed sequentially as though they did not overlap.2 The result is extremely long genealogies compared to the biblical chronology.

These genealogies also have problems correlating with ancient records of astronomical events. Both Egyptian and Mesopotamian cultures, for example, made rather careful observations of eclipses, occultations, and the setting of stars and planets during the reign of each king.

We now know astronomical motions so precisely that we can calculate these events far back into ancient history. But the astronomical events do not match the king lists of either Egypt or Babylon. However, this mismatch makes sense if record-keepers extended their king lists by decades or centuries beyond the actual reigns, and therefore beyond the biblical chronology.

Not only are these secular histories stretched in time, but they do not mention the division of languages. So, although the Bible doesn’t precisely date Babel, no other source does either. This makes the biblical dating of Babel—within a century of the midpoint between the Flood and the birth of Abram—the most precise date that we have. 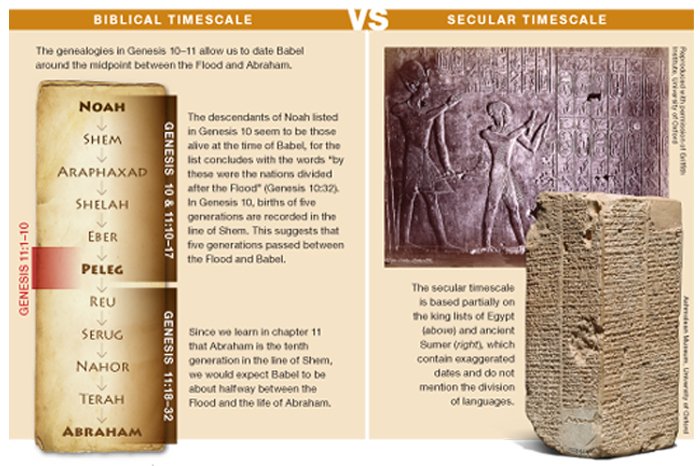 Previous Article What Did the Tower Look Like? Next Article Dating the Pyramids