Because sungrazing comets closely approach the fiery heat of our sun, they tend to put on a great show. Much of their ice melts to leave a magnificent tail of dust and gas visible from earth. Discovered on September 21, 2012, by astronomers at Russia’s International Scientific Optical Network observatory and confirmed by additional observations, the sungrazing comet C/2012 S2 (ISON) is streaking toward our sun. It is set to swing within 1.16 million miles of it in the weeks before Christmas 2013. The comet should reach its closest point (perihelion) on November 28, 2013. 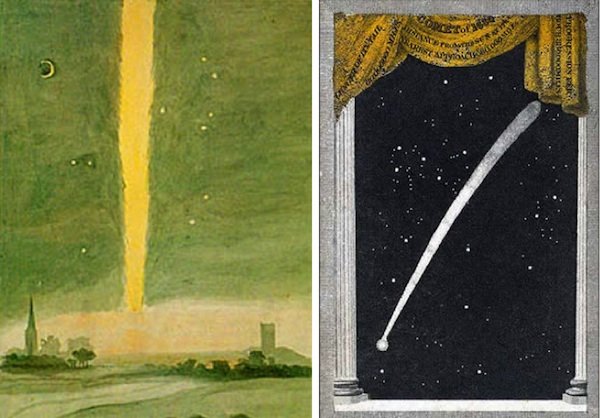 The painting on the left, by the 17th century Dutch painter Atlas van Stolk, depicts the famous comet of 1680. The nighttime view of it on the right was drawn by a contemporary English observer. The comet was bright enough to be visible during the day. Image credit: www.jwwerner.com. 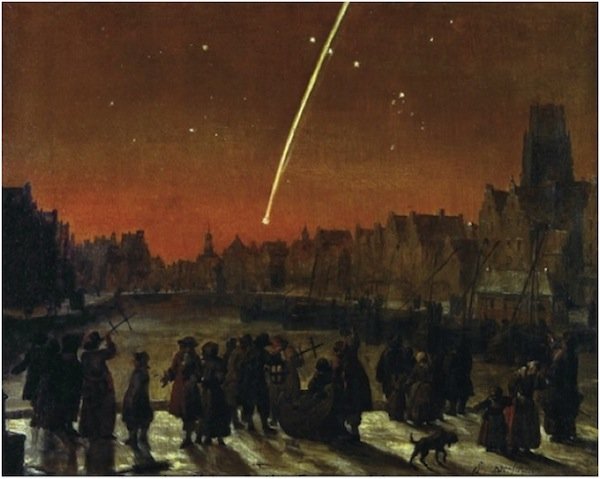 Notice in this painting of the 1680 comet over Rotterdam by Lieve Verschuier that many observers held a Jacob’s Staff (Cross-staff), an instrument ordinarily used in navigation to determine latitude by measuring the height of the North Star above the horizon. Perhaps the people were attempting to determine the comet’s altitude or to estimate the length of its tail. Image credit: www.jwwerner.com.

Experts predict the Christmas comet, which has yet to actually acquire a nickname, will rival the Great Comet of 1680. That comet frightened many people but delighted Sir Isaac Newton, who saw the comet as a way to observationally confirm his theories of gravitation on a truly grand scale. Newton, a Bible-believer who believed God created an orderly universe, saw the hand of God manifested in his discoveries. Newton, one of the greatest scientists of all time, soon afterward published his theory of gravitation in Principia Mathematica. He was able to include this comet as an observable example supporting his theories.1

Contemporary reports of the 1680 comet include many eyewitness accounts in writing and in art. In his book The Dutch and Quaker Colonies in America, John Fiske describes observations of the comet by the Dutch settlers of Manhattan:

At first it was tailless and dim, like a nebulous cloud, but at the end of a week the tail began to show itself and in a second week had attained a length of 30 degrees; in the third week it extended to 70 degrees, while the whole mass was growing brighter. After five weeks it seemed to be absorbed into the intense glare of the sun, but in four days more it reappeared like a blazing sun itself in the throes of some giant convulsion and threw out a tail in the opposite direction as far as the whole distance between the sun and the earth.2

Astronomy Now is predicting this sungrazer’s arrival will be “a once-in-a-civilization’s-lifetime event.”

Astronomy Now is predicting this sungrazer’s arrival will be “a once-in-a-civilization’s-lifetime event.” The best views in the Northern Hemisphere are expected to be those as the comet blooms during its approach to the sun, and astronomers predict the bright visitor to our sky could appear brighter than a full moon.3 By the day after Christmas, it should be 39,000,000 miles from earth.4 It should remain visible to the naked eye until mid-January 2014.5 Also expected in 2013 is Comet Pan-STARRS (C/2011 L4), set to show up in March, but the Christmas comet should outshine it.6

The Scientific American article describing the comet and reprinted on numerous websites opens with the words, “As it flares out of the distant Oort Cloud . . . .” As with the comet expected in March, this comet’s current path is typical of the path that would be expected in a comet originating from the hypothetical comet birthplace. Doubtless these words are merely an introductory comment by the journalist, as the Oort cloud has never actually been observed.

The Oort cloud was hypothesized as a birthplace for long-period comets, for if the solar system were really as old as currently conventional cosmology claims, such comets would have fizzled long ago. The ne’er-been-observed Oort cloud is supposed to be located at the outer reaches of our sun’s gravitational influence. Astronomer Dr. Danny Faulkner of University of South Carolina Lancaster, who will soon be joining the full-time staff of Answers in Genesis, says,

This sungrazer comet has an orbit that's virtually parabolic, as near as we can tell. That means that its orbital path extends very far out from the sun, which, if the Oort cloud exists, would be in the region of the Oort cloud. However, more than 25 years ago the late Carl Sagan observed that there is no direct evidence that the Oort cloud exists. The situation hasn't changed since then. I'm looking forward to this comet. Its orbit is very similar to the great comet of 1680. If this comet behaves in even a remotely similar manner to that comet, we will be in for quite a show.

The year 2013 promises to be a great year for observing stellar events. It will also be a good time to remember that these comets could not survive for millions of years. As the time of their appearance draws close, we will surely see the appearance of “educational” programs with convincing computer graphics explaining the Oort cloud origin for such comets. Children at school will learn about comets—for the sky will be a great place for all to observe—and they also will hear about the Oort cloud as if its existence were documented. But we should remember that the only reason to propose the existence of the Oort cloud—which has additional problems you can read about at “More Problems for the ‘Oort Comet Cloud’”—was to explain how these fascinating comets could exist in a universe billions of years old. Their very existence, however, is consistent with a young creation as described in the Bible.