Catastrophically buried together thousands of years ago, dino-mom and eggs come to light.

Bright purple with red-tipped claws, a newly discovered species of crab has been added to the list of truly photogenic creatures. German taxonomist Hendrik Freitag has carefully catalogued the characteristics of crabs collected in the Greater Palawan province of the Philippines and found four new species of the freshwater crab genus Insulamon, bringing the total known species to five. (The other four vary in color but are mostly shades of purple.)

Greater Palawan consists of a mainland region and several nearby islands, probably providing opportunities for geographic isolation that facilitated speciation. Freitag’s analysis focused not on color but on the structural characteristics of the five species, which differ slightly from each other in fairly subtle ways. “Insulamon palawanense . . . is the most widely distributed species on Palawan Island and might therefore be more variable than the other species of the genus that appear more restricted to intra-island biogeographical subregions,” Freitag reports.1 No information is yet available regarding the question of interspecies reproduction, but there is no reason to assume they couldn’t still interbreed. The size of the five crab species varies, but all are in the one to two inch range.

Though Freitag’s study published in Raffles Bulletin of Zoology makes no ancestral evolutionary claims, he told National Geographic, “The particular violet coloration might just have evolved by chance, and must not necessarily have a very specific function or reason aside from being a general visual signal for recognition.”2

Insulamon palawanese, male specimen of a newly discovered species in the Philippines. Image from Hendrik Freitag through Yahoo! News.

“It is known that crabs can discriminate colours,” Freitag explained. “Therefore, it seems likely that the colouration has a signal function for the social behaviour, e.g. mating. This could explain why large males of various Insulamon species are more reddish compared to the generally violet females and immature males.”

Indeed, to say the purple color “might have just evolved by chance” is just a statement of what all evolution is supposed to be—the accumulation of randomly occurring changes. Three of these species, are restricted to specific creeks, geographically cut off from other Insulamon crabs because they can only survive in freshwater.3 Such isolation can promote speciation. But that has nothing to do with evolution of new kinds of creatures. 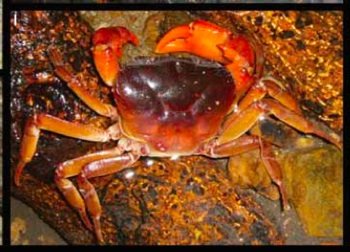 Another male specimen in the Insulamon genus. This newly discovered species is Insulamon johannchristiani. Image from Hendrik Freitag, The Raffles Bulletin of Zoology.

These new species and their fantastic photographs provide an opportunity to appreciate the biodiversity that can develop within a created kind. Creationists are sometimes wrongly accused of claiming that animals don’t change. In reality, variation and speciation do occur within created kinds, but no evidence shows new “kinds” evolving. Nevertheless, impressive variation can occur, especially when isolation of creatures with particular characteristics occurs. No new information is created, and some may even be lost, but the result can be greater biodiversity, all without benefit of either eons of time or upward evolution.