Four for One, One for All

If you’ve ever seen one up close, you’ll understand why the Portuguese man-of-war is the terror of the high seas. It’s actually not a single animal but a colony working together for the good of the whole and the dread of all-comers.

For most U.S. citizens, the word colony invokes images of early America. The Mayflower, our first Thanksgiving, the Revolutionary War. Bonnets and muskets, and living off of the land. But there’s another image the word conjures up, at least to biologists—an image of a creature that is mysterious, dangerous, and astounding.

Whatever you do, don’t call them jellyfish. That name is a misnomer. They are not “true” jellyfish. And though they can be found off the coast of Portugal, they are most commonly found in the tropical and subtropical waters of the Pacific and Indian oceans. They also can be found in the northern Atlantic Gulf Stream. Wherever the ocean is warm, chances are you’ll find them.

The name man-of-war is also misleading. They certainly aren’t men, and they don’t go to war. In fact, they aren’t even individual animals! A Portuguese man-of-war is actually a floating colony.

A Portuguese man-of-war is not just one animal. It is actually a floating colony of four types of animals.

Amazingly, each man-of-war is a collection of four types of animals. These animals are called zooids, and they make up a colony. Each zooid has a different role in the life of the colony. One is the balloon that allows the whole colony to float safely near the ocean surface. Another directs the tentacles that catch food and ward off predators. A third is responsible for digestion. And finally, the fourth zooid produces the next generation of men-of-war.

To share information and food, the four zooids are connected to a hollow central stem. This stem not only connects the zooids to each other but also serves as the communal stomach for each zooid. Without this common bond, the four zooids would die.

But how did these distinct, yet connected animals ever learn to function together? What now makes them one of the most feared colonies on the seven seas . . . or at least the tropical and subtropical seas? 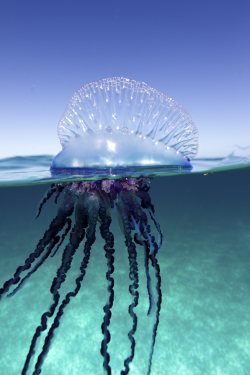 While the man-of-war’s tentacles are dangerous to most creatures, these fish are immune to the toxin. They live in the tentacles for protection.

Pneumatophore is the most recognizable zooid of the man-of-war colony. It is the gas-filled, translucent sack that allows the colony to float at the ocean surface. The sail bubble is usually 4–12 inches (9–30 cm) long and rises up to 6 inches (15 cm) tall.

Often tinted blue, purple, or pink, it doubles as a sail, catching both air and water currents to move the colony over the briny deep. These sails can be right or left “sided,” similar to people’s right or left-handedness. Left-sided men-of-war drift 45 degrees to the right of the wind, while right-sided ones drift to the left. This simple difference allows the colonies to spread out more evenly, reducing swarming.

The sail also plays an important role in defending the colony. When winds become too severe, or if a predator swims by, the sail can deflate itself, allowing the colony to sink under the water to escape the danger.

Dactylozooid is the second most well-known part of the colony. This zooid makes up the long tentacles that drag underneath the sail. These tentacles can reach lengths up to 165 feet (50 m), though more typical lengths are around 30 feet (10 m).

The tentacles are constantly “fishing” through the water, searching for small fish and plankton (tiny, drifting organisms that fill the oceans). Each tentacle is covered with stinging cells, called cnidocytes, which are very similar to jellyfish stingers. When a tentacle brushes against something solid in the water, the cell launches a barb attached to a thread. A toxin is then squirted through the thread into the hapless victim. If the man-of-war has caught a snack, then the tentacles contract to bring it up to the next zooid for digestion.

How does the man-of-war keep from stinging itself? It takes a bit more than a brush to fire the barb. The barbs are attached to sensors that detect chemicals from potential prey. The sensors must detect these chemicals before the barb will fire.

Next, the gastrozooid steps up to digest the prey captured by the tentacles. This zooid is much shorter than the tentacled zooid but just as active. Rather than a bunch of tentacles, it looks like a bunch of worms with flexible mouths on the end of each worm. The resting size of each mouth is roughly the thickness of a dime (1–2 mm), but when food is nearby, it expands to nearly a full inch (20 mm)!

If the catch is a fish, several mouths will grab the fish at once, covering the entire creature. They then begin secreting digestive enzymes to break down all the proteins, carbohydrates, and fats in the fish. Once the fish has been liquefied, the mouths suck down everything left over and send it to the communal stomach, where the nutrients are shared throughout the colony. Once everything nutritious has been used up, the leftovers are expelled out of the mouths.

Though the Portuguese man-of-war typically eats only small fish and plankton, it is willing to try to digest almost anything that comes into contact with its tentacles.

The Portuguese man-of-war is not a single animal but a colony. Four different kinds of animals, called zooids, play different roles in the life of the colony. One is the gas-filled sack that allows the colony to float (pneumatophore). The next kind of animal provides the tentacles to catch food (dactylozooids). Another one helps to digest food (gastrozooids). And the fourth type helps with reproduction (gonozooids).

These elegant yet frightening designs remind us how radically everything has changed since Adam’s sin introduced death and suffering into the world. All creatures, including the man-of-war, once lived in peace with all other animals, eating only non-living things like plants and bacteria. How their roles have changed!1

The gonozooid is the last member of the colony. Though not much else is known about the reproductive cycle of the Portuguese man-of-war, scientists do know that each colony is either a male or female.

The gonozooid has all of the information needed to reproduce all the other parts of the colony. This strange cycle happens in two phases.

The first phase starts when a large swarm of colonies gathers. In the dense gathering, the males and females produce many larvae. This allows for each species’ genes to be constantly reshuffled, preventing inbreeding.

In the second phase, each larva finds a flat, stable surface, often on the ocean floor. It attaches to the surface, growing into a “plant.” Each “plant” actually produces many new colonies, allowing the population to grow rapidly.

It takes all four animals to form one creature. They are distinct from each other but they cannot survive on their own.

The Portuguese man-of-war is a beautiful example of God’s foresight and care. Though four, they are one. They also shine as a reminder of God’s design for cooperation and common purpose among believers. Being many, we are one in Christ (Romans 12:5).

What Is a Jellyfish? 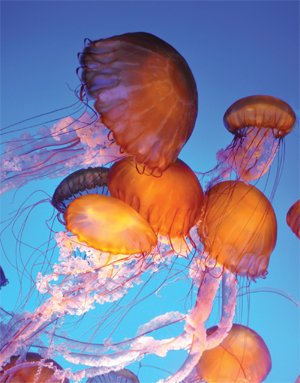 The Portuguese man-of-war is not technically a jellyfish; at least it is not a “true” jellyfish. The man-of-war belongs to a large group of similar creatures (of the subphylum Medusozoa). This grouping is divided into four classes, but only one of them includes the true jellyfish.

The man-of-war is a Hydrozoa, which consists primarily of colonial creatures made of several zooids connected together.

True jellyfish are single organisms that belong to the class Scyphozoa, which includes moon (or common) jellyfish and lion’s mane jellyfish. They have stingers and two life phases like men-of-war, but their dome-shaped bodies display a beautiful four-part symmetry.

There are two other classes. The first, Cubozoa, are square-shaped creatures known for their extremely potent venom, like the Irukandji jellyfish and box jellies (also known as sea wasps). Staurozoa, the second, have unique life cycles and live out their days attached to the seafloor. They look more like sea anemones than jellyfish.

Heather Brinson Bruce earned dual degrees in English and chemistry from Clemson University. She writes and edits for Answers magazine as part of the full-time staff.
Previous Article Created Creature Next Article My Bionic Ear