Everyone loves a light show. The Creator’s first words were “Let there be light,” and on Day Four He filled the night sky with light. There is no place where His light is not seen, and we now know that includes the depths of the sea.

Before modern cameras and technology, the inky blackness of the deep barred its mysteries from human eyes. But now these wonders are coming to light. For the first time, our generation is privileged to behold this alien world, teeming with life. These bioluminescent sea creatures live in a world we are just discovering. 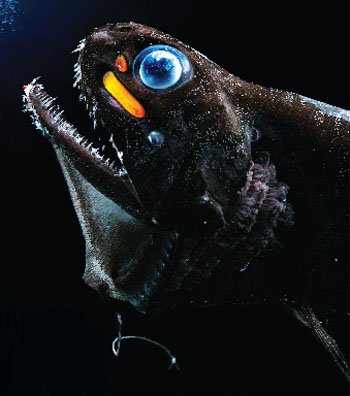 The dragonfish has three separate light organs beneath each eye. Two of them shine red lights, like night scopes, which help it sneak up on prey that see only blue lights.

As the Johnson Sea-Link submersible plows through the dark water, hundreds of feet below the surface, lights flash constantly all over the front of the camera. Surprised by the alien craft, tiny creatures spark and flash in protest. Ninety percent of deep-sea creatures may produce some sort of light.

This light amazes scientists. On land only a few creatures, such as fireflies and glowworms, possess this miraculous ability. But in the deep, where sunlight never penetrates, God has designed a variety of alternative light sources.

Light is essential for most animals’ survival—finding food, avoiding danger, and locating a mate. Deep-sea animals possess lights for all these purposes; and in fact, some creatures are equipped with several different lighting systems. 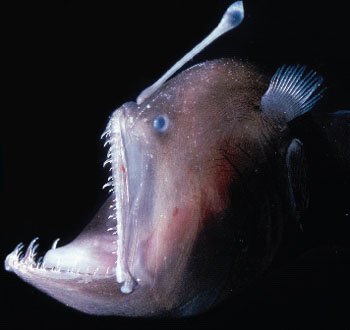 Search for Food: In the dark of the deep ocean, the anglerfish dangles a lighted bait to attract its next meal.

Predators often carry lights to spot potential meals. Located around the eyes, these lights work rather like car headlights to pierce the darkness, exposing something to eat.

Other predators are more cunning. The deep-sea anglerfish, for example, dangles a bright lure near its mouth, waiting for its next meal to fall into the trap. Certain squid, such as the whiplash squid, dangle lights at the end of their tentacles like a wriggling harness of fishing bait. Similarly, the stinging tentacles of some jellyfish light up to attract curious prey.

Since many creatures of the deep are translucent, it might be a bad idea to eat glowing creatures and then swim around with illuminated internal organs that would attract bigger fish. So, many of them contain red or black pigments in their internal organs to absorb the light from creatures they consume. 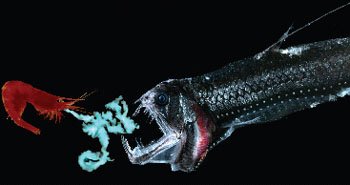 Avoid Becoming Food: Spewing out a batch of glowing chemicals, a deep-sea shrimp (left) can temporarily distract a viperfish (right) while it escapes.

You might think that only predators would have a use for light. Since so many nasty creatures are attracted to light, why reveal your own location? Light actually can offer several creative options for protection.

Some animals can flash their lights to startle would-be predators. Others also use light as a decoy. For instance, the vampire squid emits spurts of luminous secretions from its arm tips to distract attackers while it makes its getaway. Shrimp-like creatures called cypridinids can spew puffs of light, blinding or distracting the enemy.

When frightened by a fish, a furry-looking marine worm (Swima bombiviridis) drops bombs of bright green light from its gills. The startled fish will most likely attack the glowing green bombs while the worm swims away unharmed.

Another creative way to use light is the “burglar alarm” response. When threatened, creatures like the deep-sea jellyfish (Atolla wyvillie) will light up so that an even bigger predator will hopefully see the unwelcome suitor and pursue it. These dramatic displays are visible up to a football field away (300 feet, or 100 m). Who wouldn’t be interested in such a meal? 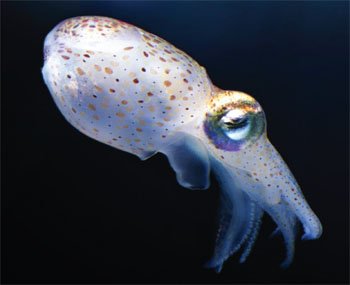 Borrowing Light: The Hawaiian bobtail squid does not produce its own light. Instead, a special organ in its body collects and feeds bacteria that glow.

Probably the most interesting use of light for defense is called counterillumination. This magic trick contradicts what you might expect—these creatures use light to disappear.

Here is how it works. Imagine that you are a hungry sea monster looking up to see if any creatures are swimming overhead. Against the shimmering moonlight in the background, it is easy to see the black silhouette of a fish.

The solution is to illuminate the body parts that would give away your location. When a predator looks up, instead of seeing a shadow, it sees water illuminated by the same kind of light as the moon. Several fish and other sea creatures, such as the Hawaiian bobtail squid, have this uncanny ability.

Attract a Mate and Other Communication 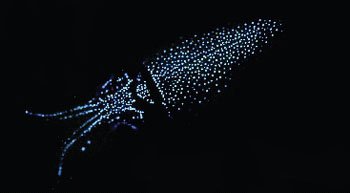 Communication: With its elaborate light display, the firefly squid puts on a show that helps attract a mate and intimidate rivals.

Many of the light-producing tools that help with attack or defense have other useful purposes. For instance, the lure of the anglerfish also attracts mates, and the shrimp-like Cypridinids eject puffs of light during their mating rituals.

The firefly squid (Watasenia) provides an especially spectacular display. Flashing blue lights ring its body. Indeed, celebrations are held in Japan to honor this luminous squid. The flashing lights are thought to be used for defense, but recent evidence indicates that their eyes are sensitive to blue light, supporting the idea that the lights are also used for mating and possibly other forms of communication to share their position or the location of prey.

Most deep-sea creatures produce blue light because this wavelength travels the farthest in the water and is easiest to see. The ominous-looking dragonfish, however, produces a red light that illuminates unsuspecting prey. This wavelength cannot normally be detected by other fish in the deep ocean. But the eyes of dragonfish are tuned to see it, leading scientists to believe they could communicate with other dragonfish.

These complex mechanisms point dazzlingly to the Creator, who first spoke light into existence. Many light-producing marine organisms use a built-in chemical system, which relies on a type of molecule called luciferin. (This term is derived from the Latin word lucifer, which means “light bringer.”) To work, this chemical needs to combine with oxygen, requiring a separate enzyme called a luciferase. Luciferins are somewhat similar in every creature, but the luciferase enzymes can vary widely. Indeed, evolutionary biologists are forced to conclude that variations of this chemical process, called bioluminescence, must have evolved independently at least forty times.

Not all bioluminescent creatures produce their own light. Some have light organs, where they nurture one of the glowing species of bacteria, which they collect from the ocean. In a complex process the light organ essentially filters out unwanted bacteria in favor of the light-giving bacteria.

Further complicating this picture is that light production must be highly controlled.

Further complicating this picture is that light production must be highly controlled. After all, the organism does not want to light up at the wrong time. In the Hawaiian bobtail squid, the bacteria Vibrio fisheri give off light only when they reach a certain concentration within the light organ. When the squid does not need the light, it expels some of the excess bacteria, causing the light reaction to stop. The glowing Vibrio fischeri bacteria were also designed with special genes and control factors that not only make luciferin and luciferase but also control the timing of their light response.

Because so many of these designs are useful for predator-prey relationships, it might appear that they were created for post-Fall survival only. But remember the other use mentioned. The ability to communicate suggests a pre-Fall purpose.

Though sound is the most efficient way to communicate in the ocean over long distances, light has several advantages. For instance, it could be more useful for private communication among creatures who share the ability to detect the same wavelengths of light, like a channel on a walkie-talkie.

Another possible pre-Fall use would be the tagging of discarded shells ready for disposal. Hundreds of species of sea creatures produce shells that would otherwise clutter the seafloor. Some small shrimps, crabs, and other shelled creatures carry bacteria that produce light on their shells once they are discarded. It appears that this system may have been designed to alert other creatures who help break down the shells.

Light is a marvelous communication device. Most importantly, it shouts of God’s glory, which He instilled into His creation (Psalm 19). Whether the stars of heaven or the beacons of the deep, all point to the God who gave us light. These lights are beautiful reminders that God has conquered the darkness through Christ, giving us the hope of light and life that can never be quenched. “The light shines in the darkness, and the darkness did not comprehend it” (John 1:5).

Dr. Joe Francis, Chairperson of the Department of Biological and Physical Sciences and Department of Mathematics at The Master’s College earned his PhD from Wayne State University and completed a post-doctoral fellowship at the University of Michigan Medical School. Dr. Francis serves as a board member of the Creation Biology Society.
Previous Article Neanderthals vs. Humans: Are They Different? Next Article Hebrew Scholars: 24-Hour Days in Creation